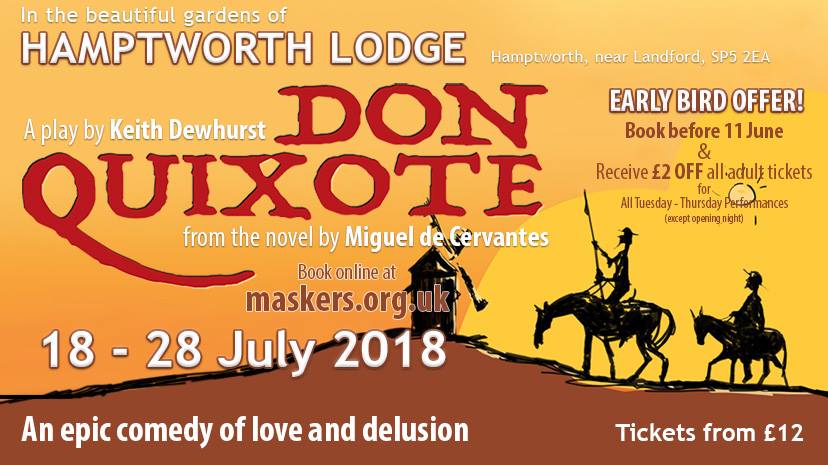 Eccentric Alonso Quijano is passionately enthusiastic about tales of medieval knights and their fantastic adventures: slaying giants, fighting evil wizards, rescuing maidens and chivalrous knights saving the day. Slipping into a state of mind where the lines between reality and fantasy start to blur, he takes on the persona of Don Quixote de la Mancha and sets off with his loyal servant, Sancho Panza, to rid La Mancha’s towns and villages of giants, villains and injustice in a world where windmills become giants, inns become castles and madcap adventures abound. While he ignores all of Sancho’s sage advice, his friends create ever-increasingly frantic ruses to lure him back to his bed, attempting to cure him of his apparent insanity!

I strongly suspect that I am not the only person to instantly recognise the name of Don Quixote but who had very little pre-knowledge of the story, character or the play (possibly the reason why this was a small audience on opening night). Director Rubin Sanchez-Garcia’s programme notes inform us that – as Shakespeare’s plays are to British students – Miguel de Cervantes’ novel of Quixote’s adventures is a well-known school text for Spanish pupils, but that – unlike Shakespeare’s plays, which are written to be performed not read – Cervantes’ novels are not written for the stage and that “any theatre adaptation faces enormous challenges”. This is a challenge that Maskers’ Theatre Company accepts, takes on and achieves with great style.

Neil Quinlan, no stranger to the stage but here making his debut for Maskers, gives a strong performance as Quixote, encompassing senility, madness, bravado and passion in equal measures. Colin Russell is excellent in his comic timing, intonation and asides to the audience as Quixote’s humorous, wry and faithful servant, Sancho; despite all his prudent wisdom being completely ignored by Quixote, he is eager to have adventures abroad (with governorship of his own island his promised reward) rather than stay at home and be hen-pecked by his domineering wife, Teresa. Kate Grundy-Garcia is splendid as Teresa: feisty and powerful, definitely the one who wears the trousers in the relationship! Quinlan and Russell make a convincing duo and embrace the physicality of their characters’ adventures with enthusiasm as they throw themselves into slapstick fights.

This is a real ensemble production, with only Quinlan and Russell portraying one character apiece. The rest of the cast take on multiple roles, each distinctive and credible in their individual characters, with Adam Taussik (named as Don Diego), Angela Stansbridge (named as Maritornes), Alan Watson’s Curate and Millie Grundy (Quixote’s niece) being particularly memorable. The entire company gels together very well, and Sanchez-Garcia makes great use of the different levels of Hamptworth’s beautiful garden setting to stage, with equally skilled direction of comedy and pathos, the fantastic adventures of Don Quixote.

The costumes are a terrific reflection of 16th century Spain, enhanced by excellent props and set dressing. The set itself, except for a moving windmill, is minimal but when the venue itself provides such a perfect setting for this production, any additional scenery would be superfluous.

It is difficult to light an outdoor production with any subtlety when the days are long and natural daylight persists into the night, but Clive Weeks succeeds in Act 2 to bring impressively atmospheric lighting effects to the scenes as dusk falls. Sound is rarely noticed during a production unless it goes badly, but here again Maskers are blessed with the skills of sound designer Jamie McCarthy; the sound effects are excellent, perfectly balanced, location-specific and impeccably timed, mics amplify the voices to reflect the cast’s excellent diction and projection, and the combination of pre-recorded and live music adds the ideal final touch to the production.

There may have been some moments on opening night where the pace became a little stilted and lines seemed a tad laboured, but I am confident that this will flow more naturally and smoothly as the cast gain in confidence and momentum. I have attended numerous summer outdoor performances by Maskers over the years and this was the smallest audience that I have seen in recent memory; that is such a shame, as this is a very entertaining production and fully deserves to have much larger audiences. With the wonderful setting of Hamptworth Lodge, warm summer evenings and even the parched lawns bringing a touch of Spain to the usually green Hampshire countryside, this is a great way to relax and be entertained by a very talented group of performers.