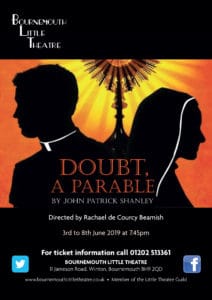 It’s a real privilege being asked to review plays for Scene One. I get to see plays I wouldn’t normally go to see. I’d never heard of this play which seems a little surprising given it’s so current and on topic considering historical child abuse cases perpetrated by clergy back in the ‘60s. I definitely wouldn’t have gone to see Doubt, A Parable… …probably. Which would have been a shame.

It’s always a marvel BLT can fit any set onto their tiny stage and what they did fit was an excellent, very cleverly conceived set that, with simple light changes, was both the inside and outside of a church and St. Nicholas Catholic School.

Opening music transported us into the church where Father Flynn gave us a beautifully paced parable about doubt. Charlie Ralph portrayed a very gentle, confident, charismatic Father Brendan Flynn but he also brought flashes of mischief, occasional highly suppressed anger and just enough hints of ‘something’ percolating underneath the character. His was a beautifully judged performance throughout.

Which can also be said for Chrissie Derrington (Sister Aloysius Beauvier) and Marie Bushell (Sister James). The chemistry of the pair was superb. Sister Aloysius a harsh, no-nonsense school principal who is there to do a job; one of which is to protect her children. She has no doubt of her abilities or her method. Her ‘project’, the young enthusiastic naive teacher nun, Sister James, will be moulded to her image. The relationship and tension between the two is palpable. They were simply brilliant!

It’s a hard play to review without giving too much away. It’s a very complex play dealing as it does with one person’s effectivley baseless accusation of child abuse against the priest. The effect of these accusations on an innocent(?) man; the undermining of trust and hope in the younger teacher. It all sounds terribly bleak and yet it is written and directed with such a gentle touch that it is also lightly amusing and very touching at times.

This play has a currency that sadly still resonates today. Who was the victim and who the villain? It had me thinking all the way home.

The only shame about the whole evening was a small theatre only one third full.

Come on people, turn off the telly, get off the sofa and go to Bournemouth Little Theatre to see what real theatre is about. If we don’t use it, we’ll lose it and we will all be poorer for that!