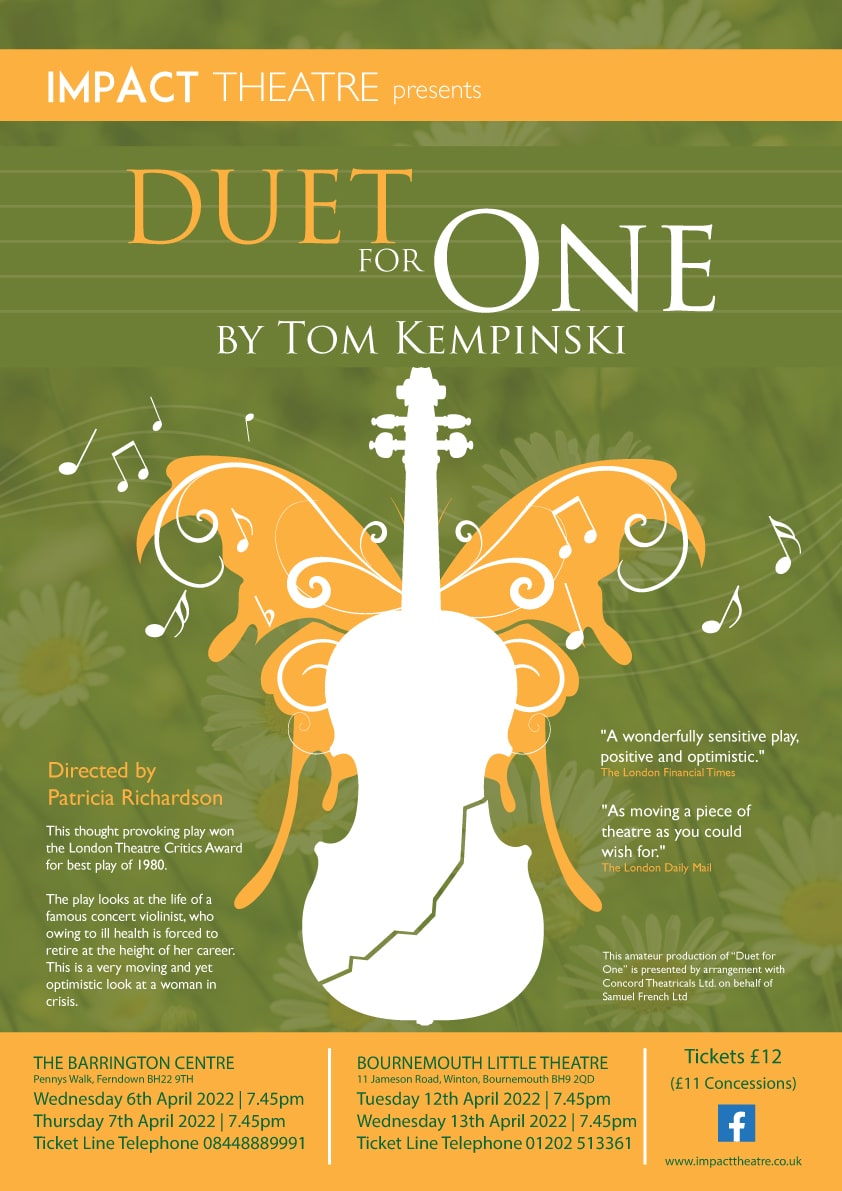 With over 100 years of history, based in an intimate 96 seat auditorium in Winton, the Bournemouth Little Theatre continues to impress with the presentation of high calibre productions, as exemplified by its latest offering of Tom Kempinski’s celebrated Duet For One presented by ImpAct Theatre. This immensely poignant play was first staged in 1980 when it won the London Theatre Critics Award for best play. Since then, it has featured a number of stars of stage, including Frances De La Tour and Juliet Stevenson, and Julie Andrews with Alan Bates in a film version.

Duet For One was inspired by the life of celebrated cellist Jacqueline De Pré, who suffered from Multiple Sclerosis – which curtailed her playing career and was a significant factor in her premature death at the age of 42. The play is about a famous, successful classical violinist, Stephanie Abrahams, who also suffers from MS, and her relationship with Therapist, Dr Albert Feldmann, who endeavours to help her come to terms with her condition and its impact on her psychological wellbeing, her purpose in life and her marriage.

Abrahams, superbly played by Rosie Hodgkinson, is confined to a wheelchair – apart from a few moments when she attempts to stand and walk in defiance of her debilitating condition.  She is a strong character and, on the surface, appears to be determined to carry on as much as possible with her life just as it was before her illness took hold and as she further deteriorates. She has only agreed to see, music aficionado, Dr Feldmann to keep her husband happy. However, over six therapy sessions we see her transition from being upbeat and antagonistic, as she challenges and puts down Dr Feldman, to being despairing and perhaps suicidal as she loses any sense of purpose to her existence. She even admits to having a seedy extra marital affair with a Totter, (a door-to-door scrap metal trader), to get back at her husband.

Fortunately for Abrahams, Dr Feldmann, played by Matthew Ellison, also putting in a superb performance, is there to unmask her and help guide her through to self-redemption and a meaningful life, despite her affliction.

There is a palpable intensity to the play which doesn’t let up at any time. It is a serious and moving drama about a sombre subject, yet there are many moments of humour, and ultimately a sense of optimism and positivity is delivered with compassion by two accomplished actors.

The dialogue is key as the two protagonists play out their respective parts, and both actors deal with the challenging script with impressive proficiency. Director Patricia Richardson has created a first-rate production.

The play is staged in a classy old-fashioned Doctor’s consulting room, which in combination with a Bach solo violin sonata and a cadenza from a Beethoven violin concerto playing in interludes between the action, forms the perfect setting and atmosphere. The Stage Manager and lighting and sound crew have demonstrated great skill in putting this together so effectively.

ImpAct Theatre is a local group of drama enthusiasts who undertake theatrical productions of a challenging nature, or which represent work of a special artistic or dramatic merit. That is exactly what Duet For One is, and this particular production is a great success.