Stephanie, a highly accomplished violinist, has been passionate about music since a very early age. When she is diagnosed with the debilitating condition of multiple sclerosis, she faces an uncertain future as her ability to play at the highest level, or indeed any level at all, is cruelly ripped away from her. Through a series of interviews with her psychiatrist, we gain an insight into her childhood, her seemingly golden marriage to another skilled musician and her all-embracing aspiration – to create music.

This two-hander depicts throughout the six therapeutic sessions the various stages of grief. Here it is because of Stephanie’s understandable response to her life-altering diagnosis rather than because of the death of an individual, but it is a grieving process nonetheless. You might therefore think that this play would be morose and depressing, but it is far from that. It is full of wit and dry humour, mixed with cynicism, sarcasm, fury, frustration, drive, fortitude and anticipation. 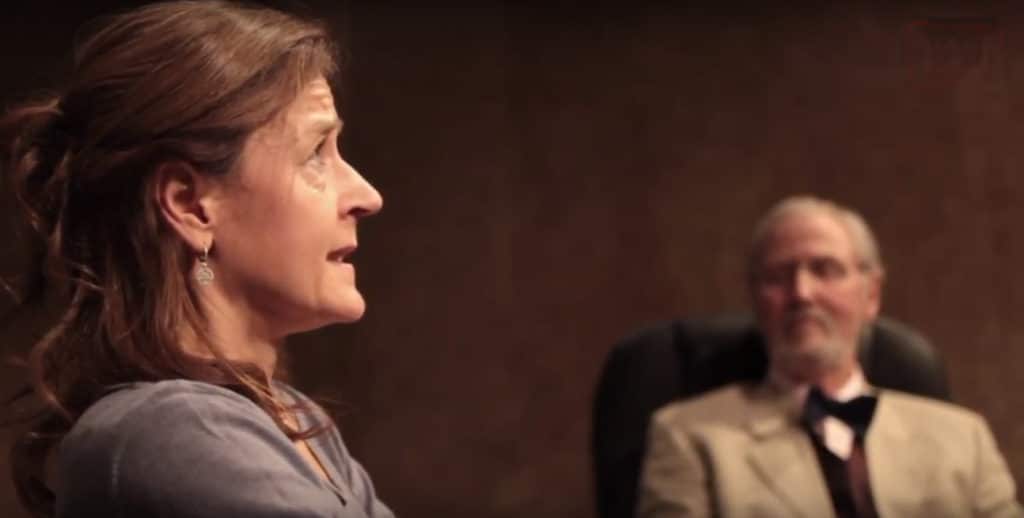 Katy Watkins (Stephanie) runs the gamut of all these emotions and more with aplomb; her physicality is impressively natural as she struggles to mobilise from her wheelchair, determined to be independent despite her body’s vulnerability. David Baldwin’s more measured performance as the kindly, calm and focused German psychiatrist, Dr Feldmann, is equally as impressive; his gentle, slightly stilted, clipped accent is mesmerising and soothing in equal measure, making his one passionate outburst all the more emphatic and striking when it does occur.

The contrast between the two – Watkins’s fiery and emotive personality, visually portrayed by her animation while in the chair, and Baldwin’s composed, professional conduct with his serene, precise demeanour and debonair appearance – is captured by the very credible connection between the two actors and their respective characters. They are compelling and draw you into their conversations and interactions; some of the audience members on opening night were literally sitting forwards on the edge of their seats, seemingly entirely captivated by what was occurring on stage.

The production elements complement the performances. As has a become a trademark of Chesil Theatre, the sound effects are perfectly pitched and positioned, the lighting is simple but totally appropriate, the scenery is well constructed (lovely touch, with garden seen through the window), and there is fine attention to detail in the props; the touching photographic stills and haunting violin solos to cover the scene and costume changes are a thoughtful addition that keeps the play moving beautifully. The costumes perfectly reflect Stephanie’s mood for each session.

The intimate venue of Chesil Theatre is ideal for this type of poignant, conversational and moving play. It would be easy for it to be a boring, stagnant, depressing production, but under the proficient direction of director Flavia Bateson and in the first-class performances of her cast duo, that is far from the case. Subtle and purposeful movements bring life to what could otherwise be a very static production and the pace and dynamics are excellent, reflecting the different stages of Stephanie’s emotions, including intentionally awkward, well-timed pauses. This may not be a light-hearted piece of entertainment, but it is a captivatingly poignant production of a very high standard and is a recommended production.