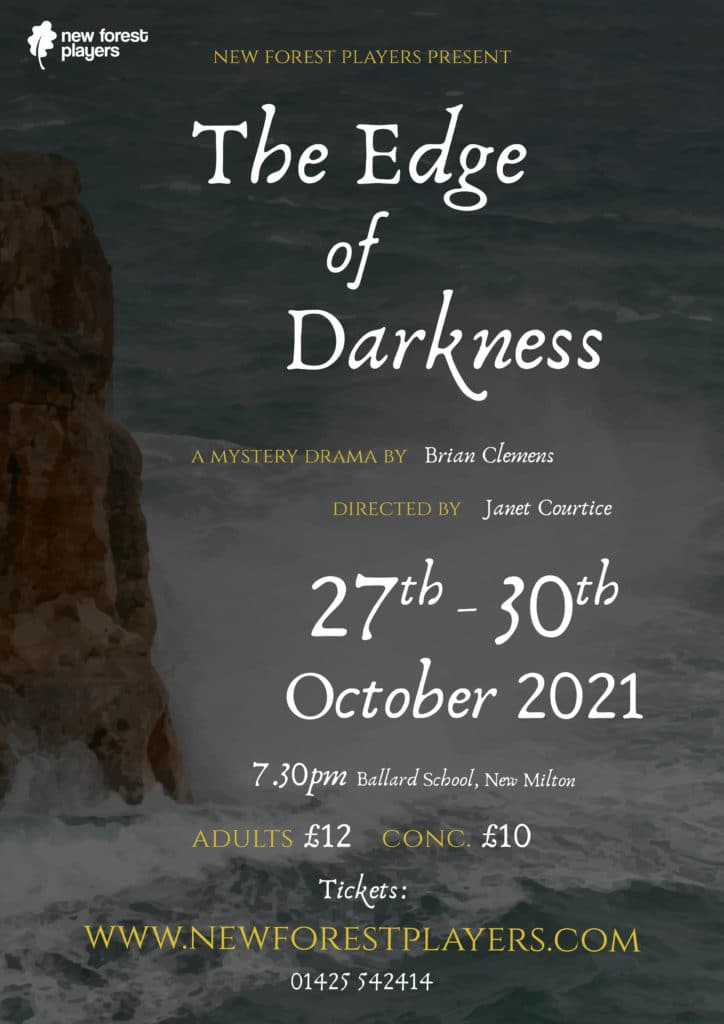 It is always a pleasure to visit Ballard School in New Milton where New Forest Players perform their plays. The facilities are excellent and there is always a warm, friendly welcome. The large acting area was well suited to this period piece, allowing the depiction of a spacious Edwardian country house. The company are to be congratulated for the excellent set, props, furniture, set dressing and costumes which was meticulous in recreating an elegant drawing room of around 1910. It felt like we might be watching a BBC Sunday night costume drama.

The play is perhaps best described as a psychological thriller, as the plot includes various twists and turns. It was written in 1978 by Brian Clemens, who is perhaps better known for TV dramas such as The Avengers and The Professionals. Clemens has taken a rather formulaic plot – a remote country house, a mysterious stranger arriving at the door, and some stereotyped characters – the maid who is a bit dim and can’t pronounce souffle – and succeeded in crafting a play with a genuinely surprising ending.

The plot revolves around Emma (Kira Collard) who returns home with her parents Max (David Luker) and Laura (Mikaela Pickett) after she has spent three years in a clinic in Ireland suffering with amnesia. There are questions around why she is familiar with some Russian phrases, why she reacts in horror to knives and is clearly disturbed by the portrait on the wall. The suspense is maintained until the final reveal as we ask ourselves the key question – is she really Emma Cranwell?

Kira Collard delivered a convincing performance as the pivotal character Emma, handling the different emotions well. At times she appeared confused, in other passages distraught but was also believable when showing childlike delight as she opened her birthday presents. Strong support was provided by David Luker playing Max. He conveyed a truly likeable character who appeared kind and loving. This was essential if the plot was to work and it did, as the final twist was not something that the audience predicted at all. Mikaela Pickett as Laura was persuasive in the tender interactions with her ‘daughter’ but seemed less comfortable when playing the highly charged scenes toward the end of the play.

Michael Deacon gave a very natural performance as Hardy the manservant. His lines really ‘came off the page’ while he maintained a balance between mystery and ordinariness. He had some light-hearted interactions with the maid Penny (Claire Collins) which brought humour to the piece. Claire had a large part with numerous entrances and handling of props required, all of which she accomplished well. A little more light and shade in her delivery, especially the conspiratorial scenes with Hardy, would have added to her performance. Ieuan Luker as Livago made a brief appearance, bringing new energy to the play at the start of Act 3. He conveyed the caddish character well, and his stage fall was spectacular!

The atmosphere of intrigue and mystery was well maintained through the lighting and sound and again, attention to detail was evident here. However, there was a slight problem with the lighting down stage centre as the actors weren’t fully lit.

The director Janet Courtice successfully moved her cast around the stage in what seemed a spontaneous way, but I wasn’t sure about her choice of breaking the fourth wall, as it tended to reduce the tension and was a reminder that we were watching people on stage. She obviously has a very good team around her and achieved a convincing period piece which the audience really enjoyed. Well done, New Forest Players!