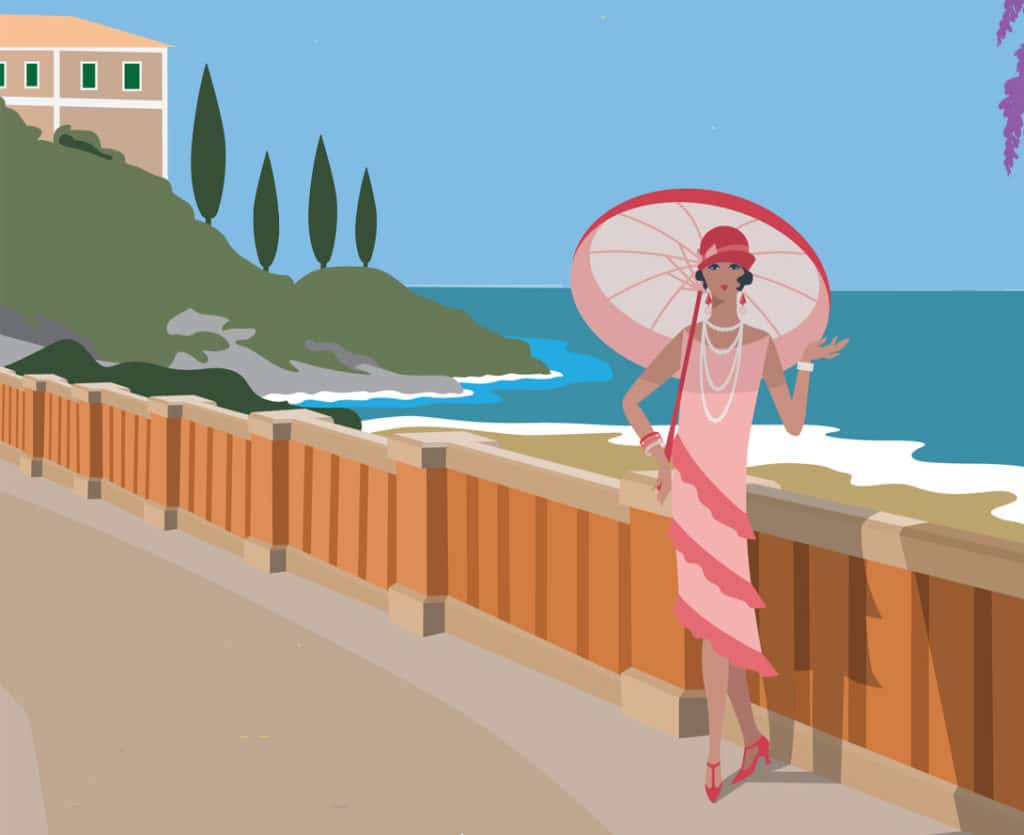 With most of us having been in serious danger of developing webbed feet over the past few weeks, this delightful play about two ladies deciding to rent an Italian villa to escape the London rain (and their husbands!) seemed particularly appropriate for the Players’ Spring production, which is beautifully directed by Wendy Beaumont.

The challenge for the company was to find a way of staging the numerous scenes – nine in act 1 alone – without huge pauses for set changes, and this they achieved admirably thanks to quick addition or removal of basic props and lighting effects focusing on specific areas of the stage. Ironically, the very few over-long pauses came during act 2, when the setting remained the same; they were caused, I suspect, by costume changes.

Talking of costumes, I must give a big gold star for those responsible for sourcing such perfect ones: they are redolent of the 1920s period and the evening dresses, in particular, are absolutely gorgeous. Full marks, too, for such attention to detail regarding hairstyles and props, and for such lovely pot plants in act 2. Oh, and those rain sound effects were all too realistic for my liking, so I was very relieved to find it was actually dry outside when we left the theatre – it must have been the effect of that Italian sunshine.

The story centres around Charlotte Wilton, a Hampstead solicitor’s wife who is rather unhappy with her lot and who sees an advertisement in The Times offering an Italian villa to rent for the month of April. Somehow she is able to persuade an equally unhappy lady with whom she is barely acquainted, Rose Arnott, to accompany her and they advertise for two others to join them and share the cost. The beautiful weather and surroundings begin to work their magic on everyone, and all sorry hearts begin to heal.

Christina Derrington is excellently cast as the persuasive, almost child-like Charlotte; thanks to her expert timing, many of the humorous lines that might have been lost in less capable hands are laugh-out-loud funny, and she also has the gift of making her character seem completely believable. Tina Fagan is also just right as Rose, beautifully fitting the description of a sad Madonna and giving a really touching performance.

Sally-Anne McKenzie, according to the programme notes, has had some drama and improvisation training but this is her first performance in a play. I hope it won’t be her last as she gives a most impressive performance as Lady Caroline Bramble, not to mention having what sounded to my ears like a pretty good grasp of Italian. Kim Walker plays Mrs Graves, an irascible elderly woman who in many ways has the biggest change of personality over the course of the play, and although she seemed slightly hesitant at first, soon relaxed well into the character.

There is rather less for the men to do in this play, but Alan Whitty certainly impresses as Charlotte’s husband, Mellersh, not least for being brave enough to come on stage wearing nothing but a towel around his waist. Geoff Phillips is a newcomer to acting but he rose to the challenge of playing Rose’s husband, Frederick, visibly growing in confidence as the evening went on. John Donnelly also gives a lovely characterisation as villa owner Antony Wilding.

Last, but by absolutely no means least, is Barbara Evans’s wonderful portrayal of housekeeper Constanza. Her facial expressions, gestures and brilliant way of spitting out her feelings with her words simply brought the house down.

This well-received production continues on 12-14 April at 7.30pm.