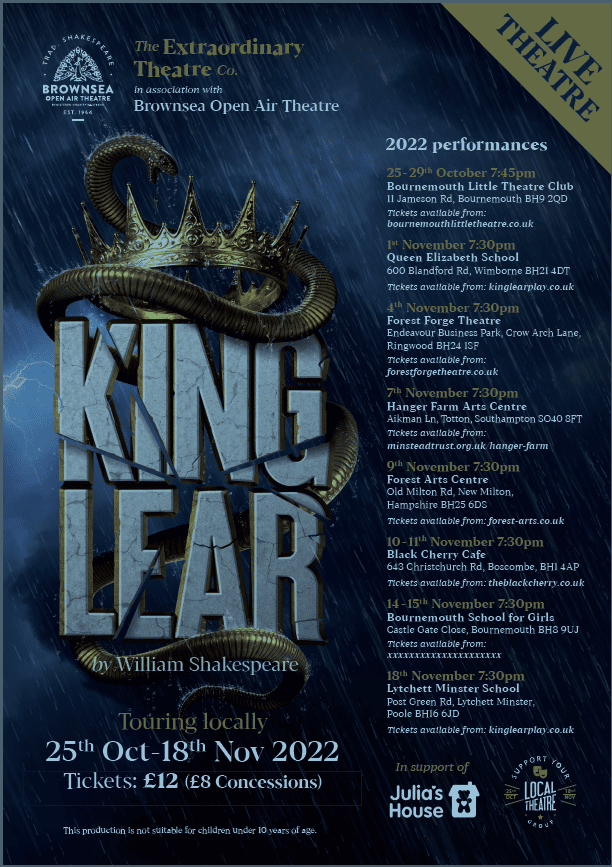 The newly formed Extraordinary Theatre Company is joining forces with Brownsea Open Air Theatre (BOAT), with its 57 years of producing Shakespeare plays on Brownsea Island, to take their production of Shakespeare’s King Lear on a tour of local venues.

Opening on 25 October at the Bournemouth Little Theatre, they will then visit another seven venues before completing their tour on 18 November.

The Company is particularly focused on getting the message across to young people that Shakespeare is accessible, relevant and rewarding.

They will be performing at three leading local schools, where they will also be running specially designed ‘From Page To Stage’ workshops for Drama and English students, giving them insights into the challenges that come with directing and acting in one of Shakespeare’s greatest tragedies.

Being also determined to contribute to the local community, Extraordinary Theatre Company and BOAT will be donating 50% of the profits from King Lear to Julia’s House, Dorset and Wiltshire’s children’s hospice that provides practical and emotional support for families caring for a child with a life-limiting or life-threatening condition.