If you want a change from the magic carpet and transforming pumpkin of traditional Pantoland this Christmas, you could do a lot worse than this brand new adaptation of one of Roald Dahl’s best stories by Sam Holcroft, with music by Arthur Darvill.

It opens traditionally enough, with four birds singing sweetly in close harmony. What happens next tells you that this is something a bit different, and then we are into the story of Mr Fox and his friends and their attempts to outwit the three farmers: irascible Bean, greedy Boggis and thick Bunce. The birds, by the way, become the onstage band, but re-appear at the start of act 2 with one of the catchiest numbers in the show.

Mr Fox starts as an arrogant swashbuckler: a cross between Robin Hood and Rik Mayall’s Flashheart in Blackadder. Robbed of some of his powers and much of his confidence by the loss of his tail, he becomes more appreciative of his friends and their individual talents, understands the importance of teamwork and becomes a much nicer person all round. Greg Barnett conveys this character development most convincingly and has the voice, looks and movement to be the centre round which the whole show revolves. (In more ways than one, since the show is played on a set which is given huge flexibility by one revolve on top of another: not only ingenious but very effective.) 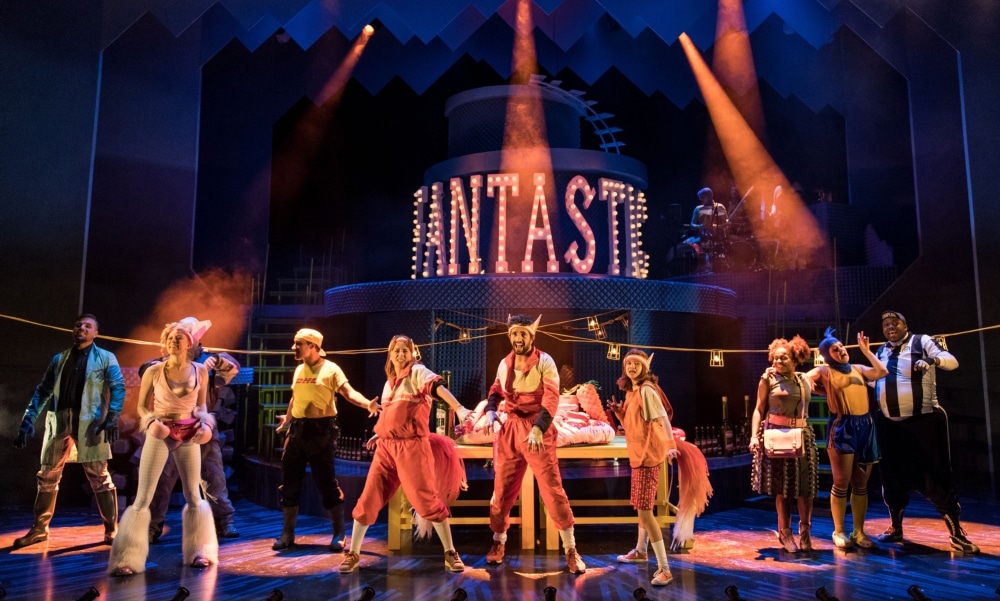 Despite a dominant central figure, the play demands – and gets – strong and energetic ensemble playing. The three farmers also play three of Mr Fox’s friends, involving some lightning-quick costume changes. Richard Atwill is suitably dislikeable as Bean and his other character, Rat, is not much better, but he makes a convincing drunk and has the number that will surely have most appeal to children: ‘Do whatever you want’. Gruffudd Glyn makes Mole very likeable and is not far off achieving the same for Bunce. To play Badger, the realistic, brainy one among the animals (a nod to Wind in the Willows), Raphael Bushay can do gravitas, but Boggis gives him a chance to show his comedic talent.

Mrs Fox knows Mr Fox inside out and is his saviour in more ways than one. She is sensible, but spunky and up for adventure and shows only a little of her resentment at being left at home amid the domestic chores. She’s a lovely character and Lillie Flynn plays her beautifully. Jade Croot, as their daughter, looks so young that at first I assumed that she was a drama student. She was too good for that, though, and only in the interval did I learn from the programme that she already has a distinguished cv, including Helen of Troy in Doctor Faustus for the RSC.

Of the other animals, Sandy Foster is an intensely irritating Rabbit – a compliment, since with her tactlessness and her excitability, she is meant to be irritating – while Kelly Jackson makes the most of the slightly colourless Mouse.

There is always a buzz about seeing a new play. Maybe act 1 needs a bit of attention: the semi-slapstick scene in the chicken house somehow doesn’t work. However, the act has a terrific closing number and from there the show soars, with a really strong act 2.

Unless you are a member of the NFU, in which case you will probably disagree with the basic premise that farmers are beastly and foxes are wonderful, this show is highly recommended. It is at the Nuffield until 8 January; for times, see http://www.nuffieldtheatre.co.uk/whats-on/fantastic-mr-fox. It then goes on tour until July, starting at the Lyric, Hammersmith, and going to Cardiff, Edinburgh and Oxford among others.