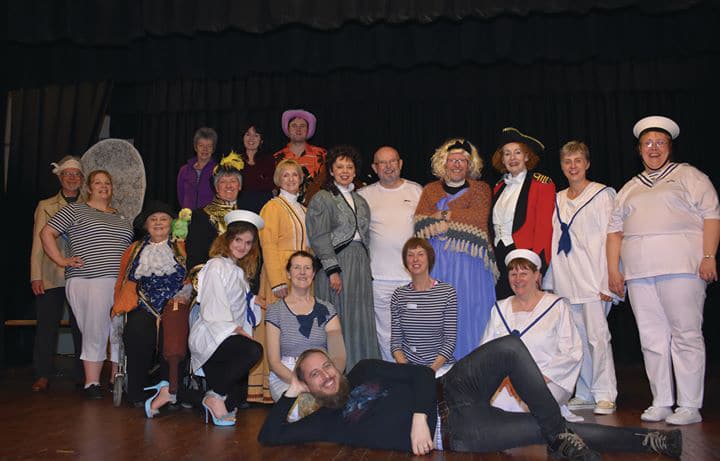 Having escaped from this totally bonkers evening almost completely unscathed, and having even won a raffle prize – I shall treasure that tin of pilchards – I have arrived home to discover in the programme (the programme within a programme, that is) that it had been erroneously reported that I was ‘missing in Acton’. How such a false rumour came about I cannot fathom, as I have never been to Acton in my life – but it just shows the lengths to which some reviewers will go in their efforts to see off rivals. I must say, though, that I am mightily impressed that anyone remembers Linda Dingle-Dangle’s name after all these years. For those of you who are now thinking that I must have lost the plot, perhaps I should explain that I did indeed have that nickname when I was young and charming – just like Little Buttercup – as it was a kind of variation of my maiden name.

However, despite all the above it is very possible that I probably have lost the plot after all, and will see out my days rambling about productions of HMS Pinafore where the Boatswain gives birth on stage, the Captain becomes the Pirate King, Ralph Rackstraw has an affair with Hebe, Sir Joseph never quite knows which wounded arm should be tucked inside his jacket and everyone at one point begins to act out Michael Jackson’s Thriller.

By now I’m sure you’ve got the picture – this is far from being an ordinary production of HMS Pinafore but has been written and directed by Penny Crichton-Seager in the vein of the much-loved Farndale Avenue farces. Penny is steeped in G&S and has skilfully woven in bits of The Pirates of Penzance and The Gondoliers to the production being put on by the mainly female members of G.O.N.A.D.S. – Great Orpington & Netley Amateur Dramatic Society.

I was highly entertained and spent much of my evening laughing out loud, but I too am steeped in G&S and I suspect that some of the things I laughed at – for instance, the reference to Sir Joseph Porter as JCB rather than the correct title, KCB – would have gone over the heads of many of the audience. However, there is much visual humour too, and the freeze and fast forward when one of the crew doesn’t want to miss anything during his toilet break works a treat, as does the use of phone lights to illuminate the stage during a ‘power cut’.

Cast-wise it is a cracker, with some great performances – not least Janet West (Captain Corcoran) and John West (Little Buttercup, aka the Vicar), Naomi McQuin (Boatswain), Cherrill Ashford (Josephine), Brian Oliver (Ralph Rackstraw), Gill Linford (Sir Joseph Porter), June Buxton (Dick Deadeye), Wendy Costigan (Hebe) and Andy Bond (Joseph McGillyCuddy). One of the evening’s most memorable performances, though, comes from Val Rossiter, her character forced on stage due to Josephine’s drunkenness to mime to ‘The hours creep on apace’. If only the recording wouldn’t keep sticking or playing very fast or very slow…. It is a joy, and so very well performed by Val that it brings the house down.

There are lovely cameos from the ladies of the chorus, too, and a tuneful small orchestra led by musical director Jean Holt.

Further performances on Friday 20th and Saturday 21st at 7.30.