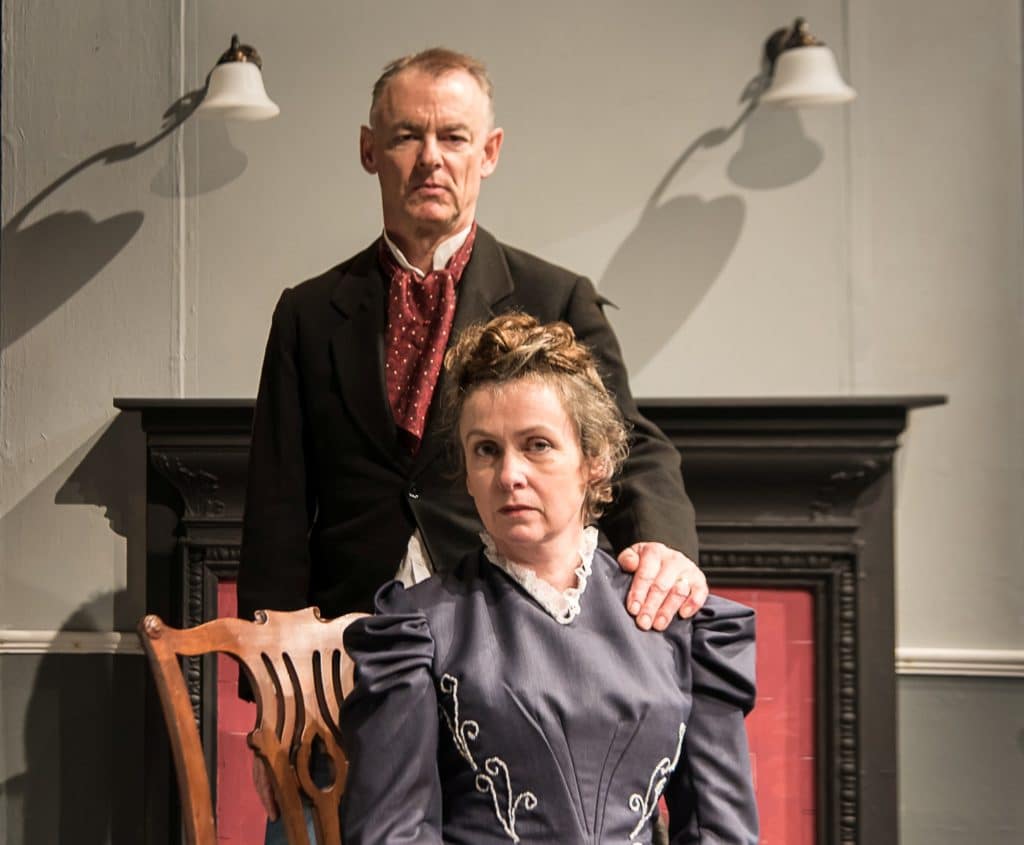 The play is far more claustrophobic than either of the filmed versions and director Michael Goron exploits every inch of stage and lighting technique to ratchet up the tension between his performers.

Steve Clark is quite beautifully monstrous as Jack Manningham, his very poise and ‘low’ voice showing from the onset his power over his new wife, Bella. At times I wanted literally to hiss my disapproval at his control and depth of sleaziness and vitriol. You could hear a pin drop at times, such was the audience concentration, and the odd concerned mutter that ‘he’ was about to or could return, such was the atmosphere produced.

Helen Grime as Bella more than matches him: her need to please him and the turn from happiness to despair as his next ‘trick’ unfurls is quite distressing, such is her acting craft. Indeed, thanks to her strident acting and composure and the clever direction, there was a point during the denouement when I wondered if I had correctly remembered the ending. No hysterics, just pure understanding of the script, which has very good diction from all concerned throughout.

Scarlett Briant is a sunny yet opportunist Nancy; when she realises that she could be the mistress of the house, almost a cat-like smile of satisfaction pervades her. Her triumphant slamming of the doors as she leaves, adding more distress to Bella, is also a nice touch.

Bringing some much-needed humour to the proceedings with comic timing of complete brilliance is Richard Martin as Inspector Rough. Played with a deft touch and command of the stage, you are never quite sure whether he is friend or foe. Again, leaving the hat removal until the last minute keeps the audience guessing, the playful relationship with Bella as she realises the truth being particularly warm and affectionate.

Rachel O’Neill is a well-observed and comforting Elizabeth. Her dialogue with her employer is markedly different to that of the more scheming Nancy. I inwardly cheered as she out-foxed him, her moral concern and yet self-interest being well defined and shown.

The set has to be clever, involving as it does much action in a very small space, but also having to show the closed-in prison of Bella’s world. Locked and unlocked furniture, pictures removed and replaced (showing the shadow where it should have been), but allowing flow for movement around these objects, is very well thought about, adding flair and pace to the action. The lighting is just sublime: being a plot device, it has to be good and in the hands of Tony Lawther is delicate yet strong, adding much to the tension – indeed, creating the tension at times. The opening act shots of the faces of protagonists, then slowly fading into reality, is sharp and atmospheric.

Not for a very long time have I been in a theatre where audience concentration has been so strong. Cast, crew, props, director and all concerned are to be thoroughly congratulated on this excellent piece of theatre. Future performances are on 3 to 7 April at 7.45 and on 8 April at  2.30 and 7.45, and I strongly recommend that you catch one of them.