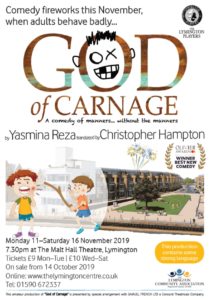 On the face of it, the crux of Yasmina Reza’s barbed four-hander is a straightforward one: two sets of parents get together to have a (hopefully) civilised discussion following the attack, with a stick, by the son of one of the sets of parents on the son of the other, leaving him with cuts and bruises and a couple of missing teeth.

But the script is torn up fairly quickly as each set of parents tries, after a fashion, to defend their own son’s actions, and the barriers come tumbling down, with the couples almost seeming to agree one moment and then descending once again into bitter argument, not just with the other parents but also between each couple. Add to this the furtive disposal of an unwanted hamster, an inedible cake, a perpetually ringing mobile and the rapid downing of a whole bottle of rum by all present, and the scene is set for some home truths to spill out mixed in with some very funny one-liners.

As Michael and Veronica, the parents of the injured boy and the hosts of the evening’s get-together, Sean Deegan and Rachel MacKay worked well together, he being in the hardware trade and trying to see both sides of the argument, she being an author with a social conscience and a new book on the crisis in Darfur and fiercely defensive of her injured son, and it is she who initially tries to effect a conciliatory resolution to the situation.

The other couple are Neil Brookes as Alan Rule, a high-flying corporate lawyer, whose ‘phone never stops ringing as his firm represents a pharmaceutical company on the verge of being taken to court over problems with one of its latest products, and his wife Annette (Kim Walker). She would like an amicable resolution to the situation, but when this becomes increasingly unlikely, she it is who gets drunk (and throws up all over the coffee table), smashes a vase, and drops her husband’s phone into a vase of tulips. Neil filled out the part well, with the best of the one-liners falling to him. The line to his vomiting wife “Well, puking certainly seems to have perked you up” was a stand-out.

Overall, debut director Ed Funnell’s  production worked well, though perhaps the occasional Pinteresque pause would have heightened the tension, but the ebb and flow of the arguments from both sides always held the interest. Designer Mark Ralston’s modern copper-effect set established just the right tone and gave the actors the room to move freely. My only issue was with having a momentum-breaking interval after just thirty minutes when the whole piece could have run non-stop in less than ninety.