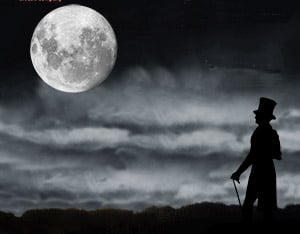 Despite his lack of formal education, Charles Dickens is one of our most celebrated authors, so it is unsurprising that his works are often chosen to adapt for the stage and screen. Some of the adaptations have been sensational, others quickly forgotten. Director Sarah Russel chose very carefully in using the Gale Childs Daly version of this particular classic.

When it comes to creating memorable fictional characters, Dickens is one of the masters, and this production contains a whole host of them. The programme notes claim there are 30 characters in the show – although it felt like more – but they are played capitally by just six performers. Having a small cast but a large number of characters can often pose a massive challenge for a director, but in this case, Sarah has done a good job and has brought some beautiful creative and concrete touches to the story.

Great Expectations depicts the personal growth and development of an orphan nicknamed Pip. The show opens in a graveyard, with the seven-year-old Pip being threatened by Magwitch the convict. The frightened boy obeys the escaped prisoner’s demands, without knowing the positive consequences it will have. As Pip grows up, he encounters the deserted bride, Miss Haversham, falls in love with her ward, Estelle, and is spirited away to London where he enjoys the life of a gentleman before Magwitch re-appears to shake Pip’s life one more time.

Staged in the Maskers Studio, the play is very intimate, which works well since the script is mostly narrated by the various characters. On the other hand, this is at times difficult to follow as the narration bounces from character to character. Also, Great Expectations is one of only two of Dickens’s novels to be written in the first person, but this version has removed that quality, delivering much of the text in the third person.

The central character, Pip, is played expertly by James Fairley. It is not always easy to portray the gradual ageing of a character, particular when starting at the tender age of seven, but James does so brilliantly. The remaining five actors are then challenged with seamlessly morphing in and out of the various characters and to keep the action flowing. Matt Avery delivers some brilliant characterisations, from the dark and mysterious Magwitch, through the pompous Pumblechook, to the sly but competent lawyer, Jaggers. Calum Daly brings lovely comedic qualities to his roles of Herbert Pocket and Mr Wopsle. Jo Barnard’s portrayal of both the begrudging sister, Mrs Joe, and the cold-hearted Miss Haversham are both powerful and poignant. Sarah-Jayne Wareham’s characters are wide-ranging but all beautifully convincing, from the spoilt Estelle to the shady and menacing Compeyson and the plain and cheerful Biddy. Finally, Eric Petterson gives delightful depictions of the happy but simple Joe Gargery, the calm and composed Mr Wemmick and the snobby Bentley Drummle.

Emma James’s set design is well used, and most of the costumes are hung around the scenery to aid the actors with their quick changes. On the whole, those costumes are excellent, given that the piece is set in the early 19th century, but with so many different parts being played, at times it was a little confusing to tell if an actor was in the right costume at the right time! Clive Weeks’s lighting design beautifully complements both set and action, greatly enhancing the necessary changes in atmosphere of the play. It was good to see the actors also re-creating some of the audible effects to the action, rather than simply having pre-recorded sound.

All in all, a very good adaptation of this classic, which can be seen at the Maskers Studio until Saturday 1 April, and then at the larger but less intimate Berry Theatre from 4 to 8 April at 7.30 each day.