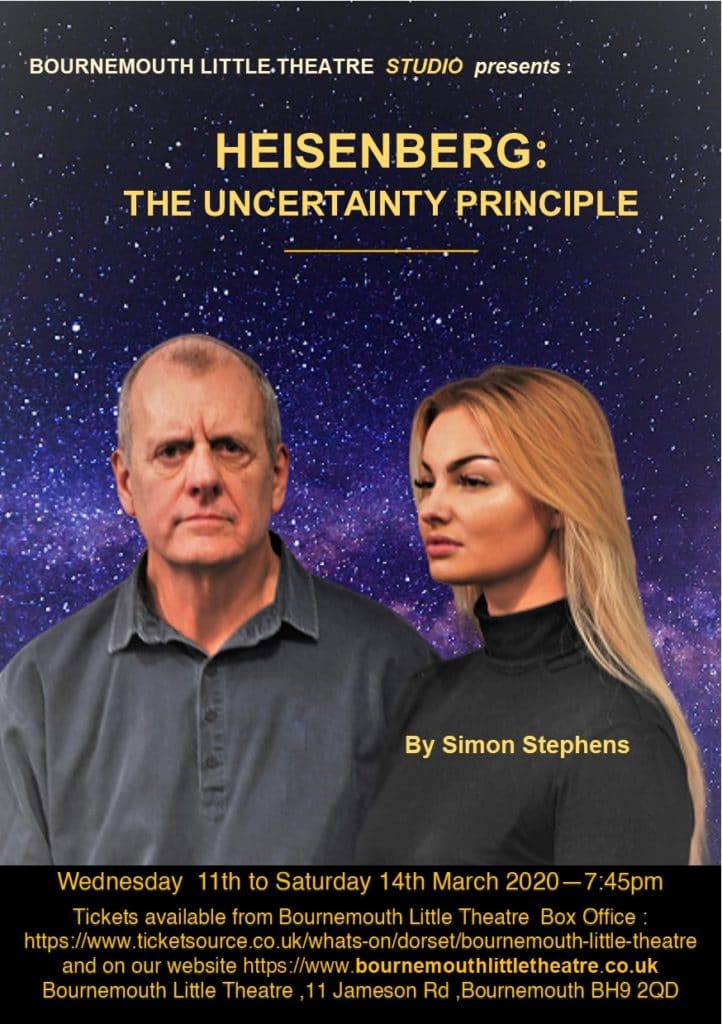 This is a play that tries too hard. Its very title has a smack of pretension about it: for those who are not quantum physicists, Heisenberg’s principle is basically that you cannot measure the position and the momentum of a particle simultaneously. The play has been rightly criticised for its “self-conscious intellectualism”, offering as it does a series of epigrams which sound profound but are mostly either trite or meaningless – e.g. “People think too much about who they are; we should worry more about what we do” – plus the obligatory sprinkling of barely relevant four-letter words. Ironically, underneath the waffle is a simple boy-meets-girl story. Actually, it is not so much ‘boy-meets-girl’ as ‘middle-aged-woman-meets-elderly-man’, but theirs is still a touching and rather sweet love story. And in this production, the two-hander’s shortcomings are masked by two exceptionally good performances.

Georgie Burns is bouncy, unconventional and voluble; her unpredictable behaviour has more than a touch of the manic about it. Alice Drewett plays her with immense energy, but as the play explores the character more deeply and it emerges that she can be awkward and vulnerable, desperately searching not only for her estranged son but for something not even she can identify, the performance enters another dimension and is truly involving and moving.

What is a conventional 70-year-old going to make of this American bundle of emotions? Alex Priest is at first bemused, but then enchanted as only someone can be who is surprised that a younger woman finds him attractive. Alex is sincere and straightforward but horribly repressed, and one reason he falls for Georgie is that she gives him a chance to find things out about himself that he barely suspected were there. Tim Fearon gives a masterly performance; he knows the value of stillness and of economical movement, but the way he loosens up, in every sense, as the character develops is superb.

Even so, the whole is greater than the parts, and it is a joy to see two experienced, talented actors working together to deliver the dialogue crisply but also to convey the connection on a deeper level. The contrast in their body language is striking, they know the power of silence and they both maintain their accents – American and Irish – impeccably. They are also credited as the directors, and the extent to which they have invested themselves in the production is evident. I would love to see them acting together again, but in a piece more worthy of their talents. Heisenberg: The Uncertainty Principle plays each night at 7.45pm until Saturday 14 March.