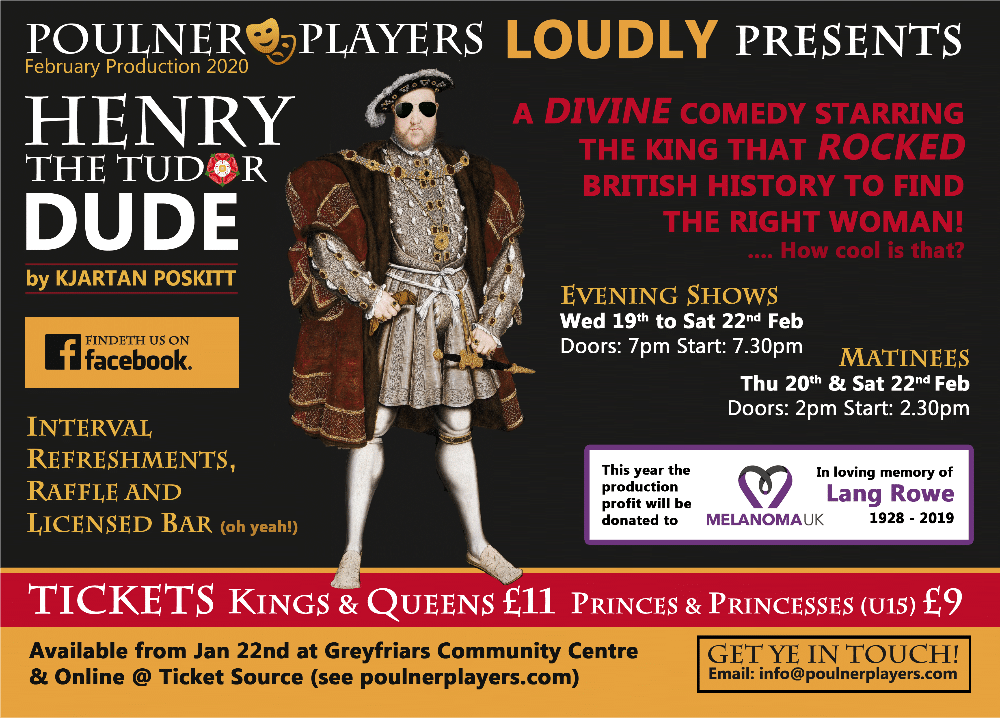 I’ve been looking forward to this play for a while; I always love watching different material being delivered by talented local theatre enthusiasts. This play boasts a) being different and b) talent; furthermore, I was surprised to find out it was also a musical! Co-Directors Harriet Cairnes and Julie Sturmey must be brimming with pride with this most recent production.

The play was written by Kjartan Poskit and it was originally created for a large am-dram group. Over 300 hundred performances later, the play has landed in Poulner Players’ very capable hands. If you don’t know who Henry VIII is, you can’t have been very interested in history at school! One of our most famous, or perhaps infamous, royals is brought to life on stage, with all 6 of his wives and other historical figures of the time in the very well-written, witty, hilarious musical.

It’s always a risk when theatre companies choose to break the fourth wall and have characters greeting guests. It’s a risk that pays off on this occasion as this, coupled with a very authentic looking Tudor themed stage, helped to build anticipation for the show to come. Small details such as stained-glass windows with the sun shining through add to the effect.

The set certainly deserves a mention as its simplistic design made a very smooth and effective transition between many (MANY) scene changes; it was also nice to see the stage hands donning Tudor tabards along with the usual black clothing, a further tiny detail which made a difference.

The play was held together marvelously by June Buxton as the Newsreader. This narrative role allowed the play to move throughout Henry VIII’s many years without need for long drawn out conversations and monologues from the characters to offer context, as this can be rather dull. Instead, it was very pacey, offering us insight into the more juicy, fun parts of his life.

This particular production had a huge number of roles to fill, which resulted in a number of the cast having around two or three parts to play throughout. This can only be a good thing as they were all able to showcase their versatility in different roles. Annette Darling was a fine example of this, truly seeming to come to life in her role as Catherine Parr at the end of the show.

Henry appeared to have an unhealthy interest in entrusting highly influential jobs to individuals named Thomas! Peter Ansell was well suited to the role of Thomas Wolsey, showing us a long suffering, rather bumbling leader. Steven Reynolds shone in the role of the rather slimy bad guy, Thomas Cromwell. Andrew Galloway made a good stoutly religious Thomas Moore, and Nathan East delivered a very funny performance in the role of Thomas Cranmer, who somehow managed to remain alive throughout the full performance, unlike the rest of the Toms!

In the title role of Henry VIII, Ian Rix was, in a word, outstanding. He showed the audience that he is highly capable of commanding a stage, and delivered the royal legend with charisma and excellent comic timing. He blew the audience away, very much evidenced by the rapturous applause he received in his bow!

Some of the enthusiasm shown on stage was wonderful to see; however, that enthusiasm didn’t always translate to the full cast. Perhaps it was nerves, but a small number of performers did not look like they were enjoying their time in the spotlight, and that can draw the eye somewhat.

The music is all original and there are a lot of songs, so MD Jono Spratt must have had quite a challenge. There were some brilliant songs, but the standouts were ‘The Battle of The Spurs’, ‘The Body Rock’ (all of them!) and most of all ‘Blue!’ which had the whole audience laughing out loud. Unusually for amdram, the male vocals were the most prominent, with the songs led by females losing a lot of volume, sometimes being drowned out by the live band.

All in all, this was a very enjoyable evening. If you enjoy comedy, and a little bit of history, this show is for you.