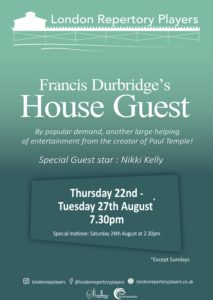 Most of the time we, at Scene One Plus, are reviewing amateur productions – sometimes they have professional help, but the actors are mostly amateurs. Sometimes it shows… and allowances are made; at other times I feel that a production is good enough to be professional; there are even times when I wonder whether the amateurs are better than the professionals.

The London Repertory Players is made up of professionals and the cast list in the programme contains a string of credits for these actors from stage and screen – some of them veterans of TV sitcoms, soaps and detective dramas.  I set my bar correspondingly higher.

I was not disappointed. These guys delivered every line with perfect audibility; they varied pitch, pace, pause and inflection with consummate skill and would have had us on the edge of our seats – were it not for the fact that the unusual (but comfortable) airline-style seating at The Shelley rather tips us back away from the edge.

I have been critical, in the past, of some of the tired and dated plots that some Societies trot out, but this one is rather good. There are more twists than it takes to solve a Rubik’s cube and there is just a faint whiff of red herring at the end of every scene. There is some violence, a bit of humour and a lot of tension. There is a large consumption of faux alcoholic beverage from the well-stocked bar that seems to feature in every set for this type of domestic drama. Tension builds throughout Act I, where I was particularly impressed with the performance of Mark Spalding, as the mysterious Major Crozier. There was much pondering as to what could possibly be afoot in Act II as we headed to the bar for the interval.

The second half continued, literally, where the first half left off and built to a satisfying conclusion. There was a point in the middle where the pace dropped and it seemed to drift a little – but it is a minor niggle. Al Wadlan, as Robert Drury, made a good demonstration of talking on the telephone to disembodied third parties, as also did Neil James, as Burford: there were at least three people in this drama who only exist at the other end of an, apparently rather faulty, ‘phone line.

Of the theatrical thrillers that I have reviewed over the last several years with Scene One Plus, this is probably the best. There was a near capacity audience tonight and I hope that they will have capacity audiences for their other performances – it runs again on Friday 23rd at 7.30pm, twice on Saturday 24th at 3.00pm and 7.30pm, and again on Monday 26th and Tuesday 27th at 7.30pm.