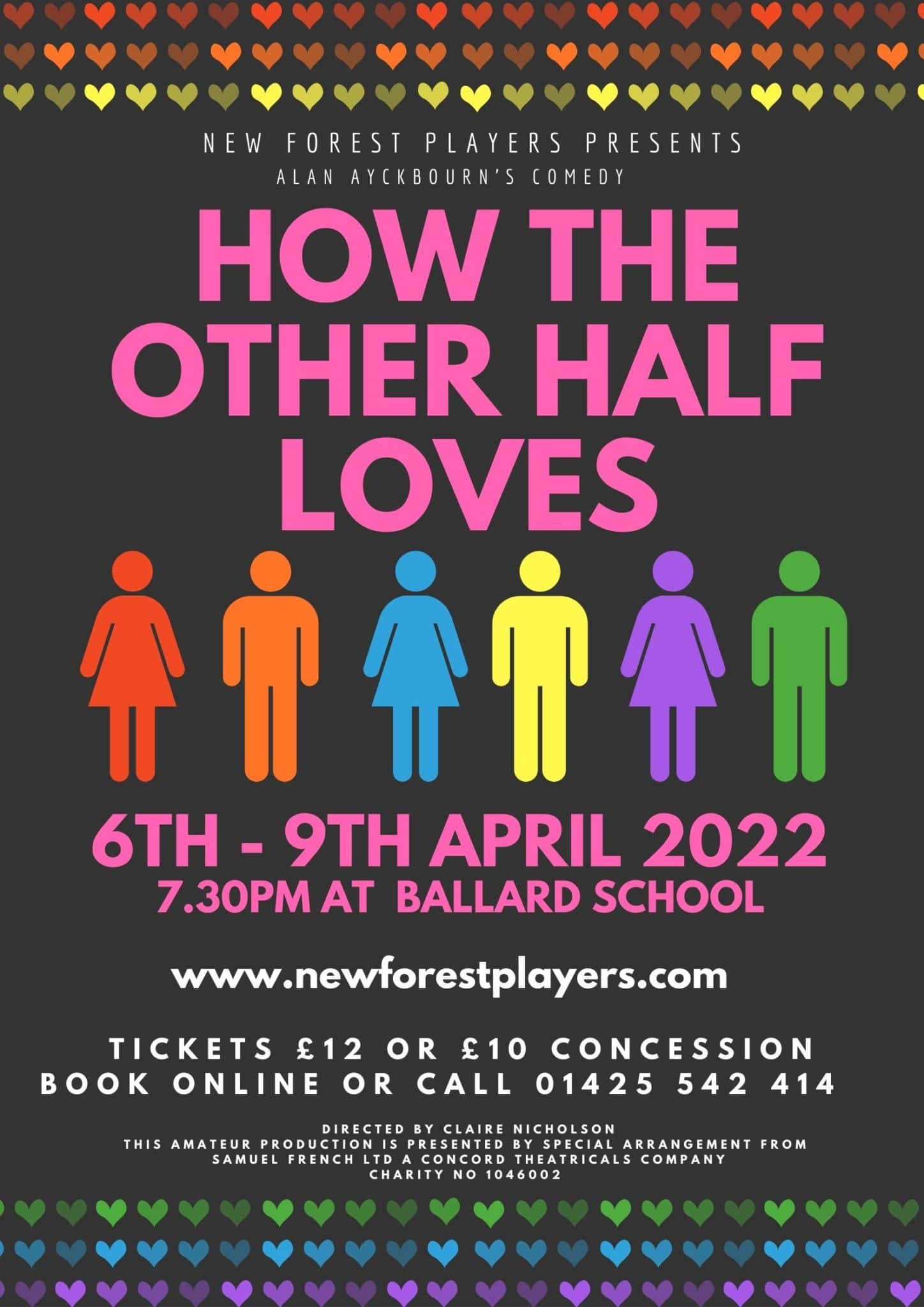 Fans of Alan Ayckbourn, if they haven’t already seen it, have a mouth-watering treat in store with How The Other Half Loves, the latest offering of the New Forest Players at The Ballard School of Performing Arts Centre, New Milton. But if you’ve never seen an Ayckbourn play before, or even if you’re new to live theatre, this production would be an excellent introduction.

How The Other Half Loves is classic farce and has been revived and performed regularly with continuing success since its debut performance back in 1969. Although superficially the storyline may feel as if it has been locked in a time capsule, the script remains relevant for today as it deals with the timeless issues of social class, marriage, gender inequality and sex. As expected of a farce, there are moments of palpable cringeworthy embarrassment and absurdity, yet this is a genuinely funny play. Without giving too much away, the narrative follows a chain of events that result from an adulterous one-night stand between vulgar Bob Phillips and the older and well to do Fiona Foster, the wife of his boss, as they both contrive to cover up their illicit liaison by implicating another couple, the unfortunate William and Mary Featherstone, as their respective alibis.

Ayckbourn is famous for employing novel devices in his plays and he doesn’t disappoint here as the centre piece for the action is a set that comprises two living rooms, with a shared dining table that allows for two dinner parties to take place over successive evenings, but cleverly acted out on stage at the same time. The NFP backroom crew have met this challenge with the creation of a spacious and realistic period setting that provides a messy living room for the Phillips family on one side and an upmarket elegant living room for the Fosters on the other side. In the middle is the table. The setting is complimented by authentic costumes and throughout the play the audience is served with background music from the era, perfectly synchronised with the action.

John Tickner plays the genial and slow thinking Frank Foster, who sees his role in life is to organise the lives of others to achieve peace and harmony. He is married to Fiona, played by Clare Collins, who is looking for some excitement to add to the trappings of her privileged existence.

Michael Deacon is Bob Phillips, who is probably the most objectionable loudmouthed, preening male chauvinist ever to appear on a stage. Victoria Sandford plays his suffering wife, Teresa, who is struggling to cope with a new baby and looking after the house, while she puts what little energy she has left into following current affairs and writing copious unpublished letters to The Guardian.

Then there are the quiet and unassuming William and Mary Featherstone, played by Alan Whitty and Sarah Habberfield, who are the dullest of people unwittingly caught up in the maelstrom of lies and deceit perpetrated by Bob and Fiona. The women, as different from each other as they may be, have certain things in common – they are unhappy and overpowered by their domineering husbands. The men on the other hand have everything they want in their lives, and Bob and William are both bullies.

A potent cocktail of characters and all played skilfully with enthusiasm and energy by a group of very good actors. The pace is fast with faultless timing in the delivery of all the funny lines from beginning to end – situation comedy at its best! Director Claire Nicholson has hit the nail on the head with this production of a great British comedy.

How The Other Half Loves runs until 9 April.