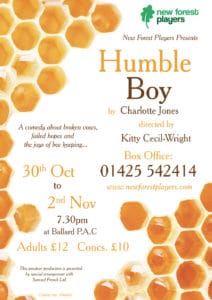 The New Forest Players continue to impress with the witty and most enjoyable play Humble Boy as the latest offering in their 2019 calendar, performed at the excellent Ballard School of Performing Arts Centre in New Milton.

Humble Boy is a well crafted play by prizewinning playwright Charlotte Jones and was first presented at the Royal National Theatre in 2001, with a stellar cast which included Simon Russell Beale and Diana Rigg. That production won The Critics Circle Theatre Award for best new play and also scooped-up two Olivier Awards. It has since been produced at a number of prestigious venues in other countries. Any play with such an eye catching pedigree is a mouth watering prospect and be assured this NFP production is definitely worth seeing.

Although essentially a comedy (fans of Tom Stoppard and Alan Ayckbourn will spot the similarities with the techniques employed in their works), it has been suggested the play draws inspiration from Shakespeare’s Hamlet through the main character, Felix Humble – an astrophysicist with a troubled mind and suicidal tendency, who has difficulty in coming to terms with the death of his father. But this is no Shakespearian tragedy; indeed, the play’s tempo is lively from start to finish with generous helpings of humour and laughs aplenty.

In the play, Felix returns to his family home on the day of his father’s funeral to find that his mother, Flora, has already cleared the house of her husband’s belongings, including the bees which he kept (bees play an important role in the story that is played out over the following days and weeks).  There is a deep seated tension and animosity between son and mother, which reaches a climax when Flora declares she intends to marry a family friend, George Pye, a loud and arrogant man who is the complete opposite of her deceased erudite husband, James. Flora’s friend Mercy flitters around and keeps a kind-hearted eye on Felix, whilst Felix befriends and confides in Jim, the gardener – who is unseen by everyone else until the very end of the play when his true identity is revealed to Flora and Felix… And there’s Rosie Pye, the daughter of George Pye and former girlfriend of Felix. She is a single mother, with a young daughter, who still has feelings for Felix.

The setting for the unfolding domestic travails is the Humble’s garden in summertime.

Director Kitty Cecil-Wright has assembled a fine cast of accomplished and talented actors who all deliver polished performances: Mathew Stone as the jittery and conflicted Felix, Chrissie Derrington as the self centred and indomitable Flora, Bruce McIntosh as the foul mouthed and brash George Pye, Ann-Marie Stone as the nervy and put upon Mercy, Cherry McIntosh as the forgiving and sensuous Rosie, and David Hughes as the quiet and thoughtful Jim. Their characterisations of their respective roles are spot on and entirely believable.

The NFP support crew are to be congratulated for the actual stage set. The garden is replete with patio, pergola, potting shed, beehive and a garden crammed full with flowers, green foliage and lawn, (supplied by the local Everton Nurseries and Redcliffe Garden Centre). Not only that, the stage is bathed in golden light that gives the impression of sunshine and summer warmth, and the incidental sounds are perfectly synchronised with the dialogue and action. Particular mention must also be made Flora’s wardrobe which comprise a number of stylish and elegant outfits – as only to be expected of a former model and Bunnygirl.

Humble Boy runs until 2 November and is highly recommended. See it if you can.