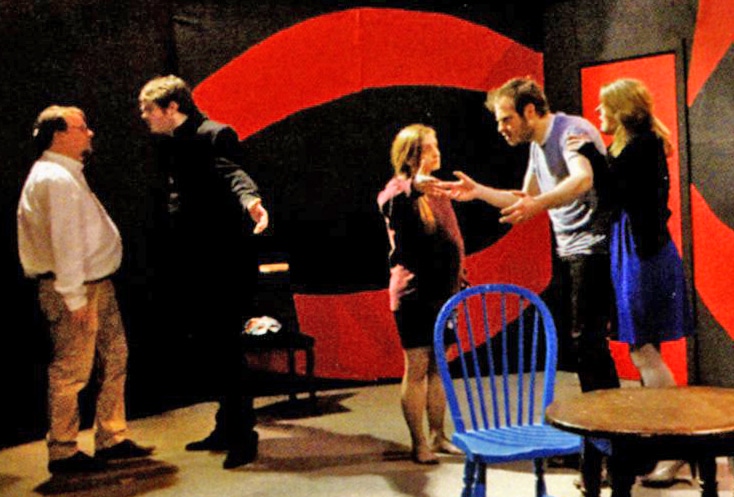 Which is preferable: a good play disappointingly performed or a poor play notably well acted? It’s an academic and slightly futile question, but this production of Immaculate is a good example of the second category. It is perhaps a bit unjust to call it a poor play, but it is fair-to-middling at best. What is beyond doubt is that it produces six really excellent performances.

The play, by Oliver Lansley, starts with a young woman, Mia, discovering that she is six months pregnant: a clever trick since it is nine months since she last had sex. That was when she broke up with her boyfriend, Michael, who is now involved with her best friend, Rebecca. Complications arise when Gabriel arrives and announces that Mia has been chosen for the Second Coming and is carrying the son of God, hotly followed by Lucifer, who claims that on the contrary, the baby is his: literally the spawn of the devil. Or did she after all have a one-night stand with her odious workmate, Gary? Each part is given a monologue to develop their character and to put their point of view, but if you look for much profound philosophical or theological debate, it will be in vain. Rather, one gets the impression that the playwright invented this surreally comic scenario and then ran with it wherever it took him.

Beth Harris as Mia gives a sparky and quick-witted performance. She is generally placid and even cheerful about the situation, and is ironically the least self-centred of the characters. However, towards the end she gives full effect to a speech reminding us that the whole premise of the play is that it is her body that has been invaded without her permission.

Michael, by contrast, is almost completely self-centred, but he is pretty thick and (understandably) bewildered by the situation. Gareth Richards is an experienced stand-up comedian, and his comic timing in the part is impeccable. Rebecca is the smallest of the six parts, but she has a tour de force of a monologue near the start of act 2 which Kim Fletcher brings off without missing a beat. Oliver Reed plays the insufferable Gary, beside whom the average contestant in The Apprentice would look like a shrinking violet, and gets full value from a caricature of a part that must be great fun to play.

There is a most promising performance as Lucifer from recent AUB graduate Sam Jenkinson. All the monologues are done well, establishing in every case an intimacy with the audience, but Lucifer’s is particularly impressive. One believes this fallen angel when he says, ‘I didn’t fall – I was pushed’; I liked, but was less convinced by, his plea that he wasn’t tempting Eve with an apple in the Garden of Eden, only ensuring that she got one of her five a day!

Scott Sullivan creates an absolutely credible and likeable personality for Gabriel. He is courteous to Mia and consumed with embarrassment when discussing her sex life. For an archangel, he is remarkably matter-of-fact, but he always toes the celestial party line and is a peacemaker except when Lucifer gets under his skin. Part of the secret of this outstanding performance is that every inflection, every gesture, every facial expression is understated and entirely natural.

It is potentially quite a static play, but Hayley Tucker’s direction does not fall into this trap, although all the movement is natural and controlled. Long pauses are used to good effect – always a sign of confidence in director and performers. The piece is played on a simple set in front of a striking black and red impressionistic background. The lighting effects are imaginative and efficiently done.

Warmly recommended for the quality of the acting, Immaculate runs until 17 February at 7.45 each evening.