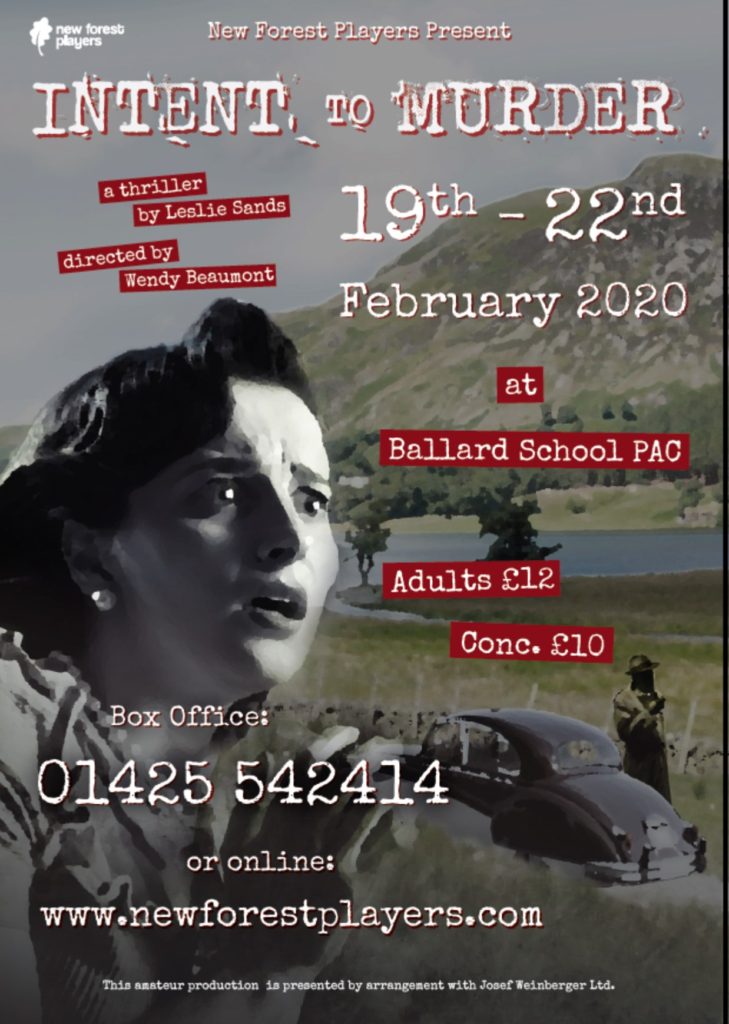 Famous romantic novelist, Janet Preston, arrives back at her remote Yorkshire Moors cottage and is shocked to find on arrival a mysterious man sitting in her living room – the shock is exacerbated by the fact that she has recently finished off her husband and, despite her confidence that she will get away with her crime, has yet to remove all the evidence – including the body! By coincidence, the stranger shares the same name (George) as her departed husband – as well as being her husband’s criminal associate who has come looking for him after a botched bank robbery. George blackmails her into agreeing to pass him off as her husband, who none of her friends and acquaintances have yet met, while he plans his escape in exchange for helping her dispose of the body.

Intent To Murder is written as a mystery thriller; the synopsis above gives away no spoilers, as all this information is revealed within the first few minutes of the play and the suspense is written as a dark character study with twists and turns, with the audience’s anticipated demand for justice while intrigued to find if the reluctant collaborators get away with their crimes.

The production started promisingly, with an open set providing a fine representation of a Yorkshire stone cottage and atmospheric music establishing the tone very nicely for an evening of mystery and suspense.

As with so many productions, this one suffered with apparent opening night nerves requiring an over-reliance on the prompt; however, with costumes and very good props helping to establish the period as the 1950s, there is excellent potential and an indication that NFP have a strong comedy calibre (notably from Chris Davis as an inebriated George and Kim Walker as Janet when the character was at her most devious).

David Luker’s portrayal of local vet, Mr Henderson, had more than a passing nod to Siegfried Farnon (as played by Robert Hardy in All Creatures Great And Small), with an amiable yet curious persona. Billy Matthews (Larry) shows very good potential in his debut performance, likewise Naomi Henderson as Larry’s fiancée, Chris, and I look forward to seeing their development in future productions.

It seemed strange to have so much emphasis of the Yorkshire location in the dialogue when all the characters evidently came from the South, but this could be explained away by Southerners relocating to the Yorkshire Moors. The appearance of Mrs Bunting (brilliantly played by Christine Battison), however, brought an additional element to proceedings that the production had been crying out for, with her role, clearly a comedic one to counteract the perceived gravity of the rest of the play, bringing all the apparent archetypal Yorkshire characteristics and accent to the fore.

Previous productions I have seen of Leslie Sands’ play have been played darkly, intently, with a firm emphasis on the thriller-suspense genre. Sadly, you cannot dictate what an audience will find funny. It wasn’t clear whether NFP’s intention was to produce a parody interpretation, but when several people in the audience laugh aloud at murders and dangerous situations, something has clearly become lost in translation. This is such a shame as the bones of a good thriller are there but would benefit from a bit more polishing.

Intent To Murder continues at Ballard School Performing Arts Centre until 22 February, 7.30pm each evening with a 2.30pm Saturday matinee.