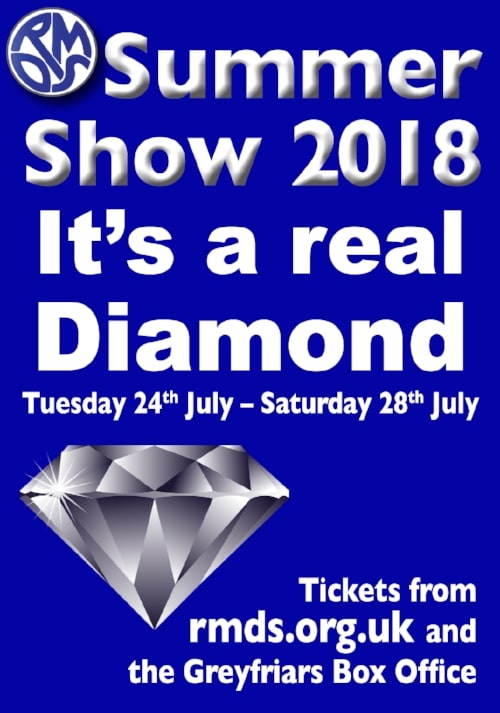 Ringwood Musical & Dramatic Society has established a tradition of performing a trio of succinct shows for their summer production, each individual and stand-alone but with a common theme running throughout, the respective directors given free rein on the kind of show that they present. This summer, RMDS has chosen diamonds as their theme in order to help celebrate Greyfriars’ 60th anniversary year (Greyfriars Community Centre being the venue for their productions).

I have been to progressive suppers where each course is in a different location; I have attended promenade shows where the audience follows the actors around a site as the show progresses; I think this is the first time, however, that I have attended a progressive production! RMDS have staged three short original shows simultaneously in three different locations, but the audience still sees all three in one evening as each ensemble performs their show three times each evening, with a finger buffet incorporated into the two intervals between each performance. By allocating colours (red, blue and yellow wristbands assigned to ticket orders), the order in which you see the shows is determined; I was given a red wristband – and, personally, I think I had the best order in which to see the shows (although probably those with different wristband colours would also think that their order was the preferable one!).

Diamond Heist was a lively yet gentle way to start the evening: as the instantly recognisable notes of Mission Impossible play out, five masked intruders make their way into a museum on the hunt for the Greyfriars’ Diamond, closely followed by three security guards. With the use of very familiar and popular songs from the last 30 years – and the addition of suitably witty amended lyrics – the story of the quintet’s quest to acquire the huge diamond is told with great humour and ease. Visual comedy, well-choreographed and well-rehearsed dance routines, a simple yet effective set design and creative use of the basic lighting rig all enhance the aesthetic appeal of the production, but the quality of diction, harmonies and mostly accurately pitched singing shows the musical potential within the society. Some of the singing is of a very high standard indeed; unfortunately, I am unable to give credit appropriately as the programme notes (as for all of the plays) don’t specify which named actor performs which number.

Debut director, Tamsin Fawn, has overseen an enthusiastic, committed and energetic show – reminiscent of the variety Gang Shows – in an encouraging opening production for this new director. There is something for everyone in this musical comedy, with genuinely unprompted laugh aloud moments from all members of all ages in the audience.

My second show of the evening, Dazzling Diamonds, is something completely different and shows how strong the musical and dancing calibre is in depth within RMDS. This is less of a narrative (although there is still a hint of an ongoing diamond search) and much more a showcase of vocal talent and exceptional dancing. The choreography is simply stunning, performed with grace, incredible flexibility at times and enormous style, particularly by the younger performers, covering a wide range from contemporary to tap, ballet to a touch of Fred Astaire and Ginger Rogers. The ballads are beautifully haunting and the overall vocal quality through a wide genre of songs is delightful. The only slight concern for me is that the amplification of the music at times threatens to overwhelm the solo voices, which is a shame as their voices have such a terrific tone. Although, again, I can’t give credit to the glorious dancers and singers, I am able to credit the wonderful saxophone tone of Oleg Zaremskyi when accompanying one of the most talented and flexible dancers I have seen on an amateur stage for a very long time. Full credit to director / choreographer / costumier Jane Howell for overseeing a first-rate production – I could have very happily watched a much longer show when the quality is this good!

My evening was rounded off by Greyfriars’ very own version of other well-known, long-running, televised talent shows with the live final of Diamond In The Rough. Compered by (show director) Andy Steeds and accompanied by musical director, Alastair Hume, the last 6 competitors go head to head in the live singing competition, complete with video recored interviews with the competitors, obligatory sob stories, television cameraman capturing each minute and inevitable phone vote for the wide range of songs and musical acts.

Debut director, Steeds, brings together in this mini-production not just the musical but also the comedic acting skills within RMDS. Characterizations are terrific, YMCA from an unforgettable quintet will never be the same again and every possible bit of humour is elicited with panache. Again, I can’t credit the actors themselves, but ‘Tyrone’ sings a Cat Stevens’ classic with excellent vocal tone and musicality while also portraying an arrogant and vain ‘glamour boy’ to perfection, ‘Ophelia Teats’ passionately sings the haunting ballad from Twilight and ‘Anita’ simply wows the audience with her range and versatility.

There are no rough diamonds on display in RMDS’s summer extravaganza in this very fitting tribute and homage to Greyfriars’ diamond anniversary. This is a great way of passing a summer evening with high class variety entertainment – enjoy!