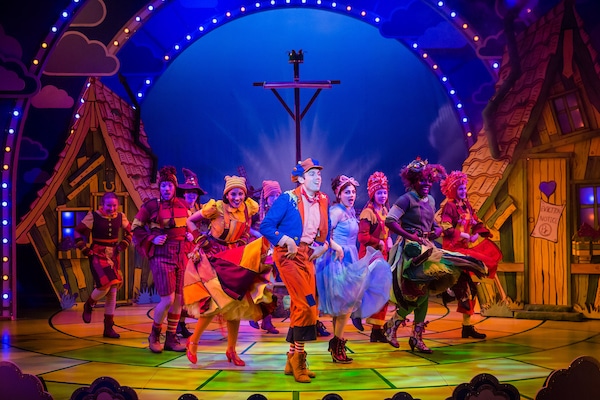 The Salisbury pantomime has always been a favourite with our family. It was an annual fixture in our children’s diaries and even now that they have long since flown the nest, Salisbury is still my wife’s and my venue of choice for our yearly fix of panto. Its secret is that it strikes so many balances so well. It brings out the scary element that is in every pantomime’s story, but mixes it with plenty of fun and colour. There is sophisticated humour for the adults, but not so much that uncomprehending children get bored. It provides spectacle, but keeps a feeling of intimacy by not going over the top. Most of all, it responds to modern trends, whether in music or cultural references, while remaining true to the established atmosphere, storylines and trimmings of traditional pantomime.

Jack and the Beanstalk continues the proud Salisbury tradition without missing a beat. The staging is superb, with a colourful and ingenious set and excellent lighting design. The growth of the beanstalk is spectacular, and the appearance of the Giant onstage for real is a triumph of costume engineering and control. The choreography is imaginative – ‘Do the milk shake’, in Dame Trott’s dairy, is the stand-out number – and excellently executed, not least by the team of six local children who make up most of the chorus. All the cast sing well, with some nice harmonising, the clever arrival of the beanstalk being accompanied by an unforgettable version of ‘Bohemian Rhapsody’.

It is not often that a show belongs to a ruminant, but this one is very nearly stolen by the cow, Pat (geddit?). Played by Laura Crowhurst, she is at different times bolshie, jolly or emotional, but her ample form draws the eye whenever it is on stage, a rapping cow being one of the highlights. She acts well with the Dame, played by Richard Ede with immaculate timing, who is (of course) frustrated in love until she takes up with the ineffectual King Crackpot (J J Henry): another highlight is the scene where they each lose two feet in height.

Sam Harrison shows his versatility as Jack, whether clowning around and falling over a lot or furthering his romance with Princess Jill. Jill is a sparky, modern principal girl, far removed from the dripping wet heroine of traditional panto, and is played well by Tanya Shields, while she and Sam make their love story genuinely touching. Jemma Geanaus brings great enthusiasm and energy to the role of Fortuna, a sort of fairy godmother figure who flits in and out of the action. Evil is represented by Nightshade, the Giant’s henchman, and Steven Serlin skilfully milks his full quota of boos and hisses.

One of the joys of panto, if you are not taking your own children, is to listen to what my wife calls the ‘fat chuckles’ of the youngsters around you. You will find plenty of those, and much else to enjoy, in this excellent production, which runs until 7 January. Times vary: see www.salisburyplayhouse.com/whats-on/main-house/panto/