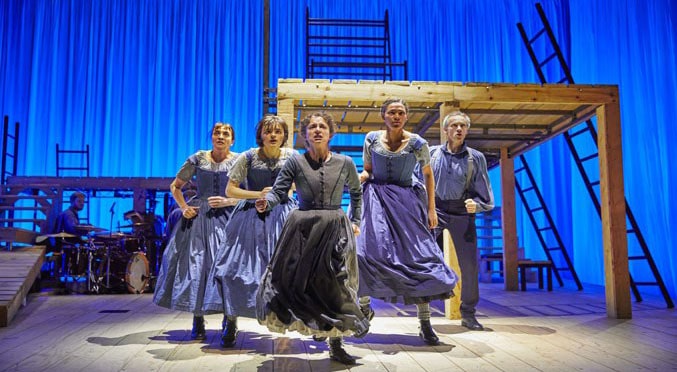 This year marks the 170th anniversary of the first publication of Charlotte Bronte’s novel so it seems an appropriate time for this National Theatre/Bristol Old Vic collaboration to tour prior to a London season – although the production actually began its life at Bristol Old Vic back in 2014 before transferring to the National the following year.

Most of us, I’m sure, read the book as children; I personally have very distinct memories of being frightened by the fire at Thornfield Hall that had been started by the mad woman in the attic, but the entire story of the young Jane Eyre somehow surviving her awful childhood to become a well-loved governess to Mr Rochester’s ward, Adele, made a huge impression on me.

Over the years I’ve seen stage productions that told the story well enough but were perhaps less than exciting; this one, with wooden platforms and metal stepladders serving as the set, really encourages the audience to imagine the likes of Gateshead Hall, Lowood School and Thornfield Hall rather than having them presented on a plate, as it were.

It is also an extremely physical production in which the actors rarely simply ‘enter stage left’ or whatever. Instead they use the various levels to get from A to B, and often at breakneck pace. Events such as stagecoach journeys are also a lot more physical than one might normally imagine, and at the opening night performance in Southampton there was a ten-minute delay mid-way through the first act when one of the performers apparently twisted her ankle during one such scene, causing the safety curtain to be lowered while the injury was strapped up.

Also unusually, there is music played by three musicians seated at the rear of the stage or sung by the excellent Melanie Marshall, who also gets to play with matches as Bertha Mason. A lot of the numbers are of a ‘folksy’ nature but there are a few surprises, the inclusion of Noel Coward’s ‘Mad about the boy’ seeming particularly appropriate.

There are so many innovative ideas, too, with some costume changes being achieved by coat hangers being flown down, portable wind machines used to get a billowing effect on a wedding veil, hand-held lights clustered together to depict a fire (a proper one in a fireplace, as opposed to the real flames that were used when the house was burning).

This particular production dwells for some considerable time on Jane’s early life, beginning with her birth, unhappy times at Gateshead Hall with her ‘aunt’ and then at Lowood School; in previous versions I have seen, all this is mentioned only in passing, with the ‘story proper’ beginning with her arrival at Mr Rochester’s home, Thornfield Hall.

Nadia Clifford therefore plays Jane from baby to adult, and her relationship with the surprisingly likeable Mr Rochester (Tim Delap) is beautifully and often humorously portrayed, with a real spark between them. The rest of this excellent cast each play several contrasting roles, which in Paul Mundell’s case includes Mr Rochester’s dog, Pilot, and for Evelyn Miller allows her to change sex as soon-to-be missionary, St John.

Knowing that the show runs for three hours, including an interval, I did wonder if I might be bored. Not a bit of it, and I could happily sit through it all again tomorrow. Many of the predominately young audience very possibly felt the same, as they leapt to their feet to give a standing ovation. Charlotte Bronte would have been proud.

There are further performances from 10 to 13 May, each evening at 7.00 with matinées on Thursday and Saturday at 1.00.