This is the second of the AUB’s double bill of plays exploring – well, fake news, for want of a better explanation, the first having been Lillian Hellman’s The Children’s Hour, which I reviewed yesterday. In both cases I was chilled by the realisation of how people are so easily swayed by those with the loudest voices, and if a certain American President should have come so much into my mind today, it must surely have been coincidence. 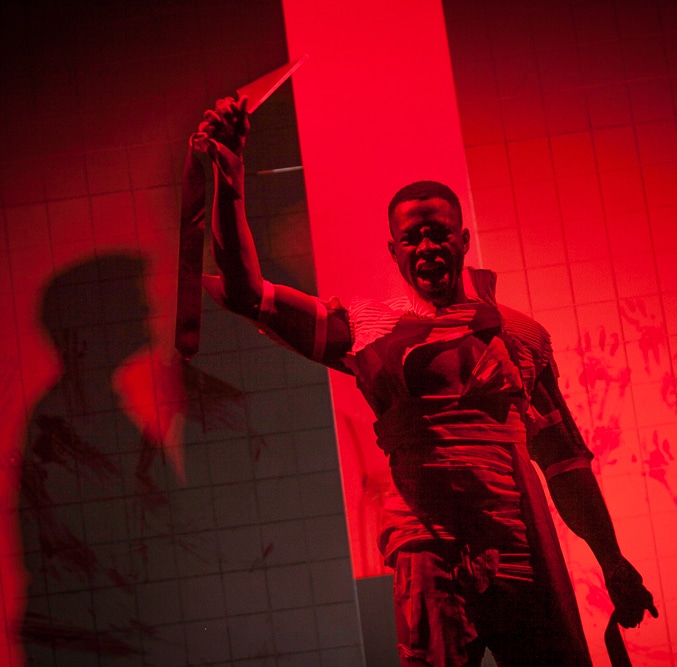 This production, performed by a multi-cultural cast, has some of the usually male characters played by women, whether by necessity – there are far more women than men in this year group – or design. Whatever the reason, it was not detrimental to the story in any way.

The set is simple – just light-coloured and, latterly, bloodstained sliding screens – while the costumes seem to be essentially army-type desert gear bound with what appear to be bandages. Superb lighting effects play a huge part, as does the menacing background music and sound of battle.

Most unusually for an AUB production, there were far too many occasions when I simply did not catch what people were saying, yet I was sitting very close to the front and am not at all deaf. The problem seemed to be in actual clarity of speech, or lack of it, and strangely, it was the men who were guilty in this respect. I could hear the sounds, but they were simply unintelligible, and I do question how anyone can expect to work professionally as an actor unless their speech is totally clear, no matter what language they may end up speaking in.

I don’t have room to mention all of the 19-strong cast, but as well as Cy Grove’s pompous, laid-back Julius Caesar (shades of that President again!) and Dilan Raithatha’s manipulative Mark Antony, there are stand-out performances from Fola Adeyoola (an excellent Marcus Brutus), Sarah Cribdon (Casca), Yvonne Grundy (Caius Cassius), Jes Gislason (Soothsayer/Decius Brutus) and Bethany Salt in the contrasting roles of Portia and Octavius Caesar, all of whom give strong, impassioned performances.