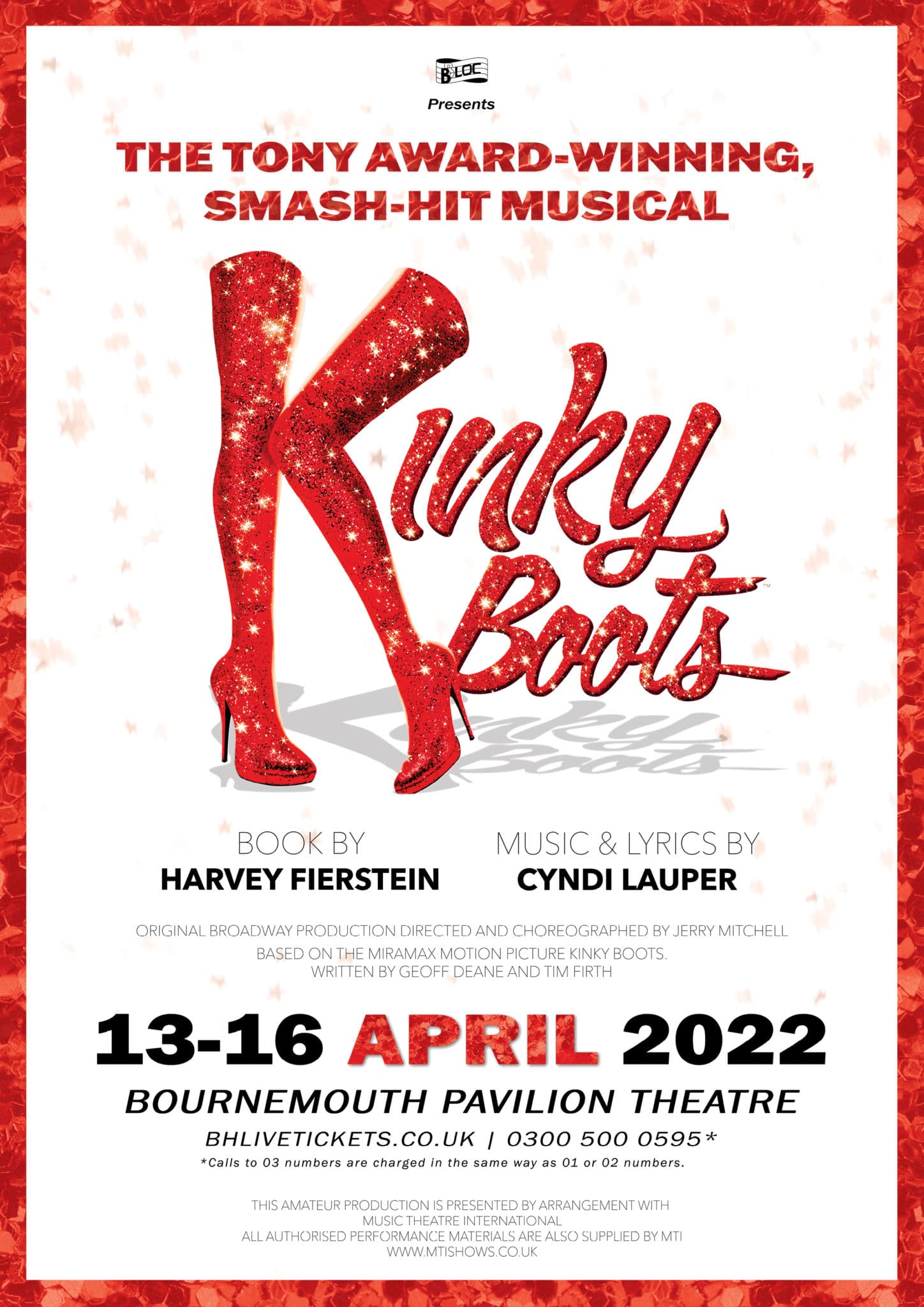 I was excited to attend the latest comedy musical by BBLOC, having seen their brilliant Priscilla, Queen Of The Desert in 2017, and this show certainly didn’t disappoint.

Cyndi Lauper, the Tony award winning popstar, wrote Kinky Boots and the West End show won three Olivier awards in 2016, including Best New Musical. The plot is largely based on true events. Charlie Price inherits a struggling shoe factory in Northampton, where they make good quality, but unfashionable men’s shoes. Despite his plans to move to London with his ambitious fiancée, he reluctantly decides to try to save the business.

After a chance meeting with Lola, a drag queen, Charlie decides to form an alliance, in order to design and manufacture some sturdy but sexy footwear. Between them they develop the Kinky Boot. It is an uplifting story with some great show tunes, and as we go from the factory floor to the catwalk in Milan, Charlie and Lola realise they have much more in common than they first thought.

This is a big budget production, so the show had the ‘West End’ feel right from the opening number. The colourful set, constructed to look like the inside of the shoe factory, was particularly impressive, showing great attention to detail.

The whole cast are superb, making it difficult to remember that this is an amateur production. Matt Stockham, as one of the principals, is faultless as Charlie. His acting and singing skills are of the very highest quality and he is totally convincing in the part. The role of Lola is demanding and requires someone who can not only sing but play the part with both cheekiness and compassion. Lea Martin did this in spades. He does have some of the best lines in the show, but his excellent comic timing made his performance funny as well as poignant – the scene in the nursing home is particularly memorable.

Amy Cave provided great support as Charlie’s fiancée Nicola; she has a beautiful voice. Jessica Dawson-King in the role of the lovelorn Lauren, played the role to great effect making the most of her down to earth character and comic scenes. Sean Hardy, as the hard man Don, was very well cast and Dominic Scott, playing two parts, was excellent, particularly in his scenes with Charlie. He also has a great voice and is a natural performer. Rhiannon Lawton, Jo Uzzell and Darren Ellery were equally convincing, and the two boys Finley Bosher and Harry Payne were both talented and very cute!

The ‘Angels’, the drag queens from Lola’s night club act, unusually included both men and women, but they are used to particularly good effect in the cleverly conceived boxing scene.

The music was played live from the pit by 10 musicians under the baton of musical director Ian Peters and they did not put a foot wrong all evening. Great choreography by Heather Davis, plus lots of flamboyant costumes and a fabulous company of factory dancers and ensemble made this a very slick and professional production. With 35+ in the cast, this show could have been a challenge to direct but in the very competent and experienced hands of Helen Barrington the show was flawless.

The large audience at the Pavilion were captivated by the show, giving it a standing ovation at the end. If you want a superb show which is equivalent to anything you would see in London, catch this one until Saturday 16 April. You won’t fail to be impressed that we have so much local talent.