It is easy to see why Ladies’ Day is so popular with amateur dramatic societies. It has four strong parts for women, a good plot and some very funny lines. It also has some thought-provoking things to say about some of the fundamentals of life: families, growing old, class, what it is to be a woman, and love itself. It may be popular but that does not make it an easy play to bring off. This production most emphatically does bring it off.

The four women already mentioned are fish-packers in Hull, who go to Ladies’ Day at Royal Ascot when that festival of horse-racing was held at York while the racecourse after which it is named was being refurbished. Completely removed from their customary surroundings and fuelled by champagne obtained by fair means or foul, the four women find out things about themselves and each other which suggest that things can never be the same again. But the next day, nothing has changed – or has it?

The play really stands or falls by the performances of the four actresses. As Pearl, whose imminent retirement the party at York is celebrating (although she insists that she is not retiring, just leaving), Jenny Green is nothing short of outstanding. She conveys the wisdom of the older woman in handling the excesses of the other three, but also the pathos in the character in a performance which at times is genuinely moving. Her surprising confession that she is not all she seems is a tour de force.

At the other end of the age-scale, Shelley is barely out of her teens and, although she is apparently confident and not slow to create tension among the group, it becomes clear that there is sadly little behind her bravado. It would be ungallant to wonder how long it is since Hannah Marks’s teenage years, but that makes her performance the more commendable, capturing with superb accuracy the bolshieness and mischief-making of a teenager. 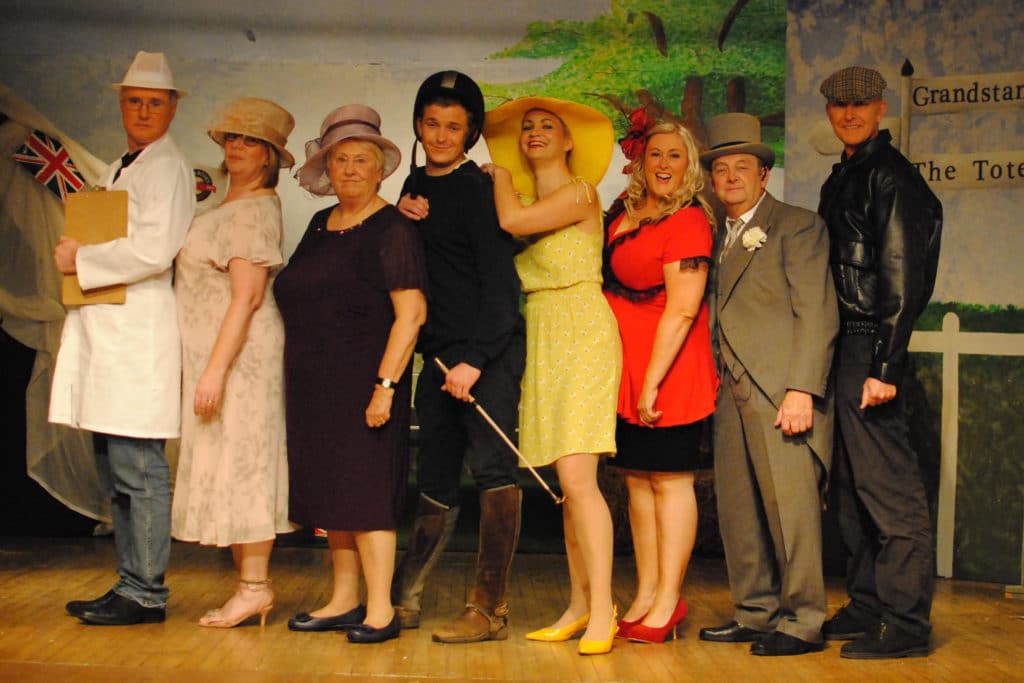 Tracy Davis brings out well the thoughtfulness and sensitivity of Jan, who as a result of those qualities is put upon by the others. As she is apparently the most conventional of the four, the revelation of her secret is in its way as surprising as Pearl’s. Tracy does a nice line in acting drunk – not nearly as easy as it seems – but should switch off the swaying and stumbling during other characters’ important speeches.

Linda is kindly but gauche and definitely not the sharpest knife in the box. She is probably the least well-defined of the four characters, but there is a sweetness to her that sets off the occasional acerbity of the other three, and it is essential that she is likeable. Donna West is indeed both sweet and likeable in a performance that loses nothing by comparison with the other three.

Four really strong performances, then, but there is also good chemistry between the four, and they keep up the pace exceptionally well. The northern accents are variable but sustained well and it doesn’t take long to tune in to them.

Against a cleverly designed and well-painted set, Louise Dibden’s layered direction is full of life and variety. The semi-striptease, when the women change out of their work overalls into their Ascot finery, is inspired.

The cast must have been buoyed up by a hugely appreciative audience, whose enjoyment was a measure of the quality of what they were watching. This was my first visit to the Vernon Theatre, but if it was a reflection of the standards reached there, I am already looking forward to my next.