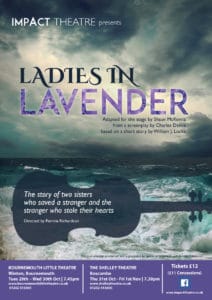 Ladies In Lavender originates from a short story by William J Locke and is set on the outskirts of a Cornish village by the sea. This production from ImpAct Theatre effectively takes up the challenge of transporting its audience to gentler times, between the two wars. A time where a pleasant evening could be spent listening to the radio or reading. I can almost smell the Cocoa.

The Widdington sisters, who have spent their entire life, so far, living in this cottage, complement each other beautifully. The practical but guarded sensitivity of Janet, portrayed by Beverley Beck, is enhanced by the emotional and romantic character of Ursula played by Joanne Dunbar. The shared history and close, enduring relationship between the sisters is delightfully expressed by these two consummate performers.

The stranger, Andrea, played by Adam Forrester, throws the lives of the two sisters into a sense of turmoil, revealing unspoken emotions and lost opportunities whilst drawing the audience further into the plot. The presence of Andrea seems to act as a catalyst for an exploration of life, love and lost passions. His performance is sensitive and believable. Dorcas, the housekeeper, brings humour to this production with her “no nonsense” manner, perfect timing and a very natural Cornish accent, effortlessly performed by Linda Denning.

Doctor Mead, portrayed by Martyn Brown, is a widower who gives a good performance as the local practitioner and appears to be infatuated with another exotic visitor. Olga, the focus of his romantic attention, is played by Kelly Anne Singleton who is eminently believable as the strong, independent artist of Russian origin.

The staging of this production is incredibly effective, creating four distinctive sets. Actors move deftly between these areas with careful timing, maintaining the pace of the plot. The stark black walls of the backdrop focus the concentration of the viewer on the active areas of the stage. The authentic detail of the set is interesting, the two armchairs in the sitting room seem to express the individual characters of the two sisters. Janet’s chair is firm, upright and sensible whilst Ursula’s seat is lower, softer and gives the appearance of being very comfortable.

The somewhat melancholic musical motif creates a compelling atmospheric backdrop but is in danger of being over utilised at times. Nevertheless, it manages to underpin Andrea’s musical aptitude and draws the audience deeper into the tale of loss, hope and yearning for what could have been and what could yet be. Ladies In Lavender is a powerful tale of age and youth, regret and longing and you can still catch this production at the Shelley Theatre from 31 October to 1 November.

Editorial: This production is being held at two venues – Bournemouth Little Theatre (where this performance was reviewed) before moving on to the Shelley Theatre in Bournemouth for the remaining performances.