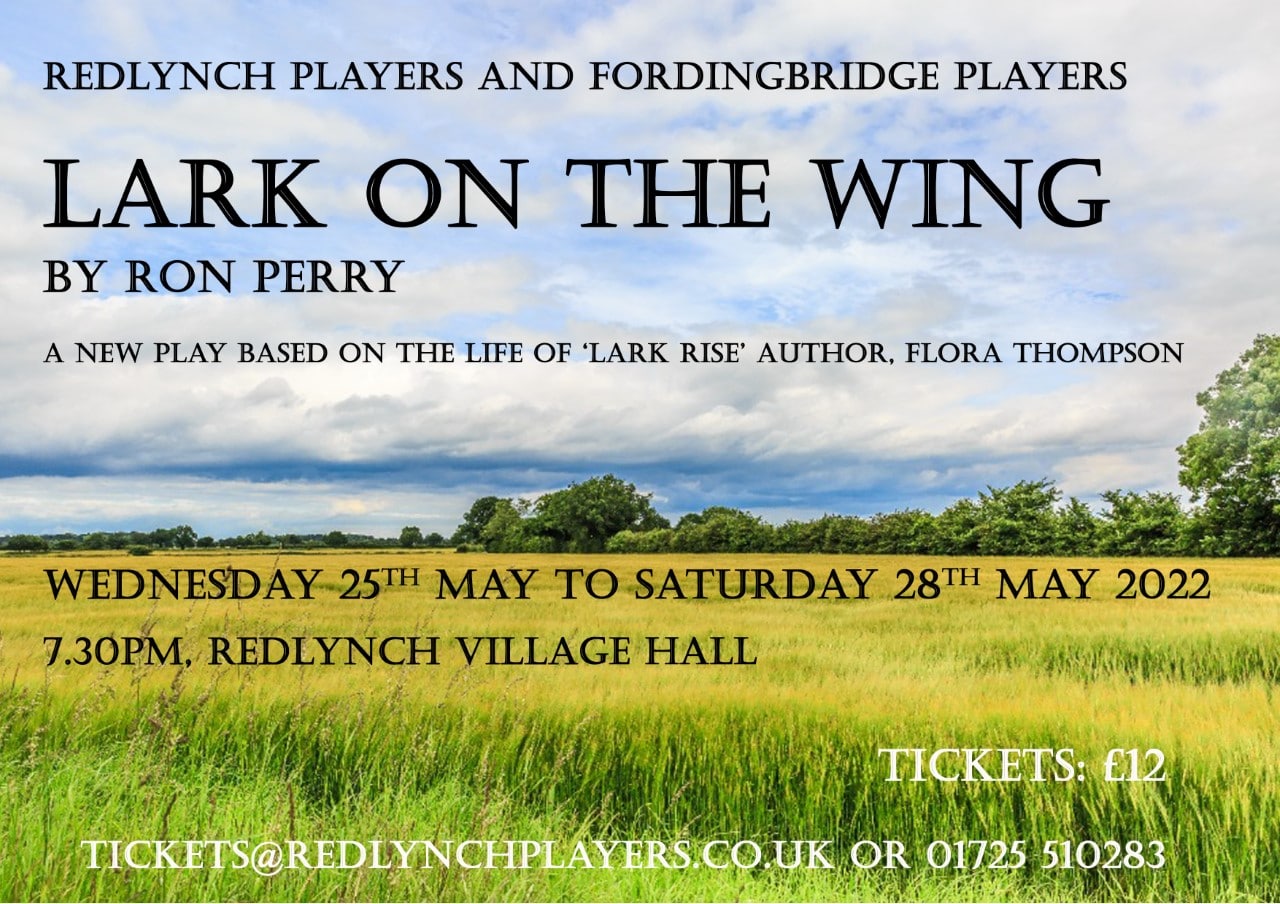 Redlynch Players and Fordingbridge Players have re-joined forces to present the premiere of Lark On The Wing, a new play retelling the life of much-loved author Flora Thompson, written and directed by Ron Perry. The two theatre groups have collaborated with great success previously and Ron Perry has established a good track record with them. The run of success continues with this latest delightful production.

Flora Thompson is probably best known through the BBC Lark Rise To Candleford television series that ran from 2008 to 2011 and made household names of its cast. Great Sunday evening viewing that provided a warm and cosy portrait of life in the Oxfordshire countryside in the latter stages of the 19th century – portrayed as a golden age of the rural idyll. In truth, life in rural England at that time wasn’t actually like that. For many people, including Flora’s family and neighbours, it was all about surviving in dire poverty, with no more than an elementary education and very little prospect for improvement to their lot. Even so, in her life Flora somehow managed to transform herself from a callow girl (who left school at a young age) into an author of accessible lyrical prose of a high literary standard, which sympathetically captures the travails and delights of ordinary folk from a bygone era.

Notwithstanding the insight provided by the semi-autobiographical Lark Rise To Candleford trilogy of books, relatively little is known about Flora’s adult life. Ron Perry’s Lark On The Wing reveals more by taking us on a journey through her life, conjuring up rich imagery, whimsical and peculiar characters, tragedy and joy. Most notably, he also gives high praise and a fresh voice to the woman who, against great odds, was determined to write her stories and poems and to have them published.
The play is set on a simple stage at floor level, with the audience gathered around in a semi-circle to create an intimate and conducive atmosphere. There is a backdrop of four tall panels depicting a photographed scene which is reminiscent of flat North Oxfordshire farmland in summertime – originality and a degree of professionalism on display that would normally grace a large theatre rather than a village hall. In addition, well-matched musical accompaniment and traditional folk songs are provided by talented Paul Stacey.

The performance begins with a humorous introduction that ostensibly commemorates the 75th anniversary of Flora Thompson’s death, but also provides a doorway to the story of her life that starts to unfold in Act One of the play. It is now 1938 and Flora Thompson (perfectly played by Ali Silver) is centre stage looking back on her life. She is the narrator of the story and also seamlessly slips into the role of Flora herself as she grows from childhood to adulthood. Along the way a large array of colourful and humorous characters are brought to life: Flora’s mother Emma Timms, her brother Edwin, school teacher Miss Holmyard, Post Mistress Kesia Whitton, the rustic residents of Juniper Hill, and many more that can be found in Lark Rise To Candleford.

While Act One is light-hearted, Act Two is a more serious and emotionally charged affair which deals with the melodrama of death in tragic circumstances, a strained marriage and the struggles Flora faced as a mother and wife, and as a frustrated author.

The play is essentially a story in two parts that Ron Perry manages to fit perfectly together with a very satisfying result. Its depth and range requires an ensemble of cast members and it would be inappropriate to select individual performances for special praise, though as already intimated, Ali Silver does stand out in her dual roles of Narrator and Flora Thompson through the ages. This is a very challenging part and she delivers a nuanced performance with skill. All of the other cast members, many playing two or even three parts, were very good indeed. Similarly, the entire production team are to be congratulated for bringing everything together in perfect order and timing.

This year also marks the 65th anniversary of the Redlynch Players and, with the help of the Fordingbridge Players, they have once again delivered a production of high quality.

Lark On The Wing runs until 28 May but, if you haven’t already booked a ticket, your only hope of seeing it this time around will be dependent upon returns, as all performances have sold out!