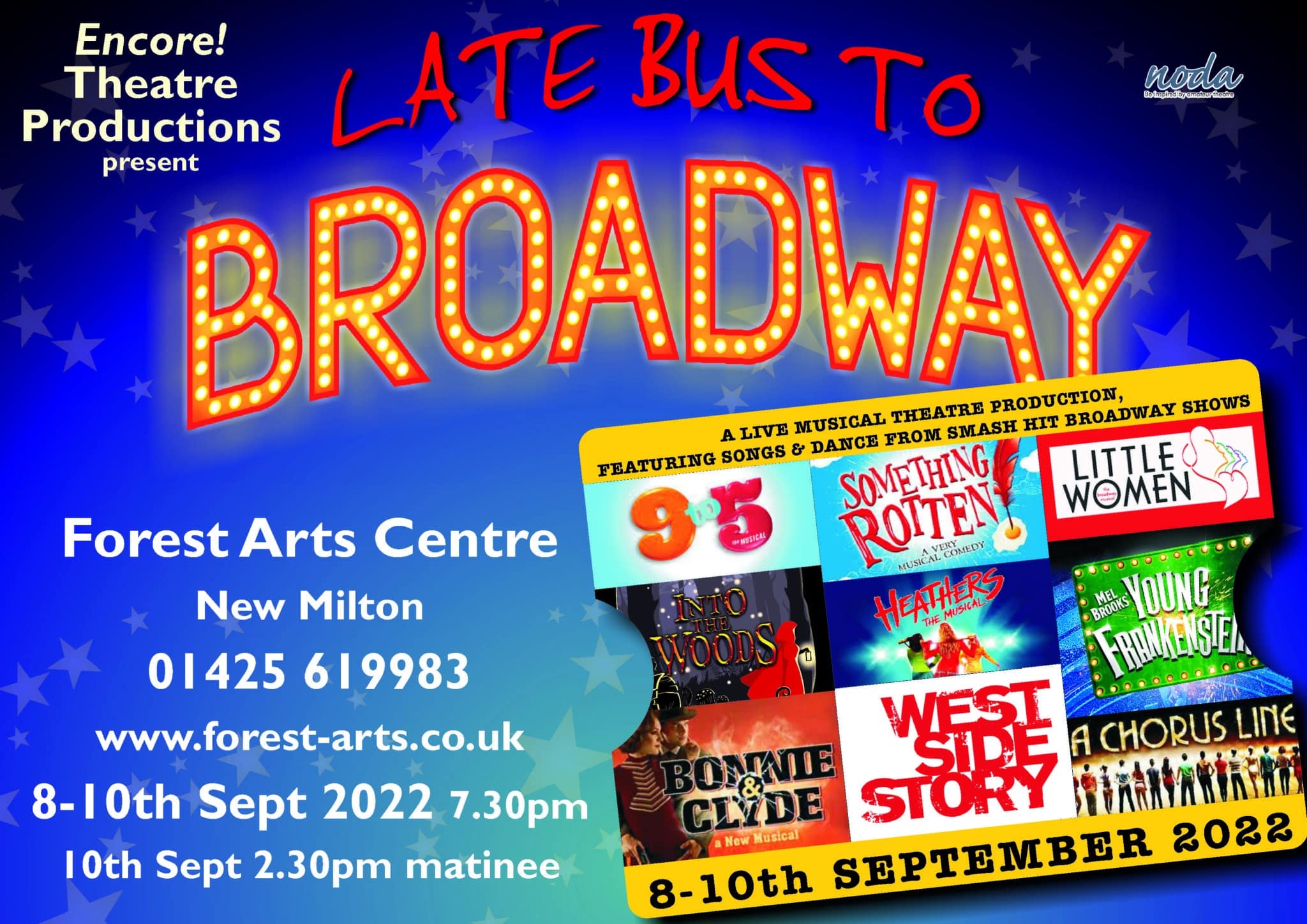 Encore! Theatre Productions are experienced at presenting Broadway Musical showcases, this time choosing numbers from West Side Story, Little Women, Bonnie And Clyde, IntoThe Woods, 9 to 5, A Chorus Line, Heathers and Something Rotten! This could have made for a challenging evening, but from the opening number it was obvious we were in good hands.

The simple but effective staging, consisting of two raised platforms upstage right and left, provided the opportunity for the company to exploit different levels. This meant that the audience got to see the faces of the fourteen strong cast, but also allowed the creation of clearly defined acting areas when needed.

The lighting was used to good effect to create atmosphere, but there was just one occasion at the end of ‘Here Alone’ (from Little Women) when the actress wasn’t lit. The pre-recorded tracks worked well, although I found the music a little too loud at times. A smoke effect was used at various points throughout the show, but I wondered if this was surplus to requirements, with the possible exception of the Into The Woods section, as it became rather distracting. On the other hand, the use of projections helped create the appropriate mood for each musical, notably West Side Story, Bonnie And Clyde, Into The Woods and Something Rotten!

With 32 songs from eight different shows, set in different eras, there was a need to source a wide range of costumes, and to change them very quickly! This was all done very smoothly, and even the one wardrobe malfunction (where one cast member nearly lost her trousers) was well handled.

The choice of musicals was interesting – some very well known, but some, I have to admit, I had never heard of. The eclectic mixture made the structure of the show seem rather disjointed, and any description of a plot redundant. Perhaps the show would have benefitted from a compere, both to introduce the nature of the evening, and between the different sections.

That said, the singing, dancing and acting were all of a very high quality. The biographies of the cast show a depth of experience, and in many cases a professional background. Most of the numbers involved the whole cast, but there were also stand out performances from the excellent Anne-Marie Davies and Rossano Saltfleet, both of whom have beautiful voices. The highlight of the show for me was when they sang ‘Tonight’ from West Side Story – a real goosebump moment. Sterling support was provided by Chelsea Robson, Julian Smith and Beverley Beck in particular, along with Cayton Francis who played a very amusing wolf and the multi-talented Shae Carroll for his excellent dancing and choreography.

Jo Mansfield did a great job in directing the show, as well as choreographing many of the numbers. Transitions between songs and the various shows was seamless. With such a large cast and so many numbers and costume changes, this was no mean feat.

Despite the sad news of the Queen’s death coming on opening night, this company followed the tradition in the theatre of “the show must go on”. A respectful one minute’s silence was held at the top of the show, and then we were immersed in 1950s New York for West Side Story. What followed was a fabulous evening of entertainment – the energy, enthusiasm, talent and sheer professionalism on display in this show was quite exceptional. I was very impressed. So, if you have a sense of melancholy at the moment, I can highly recommend this show. It’s bound to make you smile.