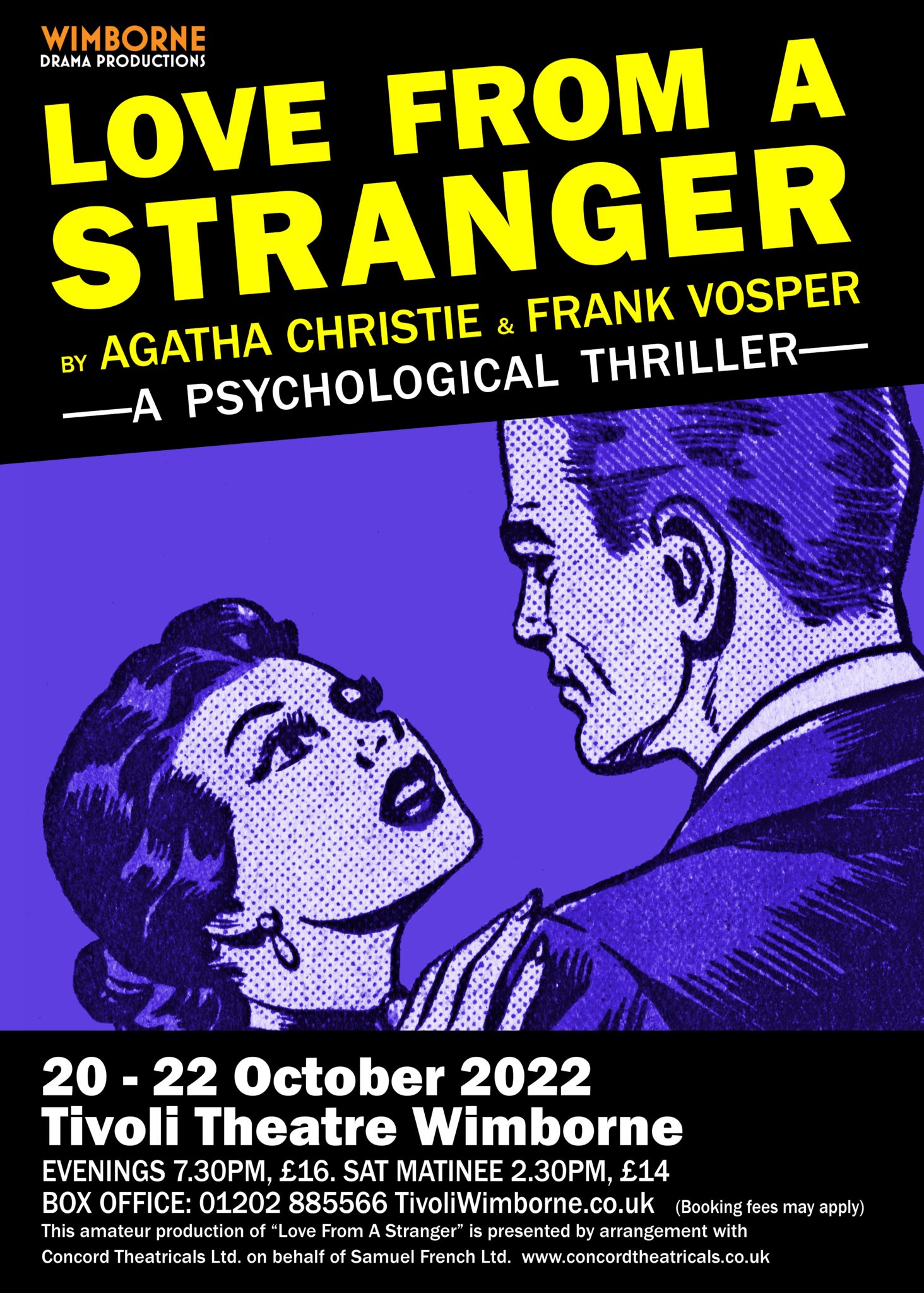 How marvellous to see so many people in the main auditorium at the Tivoli Theatre in Wimborne on a Friday night! There seemed barely to be a free seat in the house and I felt honoured to have one! This is testament to the draw of the Tivoili generally, but also to the clear fondness of and audience loyalty to Wimborne Drama Productions.

WDP are back on familiar territory with an Agatha Christie short story adaptation. This is not a classic Christie whodunnit by any means. It is promoted as a psychological thriller and that it certainly is. Cecily (Tracey Nicholls), having won a significant sum of money, is reassessing her life and her relationships, when in enters a complete stranger, Bruce (Richard Cawte). Bruce wishes to rent the London flat she owns and shares with Mavis (Lindsay McGowan) with whom she split the prize money. Bruce sweeps Cecily off her feet and Cecily’s life takes a major and more sinister turn…

I want to mention the backstage contributions first as the backstage crew are often not given the credit they deserve. The set, costumes and props were great and seemed perfectly in period and appropriate. One gripe I often have, especially with period pieces, is the lack of attention to the floor. It is a shame to rely on the bare stage when a few rugs would not only be in keeping but would assist in making the sets feel more homely.

The lighting is very good and well considered. A special word must go to the sound crew. The music interludes work well and the sound effects, particularly in the psychotic episodes are very effective. A grateful nod is due to the programme, again often overlooked. It is nicely presented and informative with some relevant and interesting pieces in it.

The play is dominated by Tracey and Richard who have significant stage time and interesting character development opportunities. They work well together and establish a convincing storyline. I felt that Tracey at times did not seem completely at ease in her character, which detracted from some of the more intense moments. Also, Tracey found herself too often having to present lines upstage, which can be easily remedied. Richard gives a well observed performance with a nicely nuanced character development and I think is excellent in the part.

The supporting cast are very strong. Good leads can be let down by poor performances by the supporting actors, but this is certainly not the case here. Although it is a shame to pick out individuals, a special mention should go to Auntie Loo-Loo (Jenny Hughes) and Nigel Lawrence (Tony Feltham). Auntie Loo-Loo is a very nice scene stealing character played beautifully by Jenny. Nigel is a difficult part, which Tony makes his own with a sincere and sensitive performance.

The second night of a show can always be ‘tricky’. There is not the buzz of a first night backstage and there can be a danger of complacency and a lack of sharpness. I did not perceive any of these issues. The pace was well maintained. Some scenes a little too static at times, which would have been a bigger distraction if the pace dropped. So, congratulations to the director, Rob Cording-Cook, for providing us with a very solid and ultimately gripping play.

Overall, a very enjoyable evening and I would urge anyone at a loose end on Saturday 22 October to try and get a ticket for one of the last two performances.