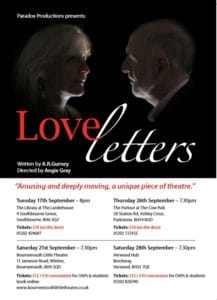 It’s Date Night for me and the ex-wife (long story, and this isn’t about me). You don’t really want Date Night to end in tears, now, do you? Well, it did. Kind of. But, in a good way.

The Larderhouse in Southbourne is a quirky and interesting venue, and, for my mind, the perfect place for this kind of theatre. “A different kind of production”, as director Angie Gray told me; and it is. Different, deeply moving, funny in places, beautiful in places, heart-breaking in places and delivered in a format and manner that suits the piece like no other could.

Love Letters by AR Gurney is… how do I describe it…? A lifetime set of letters, missives, notes and the like between two lifelong friends/lovers/crutches/confidantes, call them what you will. The piece serves as a reminder of how communication in this day of instant messaging, email, SMS, WhatsApp and the like, has somewhat lost its soul and meaning.

It was first performed in 1988 by the author and Holland Taylor (the mother from Two and a Half Men), and has since been picked up and performed by such luminaries as Lynn Redgrave, Charlton Heston, Sissy Spaceck, Tom Hanks, Mia Farrow, Brian Dennehy… The list goes on. A look at the Wikipedia page for this piece is a who’s-who of the absolute acting elite. So, on reading that, one feels that this is a top quality piece of theatre.

Quite hefty theatrical shoes to fill, you may think, and yes, you’d be right. But then you realise that Louise Thomas and Harry Susser are on the case. Two of the finest actors in our area with two of the most mesmerising voices I’ve ever heard.

The letters start at a young age, with a birthday party “Thank you”, moving through childhood letters to teenage missives from summer camps, where we hear they have snogged each other and got jealous about the snogging of others, through to boarding school experiences, University and life for each beyond. The two letter writers do drift apart for a time – at least physically, but the link, the unbreakable link between the two, is upheld by the glue of these letters.

All the ups and downs of life are laid bare for us to see and hear, and will in one moment have you laughing out loud, while the next gasping with worry or moving to the edge of your seat in anticipation, then the next stifling tears.

The delivery of the piece was designed to be read to us by the two actors. They arrive to delightful piano music, sit together, before us, at two lecterns and the exchange begins.

Initially, for me anyway, the attention is drawn to the person you are hearing. Then, you realise that what you are hearing is, in fact, in the mind of the other performer, who is ‘reading’ the letter.

So, I watched the ‘reader’ and it was then that I saw the acting – what I was seeing and hearing – merged by the sight and sound coming from two different places, but presenting themselves as one, to me. The subtlety of body movement and facial expression is essential so as to not overdo or underdo the moment. You get to see, hear and feel the whole gamut of emotions – joy, devastation, anger, excitement, amusement, anxiety, everything.

Usually, when reviewing, I like to write a separate paragraph or at least a sentence or two about each performer, but such is the talent of these two in delivering this piece, such is the exquisite direction in creating this moment for us, the audience, I am finding it difficult.

So, I have no ‘Best moment’ for you. No ‘Star of the show’. This whole thing was created and delivered in such a way as to have the whole production become balled up in my mind as one incredibly moving experience.

And, yeah… I cried. So did the ex-wife. And it was beautiful.

Go and see this, if you can. Take a hanky and a former partner/current partner/good friend. It’s an evening to be shared and to behold.