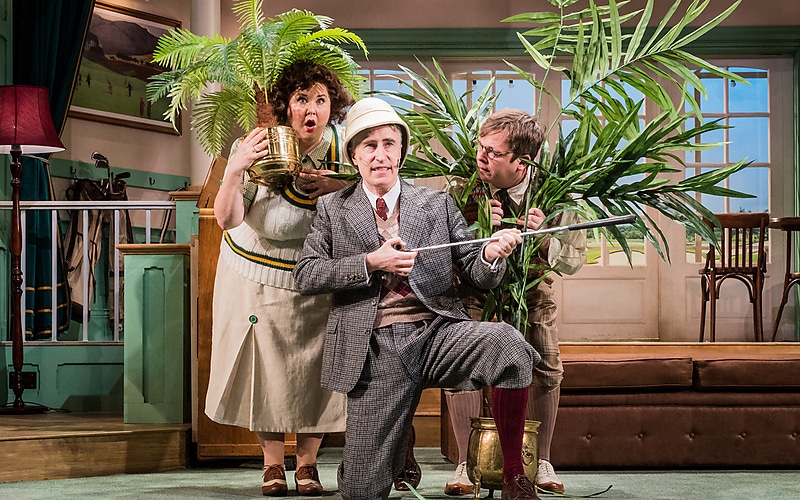 Lovingly adapted from the Golfing stories of P G Wodehouse by Jon Glover and Edward Taylor, this warm and witty script is never under par from the off. Michael Fenton Stevens immediately breaks the fourth wall and invites the audience for a couple of hours of crisp hole in one story telling.
The premise is simple: using props scattered around a gorgeously designed late 1930’s golf club by James Button, the oldest member uses a versatile cast to tell stories of romantic liaisons to educate Jack in the art of love. The golf puns come quick and fast but this is more about spot on delivery of well constructed dialogue, wit and use of props rather than any real reliance on golf particularly, golf merely being the green based theme  for more elaborate tale telling decoration.
Adam Jackson-Smith is a delight as the conduit straight-man at the centre of proceedings whilst Michael Fenton Stevens effortlessly engaging, creates a world in which ever more elaborate and outlandish tales are told. Two couples are employed to drive the action utilising well placed items such as fans, fruit, chairs and pot plants enhanced by the ever faithful barman Fitt played with great comic timing by Tim Frances.
The girls are beautifully waspish together throughout, capturing the mood and style of the time with great panache:  Jenna Boyd and Tiffany Graves having great fun at each others expense. David Shelley and Rob Whitcomb easily match them as their sparring partners dealing with water, a variety of accents and furniture movement with great aplomb.
And that is the strength of the piece: charm, cleverness, diction and the joy of language delivery evoking a world on the cusp of technical advancement but without the reliance upon it. People talked to each other and told stories rather than soullessly looking at a screen in your hand.
The direction by Ryan McBryde is flawless with every single prop item and cast member movement being used to great effect: the restaurant scene and snow depiction being particular delightful.
This play is perfect for Salisbury Playhouse. It has class, heart and elegance in an entertainment world where such qualities are found sometimes wanting, reflecting values so underplayed elsewhere. A tonic fair way.
The play runs at the Salisbury Playhouse until Saturday 23rd June 2018