For those of us of a certain age, Erich Segal’s novel remains an unforgettable part of our teenage years thanks to the 1970 film adaptation that made household names of Ali MacGraw and Ryan O’Neal. Forty years later, the stage musical premiered at Chichester’s Minerva Theatre, with book and lyrics by Stephen Clark, additional lyrics and (beautiful) music by Howard Goodall. I saw and enjoyed both, so went along to Boscombe’s Shelley Theatre intrigued to see how Theatre 2000 approached it.

The answer is, with simplicity, intimacy and a lightness of touch, all serving the piece well. With no interval, at a very comfortable 80 minutes, judging by the reaction of the first-night audience (about half capacity), it deserves full houses for the rest of its run. In case you aren’t already familiar with the plot (really?), I won’t give too much away – suffice to say that, for me, its dénouement is as moving as Blood Brothers, The Railway Children and Goodnight, Mister Tom!

A simple, somewhat crowded but adaptable set features a table and chairs, double bed, and upstage rostra – while they are there to vary the levels and improve sight-lines, I’m not sure that the raked stage needs all of the latter. A grand piano centre stage reflects the centrality of music within the couple’s relationship. Set and costume rely predominantly – and effectively – on black and white, with selective elements of colour throughout. Apart from one or two dark spots downstage, a microphone for Oliver that seems too resonant compared with all others, and an early imbalance between piano and voices, the unfussy technical design is well executed, supporting the production well. The offstage musical accompaniment – musical director Jo Ellis on piano – richly deserves the acknowledgement given by the cast and audience at the curtain call: it does much to drive a very tuneful show. 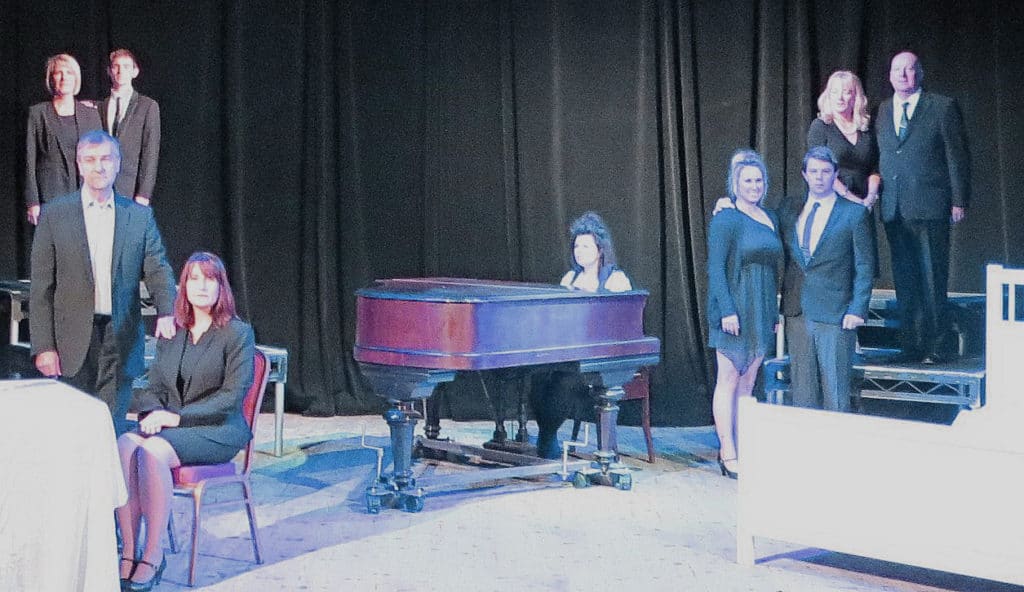 re either or both of the lead characters, so casting is critical to any production’s success. As Oliver, an assured Ollie Slee proves equal to the challenges presented, exuding vocal confidence throughout. Coral Norton’s Jenny is characterised by a delightful presence, in her characterisation and in her singing, with four solos, including my own favourite: ‘Nocturnes’. Her delivery of one particular line is a beautiful example of timing, of how ‘quiet’ can be perfectly audible, and of how sensitively-judged lightness of delivery can be every bit as effective as anything more strident. Although not always convincing in the physicality of their relationship, both young actors richly deserve their particular applause, especially for the musicality of their performances.

Ensemble singing is good, while individual voices are always enjoyable, albeit varying in confidence and consistency, a similar caveat applying to supporting characters’ American accents. In neither case, though, do such variations become overly intrusive. At times, more directorial attention could have been given to the dialogue and interplay between characters; some passages are treated like mere bridges between musical numbers when the dialogue warrants more thought in its own right. Pace is a particularly strong feature of the production, whether within dialogue or in the transitions between scenes, carried out well by members of the cast. Variation in tone is not always as impressive while some of the humour, an important ingredient in the piece, is sacrificed for pace. These reservations, though, while important, should not deter anyone from grabbing a ticket and going along to what is, by turns, a witty, tender and moving production with some genuinely lovely moments.