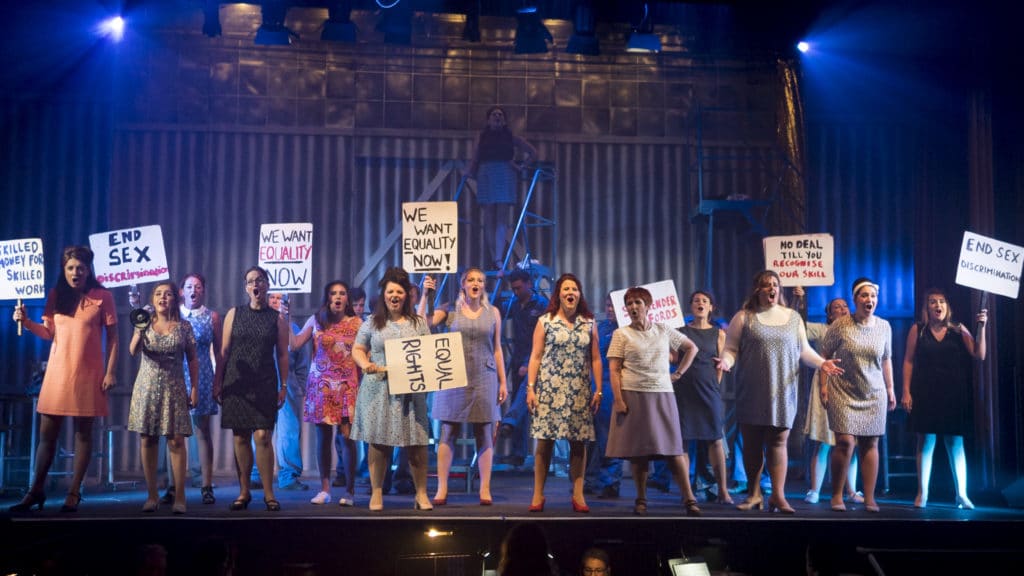 Arriving at the Regent Centre, I was delighted to see an old car, a Ford Cortina of course, delivering the lead characters in the show to the theatre for opening night: Beth Chumley, who played Rita O’Grady,  Daniel Murrell (her husband, Eddie) and their two children, Finlay Wright Stephens as Graham O’Grady and Gabriella Nicol as his sister, Sharon. Highcliffe Charity Players never fail to ensure that the scene is set for the audience from beyond the stage and even beyond the auditorium and foyer, so that we are in no doubt of the society’s intention to embed the era of the show’s setting in the audience’s minds before they are seated. Clever, thoughtful and possibly quite a challenge to organise, it is an endearing and most wonderful touch much appreciated by the watchers I could hear in the pre-show hubbub.

Made in Dagenham tells the heart-warming story of a group of Dagenham female factory workers who made history fighting for women’s rights against the might of Ford. Adapted from the 2010 British film, this uplifting new musical comedy was inspired by true life events: the 1968 women machinists’ strike at the Ford Motor Company’s Dagenham plant in Essex, which would lead to the Equal Pay Act of 1970.

The musical opened at London’s Adelphi Theatre in October 2014 and many of the original strikers attended the first night. Being essentially the story of ordinary people doing extraordinary things, wives and mothers making tough sacrifices and forsaking traditional family roles to win a fair deal, it could not be more topical in today’s climate, with inequality of gender pay making headline news. An excellent show programme includes an outline of the history of the pay gap written by HCP stalwart David Gillard, providing a great background and provenance to the show’s storyline.

The show tells of the struggles of low wages, poor attitudes and inequality, and how it took a strong woman to stand up to the establishment to force change. Beth Chumley as Rita combines the strength and weaknesses of wanting to do right by her children, husband and fellow-workers in this demanding role.

Energy and enthusiasm by the cast is a little inconsistent which might be why on occasion, the clarity of words is lost in the accent, which was apparent in the character of Harold Wilson played by Denis Carlton, losing some great punchlines which the audience failed to pick up on.

However, we would never have imagined that Barry Gray was in his debut role as Mr Hopkins, the factory manager; he surely has been hiding in the wings and with this engaging performance, I have no doubt he will appear on stage again. Yvonne Gray, playing Cass, holds her role consistently and is marvellous, as is Lucy Lamb as Beryl, the sassy worker with an inability to hold her tongue – a firm favourite with the audience. The director, Adam Myers, superbly contains the highs and lows of the production with smaller scenes being performed on the peripheries of the stage and action condensed, allowing the audience to be fully encapsulated in the emotion of that scene.

As always, Stuart Darling as musical director whips the band into a whirling performance, slightly overshadowing the singing on a couple of occasions, but voices on the whole are strong and tuneful, and shining out in the case of Lucy Alner playing Sandra.