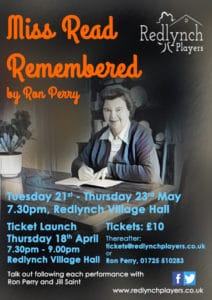 Two years ago, Redlynch Players celebrated their sixtieth anniversary by presenting Thrush Green. Based on the ever-popular books about village life by ‘Miss Read’, it was superbly adapted for the stage by the Players’ vice-chair and long-time stalwart, Ron Perry. Staged in a marquee in a meadow rich in buttercups and with the scent of new-mown hay drifting through the air, it made for a magical evening and was extremely well acted; on a personal note, it remains one of the two or three highlights of the 200-odd productions I have reviewed for this website in its various manifestations.

The Players’ latest production, Miss Read Remembered, was therefore something to look forward to. After an opening song, there is about fifteen minutes of biography of ‘Miss Read’, read by six narrators including Ron Perry and Jill Saint, the daughter of Dora Saint (Miss Read’s real name). This somewhat factual introduction is relieved by some nice touches of humour, a brief dramatization of Dora’s first meeting with her publisher and a rather incongruous invitation to the audience to join in two of the hymns sung at Dora’s memorial service.

This is followed by a potted version of Thrush Green, which reminds one what an excellent script it is. There are some good performances, too, notably from Sarah Newman as the ageing fair-owner, Mrs Curdle; she also plays Dora in the episode with her publisher. However, for versatility, the palm is awarded jointly to Ali Silver for doubling as the redoubtably mannish Ella Bembridge and the juvenile love interest, Molly Piggott, and to Lloyd Perry, who switches from pompous London publisher to Molly’s bucolic boy-friend, Mrs Curdle’s grandson, Ben. Andrew Harrison-King does his best with the part of cantankerous Albert Piggott, and it is not his fault that it needs to be played by someone at least twenty years older.

The evening concludes with a brief account of the original staging of Thrush Green. This mainly consists of complimentary reviews; they may have been – in fact undoubtedly were – deserved, but it ends the show on a regrettable note of self-congratulation.

Assuming that their potential audience is not vast and that many of them are faithful regulars, it seems extraordinary that the Players should offer basically the same play twice in such quick succession. If you did not see it in 2017, I can recommend this production almost without reservation. In the more prosaic surroundings of the village hall, in a cut-down version and with a less inspired cast, it is like eating an originally delicious but now poorly warmed-up dinner.