You have to hand it to the Maskers: they are up for anything, from Kafka’s Metamorphosis to home-grown Mistletoe Junction. The latest production at their tiny studio theatre in Shirley is witness to both their variety of material and their unfailing consistency of commitment.

This production is unashamed Christmas fare. Even the tickets come with the lure of mince pies and mulled wine. Ushers dressed in ’fifties costume show the audience to small tables seating four or so, covered with Christmas paper and gently glowing candles. The auditorium has in fact been transformed in two ways. First, the audience are treated like a cabaret clientele and second, they look directly on to the interior of a railway waiting room, also decorated for Christmas with twinkly lights, ’fifties British Rail posters, a solid fuel stove and even milk churns in a corner.

The plot, such as it is, revolves round the first character waiting for the London train, young Peggy, played charmingly by Bonnie Kaye. She is on her way to town for an audition at the Guildhall School of Music and Drama. She rehearses her first piece, the poem ‘Christmas’ by John Betjeman, unaware that halfway through, Colonel Harvey Mainwaring, played by Philip DeGrouchy, has entered the room. He congratulates her on her recitation but on learning the reason for it, makes another suggestion for an audition piece, in this case, ‘The Three Kings’ by Longfellow, which he recites with classic oratory. 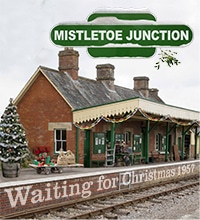 This is the pattern for the rest of the production. One by one, different characters enter the waiting room and either sing or recite numbers from their own repertoire which they think may help Peggy select the best audition piece. There is a minor sub-plot in a delicate undeclared love interest between the Colonel and Celia, a genteel lady played by Jill Desborough, but predominately the plot is a vehicle for a wonderfully eclectic selection of Christmas-related material. In over thirty such numbers, you are bound to have a favourite or two, and probably some discoveries too. There are classics, such as Wind in the Willows and A Christmas Carol, but also some with a bleak reality, such as ‘Unseasonable comment from Mother Christmas’ and ‘We can be film stars’ by Sue Townsend.

’Fifties rock is delivered with real swing and rhythm by Shane (Eric Petterson), on his way with guitar and wife, Gwen (Marie Mc Dade), to a Bill Haley concert. Their teddy boy and girl costumes are spot on. Next are two behatted and gloved ladies on their way to town: Celia, as mentioned, and a piano teacher (Rosa Longman). The fact that a so-called Wurlitzer keyboard is discovered under wraps in the waiting room can only mean that our piano teacher can now accompany any song that is called for. Fortunate!

No waiting room of the ’fifties is complete without a tea lady, of course, and the trolley is wheeled in by Beryl, played by Maire Allen. Last to join in the fun is the stationmaster, Sam (Brian Stansbridge), who just happens to have been the Colonel’s batman in the war – another fortunate event.

By the time the waiting room empties to board the delayed train, all these characters are enjoying each other’s company and each other’s talents. As they leave however and the interval begins, you wonder, munching on your mince pie the while, how the second half can work. Ahh! It wasn’t their train at all. Cue for more numbers, more nostalgia as they pile back in to the waiting room. Now the songs, poems, dramas tumble one after the other, culminating in a selection of seasonal and groan-worthy jokes. Little pretence of following a plot line here but it really doesn’t matter. It comes therefore as little surprise that the evening ends with stage and audience singing together Christmas carols accompanied by the off-stage sound of the Salvation Army. Perfect!

The production is sentimental but that is also its strength. Sometimes the poetry deliveries are rather ‘worthy’ and the singing slightly off-key. Hard to avoid, too, are Joyce Grenfell and Stanley Holloway impressions, but the overall feeling is very strongly goodwill on earth, peace to all men. It is warm, caring and positive and no-one wanted to leave at the end because the world outside the studio seemed far less inviting than that inside. Thank you for the escape, Maskers. And thank you, Brian and Angela Stansbridge , producers and directors, for your wonderful compilation.