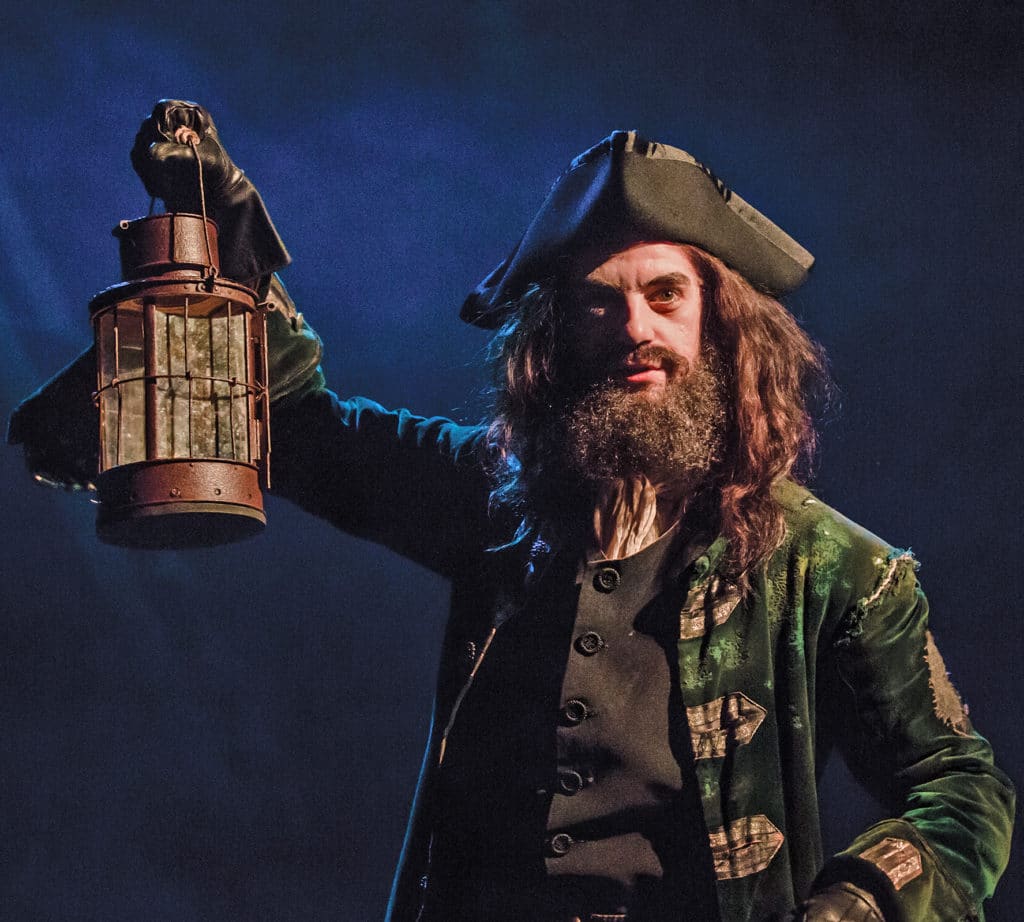 Salisbury Playhouse’s Original Drama programme is always interesting, not least because of its emphasis on work with a West Country connection. Few novels are more firmly rooted in this part of the world than Moonfleet, so a new musical version was a strong candidate for the programme and keeps up the high standards for which it has become known. The book and lyrics are by the Playhouse’s own artistic director, Gareth Machin, who also directs. The music is by Russell Hepplewhite, a young composer with a growing reputation, whose works have been premiered at the Royal Albert Hall, Glyndebourne and Snape Maltings.

The adaptation is true to the basic narrative of J Meade Falkner’s book, the main change being that smuggler Elzevir Block has transitioned into Isabelle. More importantly, it is true to the book’s atmosphere: a mixture of drama, threat, derring-do, suffering and sinister goings on by the light of the shadowy moon. For this designer Tom Rogers must take a share of credit: the set looms almost menacingly over the stage but is flexible and leaves plenty of room for the action on a large centre space. Almost as much credit goes to lighting designer Tim Lutkin, who creates pools of light for the action while other areas are being cleared (so keeping up an admirable pace) and also uses horizontal beams surprisingly effectively. All the technical aspects come together for a terrific representation of a storm at sea in act 2.

Moonfleet is usually classified as a smuggling story, but actually the smuggling is confined to the first half. Almost as important are the themes of the supernatural, a teenage boy rebelling against his background – ‘I want adventure’ – and the class divisions which led to the poverty which in turn made smuggling such an important source of revenue for the fishermen and peasants of the Dorset coastline. One of the most important and praiseworthy things about the adaptation is that it does not neglect these aspects of the book.

Ryan Heenan shows considerable promise as the young hero, John Trenchard, and, like all the cast, keeps up a Dorset accent well. Simon Butteriss is nothing if not versatile: he plays the anguished village priest who is a member of the Establishment but sympathises with the smugglers’ needs, then contributes to the comedy and drama of the auction scene as the bailiff, before having a camp ball as the crooked diamond dealer, Aldobrand. Earl Carpenter brings all his considerable authority to the magistrate, Maskew – appropriately, in view of Earl’s Les Misérables connection, a Janvin-like figure.  Rebecca Lock is a vigorous and passionate Isabelle and has two big numbers that she belts out; it’s a generational thing, but I found her voice more effective in the quieter, subtler passages. Perhaps the highlight of the evening is the singing of Ashley Mercer, playing Blackbeard. His background is primarily in opera and although he is surrounded by excellent singers, the quality of his voice is outstanding.

For every musical that becomes a classic, many more disappear into oblivion. I don’t see Moonfleet becoming a classic, but nor does it deserve to fall by the wayside. There are many good things about it which make it well worth catching during the rest of its run: until 5 May at 7.30 each evening, with matinées on Thursdays and Saturdays at 2.15.