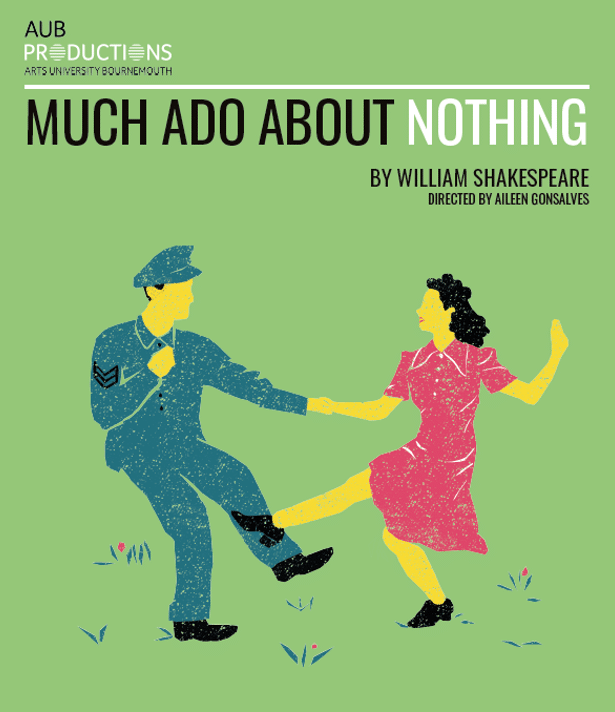 When Shakespeare’s plays are classified, Much Ado is generally listed as a comedy, but it is arguably more accurate to call it one of his ‘problem plays’. The reason is that while it is for the most part light-hearted, there are elements of tension and darkness that do not sit altogether comfortably in a comedy. For motiveless malice, Don John is second only to Iago among Shakespeare’s better-known villains, while Beatrice’s instruction to Benedick, ‘Kill Claudio’, comes like a faceful of ice-cold water in the midst of the couple’s sparring.

Is this contrast a weakness in the play, or was Shakespeare reminding us that in real life, the line between comedy and tragedy is a thin one and easily crossed? Whichever, it makes it a challenging play to perform, but the enthusiasm of the student cast of this production helps them to rise above the difficulties. The premise is that it is 1945 and Bournemouth Women’s Institute are staging the play, performed by an all-female cast and set in what was to them the present day. Add to that some major cutting of the text so that the whole thing lasts barely 90 minutes, and we are a long way from a traditional staging. A purist might say that there are just too many liberties being taken, but they create a production which is always interesting.

Catarina Da Silva plays Benedick with more broad comedy than is usual. Fortunately, she is a gifted comedian, with excellent timing, facial expressions and body language. However, she is equally good in the deadly serious scene where she tells Claudio exactly what she thinks of his apparent betrayal of Hero. Julia Wilczewska also captures the contrasting moods of the piece: she makes the lovesick Claudio very likeable, but forcefully conveys her hurt and anger when she thinks that Hero has been unfaithful. Jessica Betteridge shows Hero as a charming character who is much in love, but her performance deepens in the face of Claudio’s rejection.

Marta Fossati has considerable stage presence as Beatrice. Her sophisticated and sharp delivery of the repartee with Benedick contrasts with the latter’s broader approach. Ellie Wasylocha makes an authoritative Don Pedro, while Jade Sheridan is a suitably villainous Don John. There is a lot of doubling up of parts, calling for some impressively quick changes. Georgia Melton plays both Margaret and Dogberry; the former is rather a thankless part, but she makes the most of Dogberry as the fool of the piece. Mention should be made of Rose Fox in the comparatively small part of Borachio: she has a feeling for the verse and an admirably clear delivery.

Do all those liberties work? The playing with genders is no bother; trouble is taken before the play proper begins to emphasise that this is a WI production, which helps to make it all more believable. As for forcing a play into a period other than that in which the playwright set it, this is is justifiable only if it in some way illuminates the work: for example, a Twelfth Night set in the Jazz Age or Coriolanus as a modern Army commander. In Shakespeare’s original, a war has just ended, so it makes perfect sense to modern audiences if it is set it in 1945. During wartime, normal standards of ethics and behaviour are blurred – who knows what horrors Don John experienced in the desert or Normandy to make him the way he is? As for the textual cuts, it is a very wordy play and this abridged version works surprisingly well.