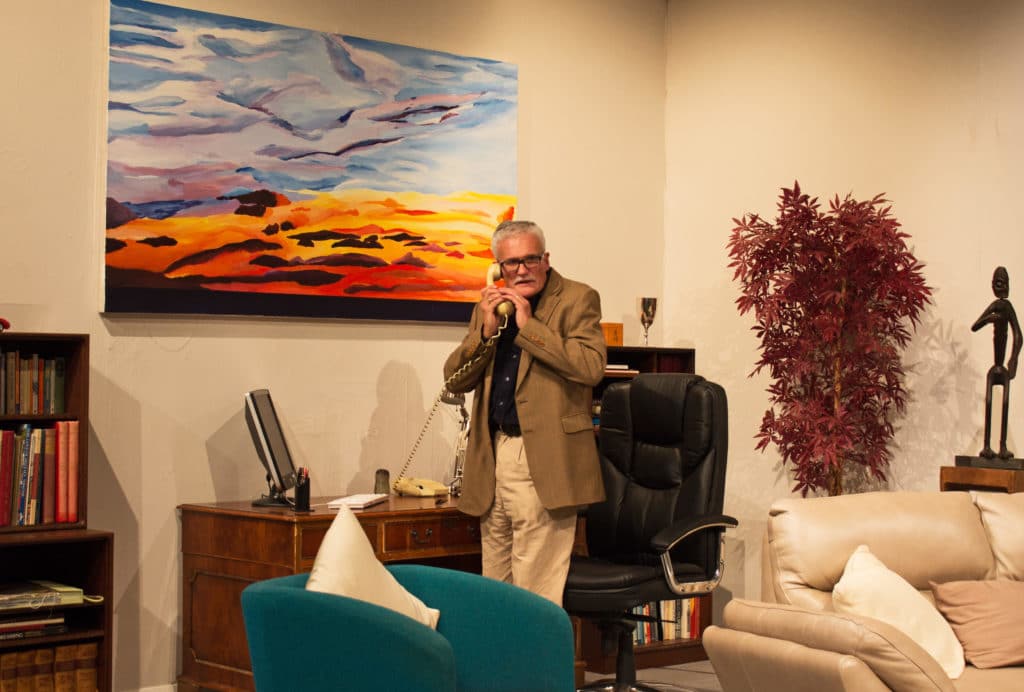 As NFP are one of the New Forest’s leading amateur drama groups (now in their 88th year!), an entertaining night is always guaranteed when I am fortunate enough to be asked to review one of their shows and Murder by Misadventure did not disappoint. A fabulous mix of intrigue, tension, comedic moments and some wonderfully ‘quotable’ phrases resulted in a great whodunnit which kept everyone guessing till the very end.

A quick synopsis will not give anything away. Scriptwriters Harry Kent (David Luker) and Paul Rigg (Alan Whitty) have won numerous awards, but while Harry has saved and invested his earnings and now lives with his wife Emma (Liz Lock) in a sun-drenched luxury flat high above the Sussex coast, Paul has wasted his money on booze and birds and lives in constant fear of his bookies’ heavies. Harry wants to break up the partnership that Paul views as a lifeline, but Paul knows a sinister secret from Harry’s past. Murder seems like the only escape – a murder much like ‘the perfect crime’  they have just plotted for their latest script….

David Luker and Alan Whitty play their characters so well as their partnership moves back and forth between rubbing along and considering murder, with the female angle interjected by Liz Lock causing belief and incredulity like a swinging pendulum. Which way will the plot go? You’ll have to go and see!

As always, the set was flawless in its detail and elaborate within the story. Congratulations to Robin Ede for his skilful direction, and all those involved with the NFP. Do go along and support this wonderful society as they deserve much larger audiences than they attracted last night.