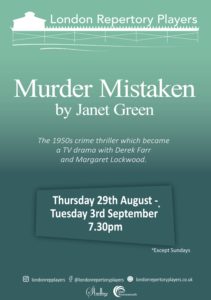 London Repertory Players’ 2019 summer season at Boscombe’s Shelley Theatre closes with a play that is new to me by a writer also new to me. Janet Green’s Murder Mistaken was written and first performed in 1952 and is ideally suited to the repertoire of a company that gives us a taste of the days of much-missed weekly rep. LRP’s seasons have now reintroduced to Bournemouth the sort of productions that used to inhabit the lost Palace Court Theatre or tour to the Pavilion Theatre during the 1950s (and maybe earlier but my parents’ programmes cover only that decade). Emma Jeans’ set atmospherically takes us back to the hilltop house in 1950s’ Kent owned by Monica Bare and her younger husband, Edward. Their marriage, we learn, brought an end to her loneliness while offering Edward the opportunity to find what he has been looking for. (I’m treading carefully here!) The play’s title gives a pretty good idea of what is to follow.

In the central role of Edward Bare, Mitch Capaldi is immensely enjoyable. He ensures that the young and ambitious husband’s Uriah Heap-ish qualities are present throughout without ever being overplayed or stretching the plausibility of his relationships with other characters. It is a gift of a part but Capaldi inhabits the role with absolute conviction and keeps the play’s momentum from ever faltering. Physically, verbally and in his overall characterisation, his is one of the most enjoyable individual performances I’ve seen over three seasons of LRP productions.

As his wife, Monica, Margaret McEwan suggests the age difference quite well and plays her part in establishing the nature of the couple’s relationship. The thinly disguised Tar Meg Crewman (one for cryptic crossword fans) is even more successful, later as Charlotte Young, the stranger whose car breaks down outside the couple’s house. Hers is a nicely judged performance, key to the effectiveness of the final two of the play’s six scenes. Far more difficult is Hephzibah Roe’s role as the elderly, handicapped servant, Emmie: sometimes ensemble restrictions make for uneasy casting decisions – but, between them, she and Capaldi have ensured that I’ll never again be able to hear the word “toddle” without flashbacks.

As Philip Mortimer, variously Monica’s loyal family solicitor, Edward’s verbal sparring partner and, later, potential source of revelation, Neil James brings a quiet authority and a confidence, which, matched with his strong physical presence, provide an excellent foil and contrast to Edward. Victoria Porter as Freda Jefferies adds a great deal more to the production’s overall success. As the widowed former pub landlady, she combines brassy, worldly-wise and shrewd to provide a terrific foil to Mitch Capaldi. The scenes between them vary in mood from the playfully and none-too-subtly “interested” through their chess match of a liaison and on, via various twists in which Charlotte is also involved, to the intense finale. Throughout, they are absorbing and keep the audience intrigued as to where everything is leading.

Despite early competition from what must be the most voluble participant(s) in Bournemouth’s Air Show, some serial coughing and a burst of what sounded like someone on the back row of the auditorium playing skittles with their plastic drinks’ glasses, along with one or two ‘props moments’, the performance was, deservedly, well-received by a good-sized audience. There are certainly amateur theatre groups in the area that offer a similar standard of theatre, the boundary between the two categories being more of a grey area than a clear line, but it is greatly to their credit that London Repertory Players have, since 2017, added appreciably to and extended the range of what is on offer in the area. It is well worth taking the opportunity to go along to one of the three remaining performances, at 7.30pm on Saturday 31 August, Monday 2 September and Tuesday 3 September. Keep an eye out too for next year’s promised season of five more productions.