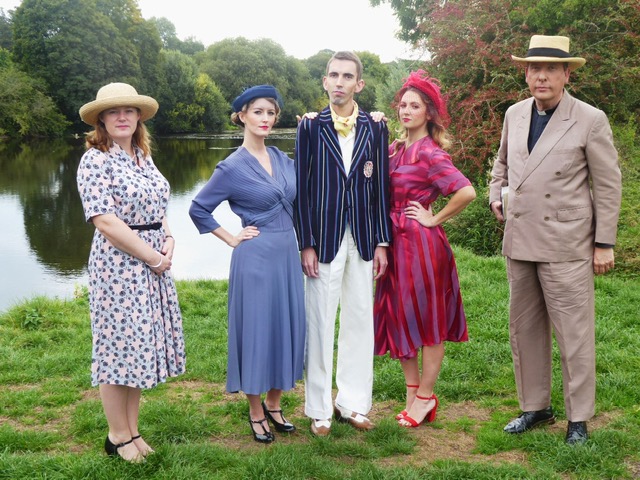 Murder on the Nile is Agatha Christie’s own, 1944, stage adaptation of her novel, Death on the Nile.  The novel, as well as subsequent adaptations for film and TV, features Hercule Poirot but the stage adaptation gives the detective skills to the lesser-known Canon Ambrose Pennefather – ably played in this Wimborne Drama production by Tony Parkinson.  The plot remains recognisable, but with subtle differences.  It is not a play for the those of a nervous disposition; there are a number of loud gunshots and the ultimate body count is worthy of a church fête in Midsomer.  There is, however, still plenty of light-hearted humour.
The film and television dramas feature dramatic vistas of the Nile, complete with pyramids, hippopotami and crocodiles, but the limitations of the stage mean that the action takes place entirely within the observation saloon of the paddle steamer – with noises off and an impressive backdrop of the statues at Abu Simbel visible through the observation windows.
First-timer, Richard Scotson, amuses as a native beadseller while the various characters are introduced and he reappears later as the Ship’s Master.  Judy Garrett plays a suitably self-centred and snobbish great-aunt, Miss Ffoliot-ffoulkes, while Boo Feltham is very convincing in the part of the put-upon niece, Christina Grant.  Sam Moulton is excellent, as always, in the part of Dr. Bessner – featuring a convincing low-countries accent, but I am not quite sure about the rôle of Smith, played by James Bourner.  Calum Hearne plays a good supporting part as the padddle-steamer’s steward – hurrying on at every cry of “Boy!”.  He also affects a vaguely foreign accent, though some of his dialogue seems rushed and is not always audible.  John Sivewright and Kristy Dixon are well paired as the recently married Simon and Kay Mostyn, though John/Simon’s make-up, presumably supposed to represent a beard shadow, makes him look as though his face has been quite severely bruised.
Kimberley Scott conveys the bitterness and malice of the jilted ex-fiancée, Jacqueline de Severac, very well to some fine reactions from Christina (Boo Feltham) to whom she drunkenly tells her story of rejection and betrayal.  Michelle Barter speaks French well as Kay Mostyn’s French maid, Louise, though I wondered why, as a lady’s maid, she wears bright pink nails.
In tonight’s performance there were some inexplicably long delays, during which curtains closed or lights went out and the audience talked amongst themselves.  Similarly there was a rather confusing sequence in which great-aunt Ffoliot-ffoulkes (Judy Garrett) came on, uttered some lines, and was then ushered off by Canon Pennefather (Tony Parkinson) – only to reappear with the same lines a few seconds later – a mystery which I doubt was intended by Dame Agatha.  Maybe there were technical problems which weren’t obvious and, this being opening night, hopefully these will be resolved in later performances.
The dénouement was smoothly deliberated by Tony Parkinson, as Pennefather, (even though his dog-collar was slipping).  John Sivewright looked rather better with the feverish red make-up on top of the bruises noted earlier and the play came to a successful, if tragic, conclusion.   It was well received by a capacity opening-night audience.  Well done to all.
It runs until Saturday and is well worth seeing – even if you think you know whodunnit.