You have to credit Milton Musical Society’s business nous: this year they have followed up two of the dozen sure-fire certainties to put bums on seats – Fiddler and Oklahoma! – with a third, My Fair Lady, to mark their 50th anniversary. The all-but-sold-out Regent Centre on the opening night confirmed the commercial wisdom of the choice. Which is all very well, but quite irrelevant if the production itself is not of a standard to please the audience and bring them back for more. Happily, the first-night audience’s reaction suggests that this production not only reaches that standard but exceeds it by a country mile. Shaw filled Pygmalion, on which the musical is based, with humour, pathos, clever characterisation, moral questioning and social comment, and all of these are fully brought out. There are three outstanding acting performances, three unforgettable moments and the music is well performed – no wonder the reception was so enthusiastic. 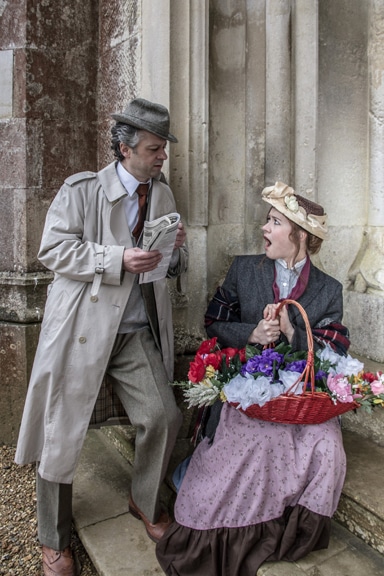 My Fair Lady can only work if a first-class actress is playing Eliza, and Amy McIntosh is exactly that. The first unforgettable moment, impressive and moving, comes soon after she arrives at Higgins’s house, when she is standing a few steps up the stairs while Higgins is dictating the terms on which she may stay: a small, almost fragile figure, but exuding defiance and determination. To convey that in a brief tableau shows how she inhabits the part. Amy plays the role with huge energy but knows the virtue of stillness, of pauses and of vocal modulation. She has a very serviceable singing voice but is more of an actor than a singer: in the programme she lists only her (considerable) achievements in musical theatre, but I would be intrigued to see her in a demanding part in a straight play.

My Fair Lady can only work if a first-class actor is playing Higgins, and Alex Cook is exactly that. Sorry about the déjà vu, but the play depends equally on the two parts like a bicycle depends on two wheels. Higgins suits Alex better than Curly in Oklahoma! did last year and he gives a profoundly thoughtful interpretation. Largely shunning Rex Harrison’s talking to music, he reminds us that Lerner and Loewe wrote some good tunes that are almost unknown to owners of the original cast LP. He quickly establishes Higgins as a man untroubled by self-doubt: thick-skinned, single-minded, arrogant and in many ways insufferable. Only at the very end does this mask slip, and it is thanks to Alex’s skilful playing of those vital last ten minutes that we believe in and sympathise with his sudden vulnerability.

Dennis Osment as Colonel Pickering must take some of the credit for the chemistry that exists between himself and the two principals as the painful business of training Eliza in act 1 builds up to memorable moment no. 2: when Eliza first falters out ‘The rain in Spain stays mainly in the plain’. The hairs on the back of my neck were sticking out at right-angles. It was a rare blot on the production that on opening night anyway, Dennis’s knowledge of his lines was sometimes uncertain and led to a drop in the pace.

Put two actors of the calibre of Amy and Alex together and there are some sizzlingly effective scenes, none better than the one after the ball: memorable moment no. 3. Amy has just had the difficult job of standing downstage for a long time, not saying a word, but conveying only through facial expressions her distress as Higgins compliments everyone but her. When she tries to explain why she is so upset at the situation she finds herself in – between two worlds but belonging to neither of them – Higgins genuinely can’t understand, but his loss of temper shows that he is dimly aware that he is in danger of losing something precious to him.

The third outstanding performance comes from Mark Ward as Alfred Doolittle. He lights up the stage when he is on through his sheer happiness, a happiness that comes from self-confidence – did Shaw intend us to contrast this uncomplicated quality in him with Higgins’s arrogance? Certainly the meeting of the two is a duel of Titans from opposite sides of the track, and I have never heard Doolittle’s speech on how the undeserving poor can’t afford morals better done.

There is a lovely comic cameo from Beverley Harris as Mrs Higgins, while Adam Davis looks suitably man-about-town and sings well as Freddy Eynsford-Hill. The chorus interprets Stephanie Constantine-Smith’s simple but serviceable choreography enthusiastically, especially in ‘I’m getting married in the morning’, but by contrast with the permanently miked-up principals, their tuneful vocal contributions sound a little thin.

My Fair Lady is a big, complicated show (a member of the chorus can have as many as eight costume changes), and credit both to director John Teather for holding it together and to the stage crew for the slick scene changes. There are some sumptuous costumes, too, Eliza’s Ascot outfit drawing a gasp from the audience.

If I have heard a better first-night orchestra at an amateur production, I can’t remember it. The standard of the musicality in this production matches that of the acting, a considerable compliment for which musical director Lee Marchant deserves huge credit.

A minor criticism is that the curtain call seems protracted and complicated for a show that is already very long, and the final pose suggests a failure to understand Eliza’s thinking. Overall, though, this is a truly memorable theatrical experience. It runs till 21 April at 7.30, with a 2.30 matinée on 21 April. Don’t miss it!