John Steinbeck’s Of Mice and Men is often considered to be one of the most iconic and challenging stories in American history. When you have a play that includes themes of racism, sexism, disability, social inequalities and death, all within a short period, then it becomes very clear why it remains on the school curriculum. It was Walt Disney who said, ‘All our dreams can come true, if we have the courage to pursue them.’ This was at a similar time to when Steinbeck wrote this play, and it is the concept of man’s dreams that is at the very core of his work. 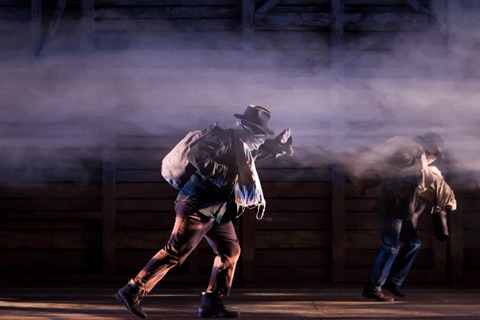 The two central characters, George and Lennie, are two migrant workers who dream of owning their own ranch. The play then explores their relationship, and the dreams of the other characters they interact with, as they seek work to earn the capital to help achieve their dream.

George Milton is played by Richard Keightley, whose depth of performance is superb: able to show both the frustrated yet determined, the caring yet angry, and the upset yet compassionate. His portrayal is second only to that of his co-star, Lennie, played by Matthew Wynn.  The character of Lennie is written as a disabled giant – a man of incredible power yet child-like quality, and any actor who takes on such a role clearly has a task to depict the character sympathetically without overstepping the line towards offence. Matthew is first-class. His representation of Lennie’s mannerisms is entirely believable and the audience can’t help but feel for him as the play develops and explores his simple desires.

The other cast give equally impressive performances, with highlights coming from Andrew Boyer as Candy, the crippled, ageing workhand who struggles with the idea of being alone after his dog is killed, and Kamran Darabi Ford as Curley, the arrogant son of the boss of the ranch.

David Woodhead’s set design is on view the whole time, yet it is only as the play progresses that you really get to see the versatility, yet simplicity, of the wooden barn box set. My only disappointment was that the barn reaches 20 feet in the air, and yet the whole action is played at ground level, rendering most of the set as unused.

Bretta Gerecke’s lighting is simple and effective, particularly at the very start, with light streamed across the stage as the actors enter as if walking into the dust storms typical of the time and place.

The overall direction, by Guy Unsworth, movement by Sinéad O’Keefe, and fight scene by Marcello Marascalchi, keep the play moving seamlessly, without ever getting stale, and there are some very touching moments, particularly with the naïvety and child-like spirit of Lennie.

This is a show that is outstanding with the level of detail that has gone in to the production – lighting and sound effects timed to perfection, as well as the faultlessness of the characterisations. For me, Candy’s dog topped the list.

Sadly, this isn’t a story with a happy ending, with the exploration of the characters’ dreams crashing around them. But the themes explored are still very relevant to today, and this is one production that deals with them brilliantly.