When I realised that this show was about a game of cricket, I was a bit worried that it was not going to be for me, as I know very little about cricket. Just in case you might be under the same delusion, let me assure you that the game of cricket is largely incidental to this comedy about the inter-personal relationships of five members of cricket team and their wives, ex-wives and girlfriends. It probably helps to understand some of the humour if you do come from a cricket-playing nation – but I imagine that most of the Barrington audience will fall into that classification (American visitors should watch and learn).

We are presented with a simple, static set representing a cricket pavilion clubhouse, complete with bar and a cricket scoreboard, and a well-rehearsed cast of experienced players who make the most of this script by Richard Harris. Here and there the origins in the 1970s are evident, but the marital problems, the relationship tensions and the comedy are timeless. 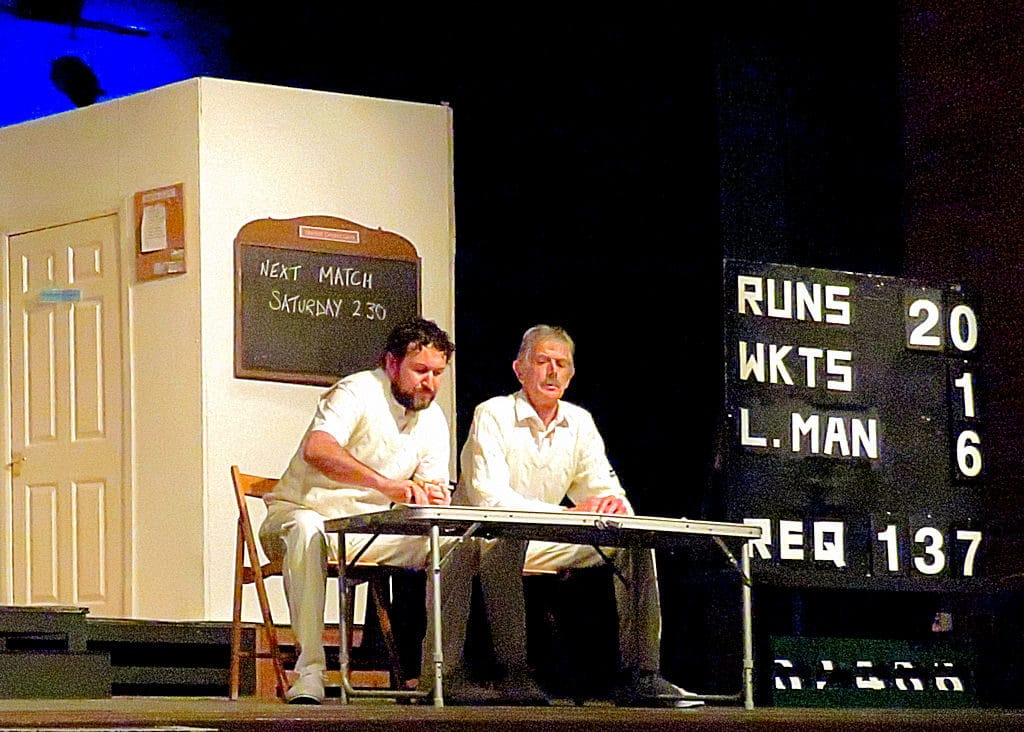 The auditorium features as the cricket pitch, with the match taking place behind us (courtesy of a pair of speakers under a chair at the back of the theatre) and the flow up and down the steps from the ‘pavilion’ (stage) onto the ‘pitch’ (auditorium) makes for a nice image of a much larger space.

There is no amplification that I could discern, but the performers project well and even the lines delivered from the off-stage kitchen are perfectly audible.

I noted just a few good lines (but there are many more). Maggie (Dawn Hollington): ‘Toast, marmalade and sex – they’re the only things I’m any good at.’ Bob (Paul Marcus): ‘Underneath that insensitive exterior, you’re really quite insensitive.’ Alex (Pierce Arkless): not a line but a stage fall, backwards. Miriam (Rebecca Christie): not a line but angry dart-throwing.

The languid delivery of lines from Ginnie (Chris Hughes) contrasts impressively with the sometimes frenzied dialogue of the cricketers. That’s not a criticism of the cricketers – it was the contrast that I liked. Kristy Dixon’s small part as the brainless bimbo, Sharon, in this production relies on very few words and a lot of anguished expression, and is well executed.

The rest of the cast, including Ryan Gregg as Roger, Richard Harker as Dennis and Michael Tong as Kevin, do well to keep the show moving along, with the fictional game happening behind us. I said at the start that I know little about cricket – but keeping those numbers moving on the cricket scoreboard is a significant part of the action. I’m sure it all means something (probably not to an American), but 999 seems an improbable cricket score.