In a couple of places, I have seen Over My Dead Body described as ‘thin’. I’m not sure what those critics expected of the play: it is a light comedy – almost a farce, but without the slapstick and falling trousers – and does not claim to be anything else, but it is more skilfully plotted and more elegantly written than many. 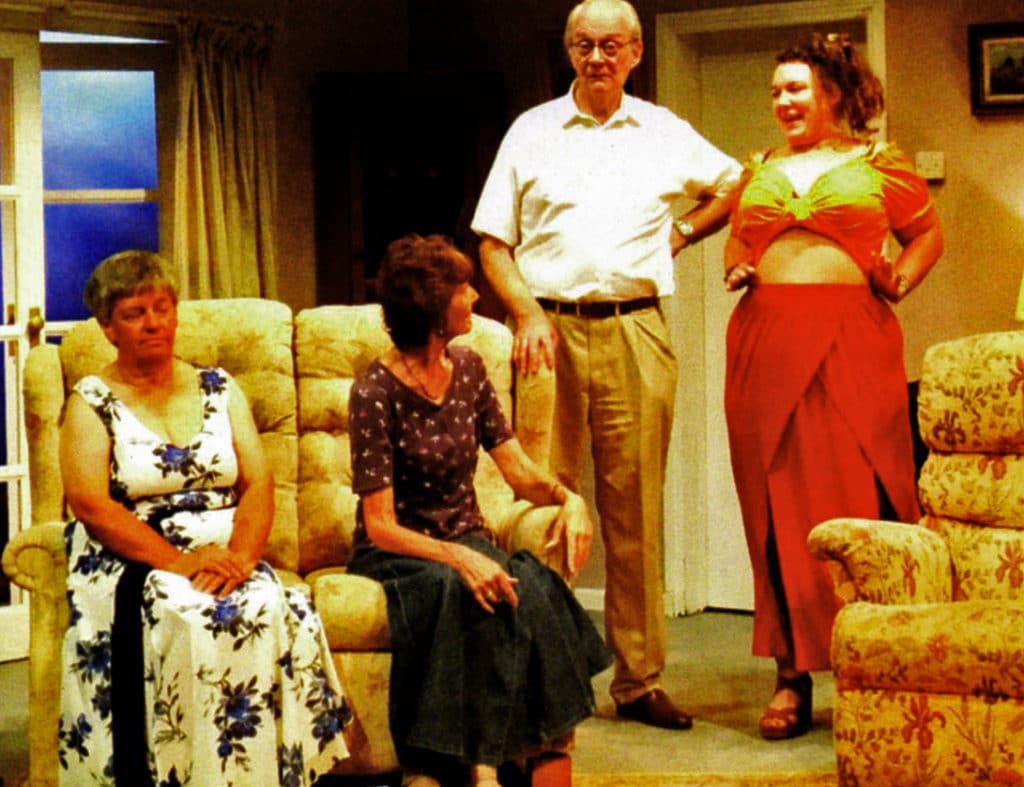 The start of a new season at Bournemouth Little Theatre Club has been marked with a facelift for the theatre, with the bright and comfortable new furniture in the newly painted bar the first phase. The cast, on the other hand, are mostly familiar faces: although this six-hander does introduce one newcomer, the other five parts are played by some of the most experienced, reliable actors around, and this shines through in the quality of their performances.

Gerald has been recently widowed, but his late wife has made arrangements for him of which he was unaware, and his efforts to get out of them are the source of most of the comedy. Jeremy Austin gives an intentionally laid-back and low-key interpretation of the part: he is the long-suffering, still centre around which the action revolves. He also has some of the best jokes, which he delivers with dry wit, but at times they are lost because his delivery is so quiet and laid-back that his voice does not project to the back of the theatre – not a problem I thought I would ever have cause to mention in an auditorium the size of the Little Theatre.

There is an unobtrusive but very effective performance by Mary Almeida as Shirley, Gerald’s daughter, and this rubs off on Alan Dester, who plays Mark, her well-meaning but unimaginative husband and Gerald’s main ally: he has sometimes had a tendency to exaggerate his body language and facial expressions, but here he is very restrained and much more convincing as a result.

Shirley and Mark want Gerald to go and live with them, which seems like an attractive proposition when his sister-in-law, Amanda, arrives and announces that she is moving in permanently. Gill Linford, after years of playing small supporting roles, gets a deserved crack at a major part and makes a very good job of it. Her Amanda is formidable and organising, with a cast-iron certainty that her opinion is correct and a nice line in outrage towards anyone who disagrees with it.

We have to see Isobel, best friend of Gerald’s late wife, as a potential femme fatale, but as the story develops, we realise that under a spunky exterior, she is much more vulnerable and complicated than that. Veronica Ryder brings out all the nuances of the character with great assurance.

The newcomer to the cast is Daisy Linsson, who plays Carol, Gerald’s cleaning lady, with great pizazz – she has no time for the icily polite behaviour of the middle class towards those they loathe, and her entrance ratchets up the already rapid pace a notch.

The piece requires only a simple, small-scale set, which suits the Little Theatre stage perfectly. Director Don Gent has a deft touch: a two-seater sofa downstage, facing the audience, could be a death-trap, but he uses it naturally while ensuring that none of the characters lingers too long on it. The exception is when it becomes the battlefield for an extensive verbal skirmish between Isobel and Amanda which is one of the highlights of the piece.

This is a polished performance of a witty and enjoyable play – catch it if you can at 7.45 each evening until and including 8 September.