Sir Walter Elliot demands nothing less than advantageous marriages for his three daughters, actively disapproving of and dissuading any liaison that he deems ‘beneath their stations’; as a result, Anne chooses to refuse the love of her life, a poor naval officer, Frederick Wentworth. Seven years later, the family now plunged into debt through her father’s arrogance, the family home is rented out and Walter Elliot relocates to Bath with Anne’s sister, Elizabeth. Anne, reluctant to spend the winter in Bath, opts to visit her other (married) sister, Mary, where she meets again her lost but not forgotten love. Will she gain a second chance of love and happiness, or has she missed her opportunity?

There is an inextricable link between Jane Austen and Hampshire: she was born in Steventon, lived in Southampton and Chawton, and died and was buried in Winchester. Chesil Theatre have perfectly timed their production of Austen’s Persuasion, her last completed novel (adapted by Mark Healy), to coincide with the bicentenary of her death, the date falling during their run. This particular adaptation deftly reflects the poignancy of Austen’s final months and possible reflections of her own life and failed romances alongside the lives and loves of the characters, as fact merges with fiction and a large dose of supposition. The greatest challenge for the cast is that all eighteen characters are portrayed by just seven actors, but it is a challenge that they are more than able to meet, as for the most part they do a fantastic job of capturing the very different personalities and characters. 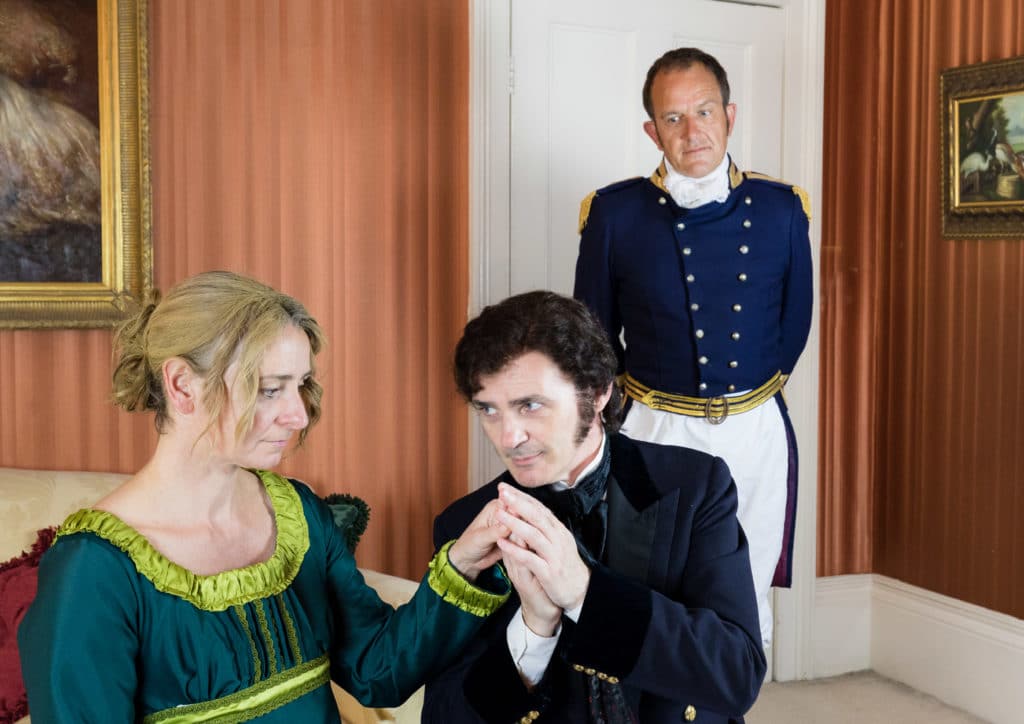 Helen Symes is captivating as Austen/Anne Elliot. Her focus and the ease with which she changes from the fictitious heroine of the novel to the actual author is impressive; her narrative skills in her monologues to the audience or in relating Austen’s letters to her sister are colourful, sympathetic and enthralling.

Malcolm Brown and Christina Pye are fabulous together as Walter and Elizabeth. With their haughty affectations as they aspire to nobility, putting on airs and graces that their financial situation really doesn’t merit, they mirror one another in a lot of their body language, as daughter follows father’s lead. Their superior accents set the tone of their condescending attitude to those they feel are beneath them. They shift between these pompous characters and their other roles with ease, whether in gestures, mannerisms or vocal ability; it is not just the costume changes that depict the change of personnel they portray. Brown’s voice as the Admiral has a majestic quality.

Norma York puts in a sterling cameo performance as the redoubtable dowager, Lady Russell. It is easy to understand the sway that she exerts over Anne and her family and the role that she plays in their lives. Marcus Whitfield is also very convincing and credible in his numerous roles, bringing honour, vulnerability and charm to his portrayal of Anne’s lost love.

The Chesil Theatre building is a very intimate and compact venue, with technical and logistical restrictions from a lighting perspective, but there are some good focused spots that help demarcate areas and some good atmospheric lighting states. The set is essentially a bare grey stone-washed box, but good use is made of the different levels; although the set lacks a critical attention to detail in its finishing, the meticulous minimal props and set dressing make up for this (handwritten letters and music, for example) and are used to very good effect. The projected images are excellent at setting the locations for individual scenes, although the pivotal moment at Lyme Regis seems crass and out of place for the tone of the incident – I won’t expand as it involves spoilers! The costumes are splendid, evocative of the Georgian/Regency period, with rapid costume changes and shrewd use of accessories helping with the transition between characters, although more care is required to avoid hats causing dark shadows over faces at times.

Essentially, diction is excellent. There is naturalistic staging so that sometimes the characters have their backs to the audience, but projection and enunciation ensure that every word is heard with great clarity. There were a few opening night hesitations, but it is to the cast’s credit that they are all secure enough in their numerous roles and dialogue that they were able to recover from any stumbles without greatly affecting the flow and pace of the production, and I am confident that they will go from strength to strength over the remaining performances.