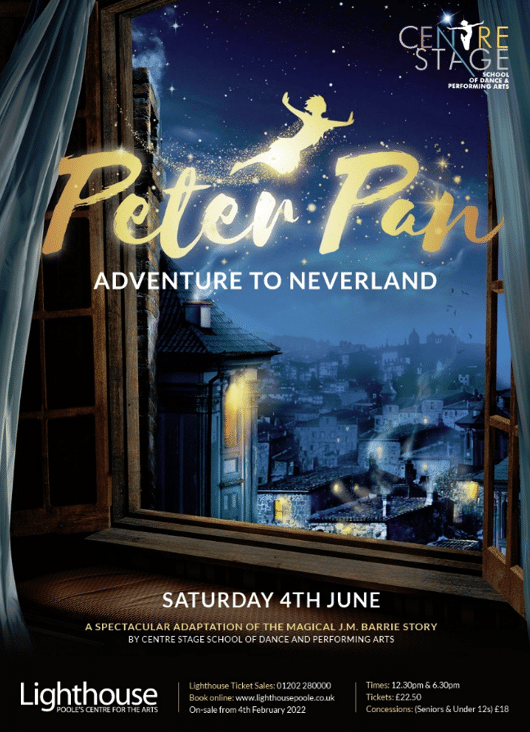 Wow! What a magical adventure ride!

If you think school productions are only for doting parents and grandparents, think again! The Centre Stage School of Dance & Performing Arts have elevated youth productions to a whole new level with a wonderful adaptation of JM Barrie’s enduring and much-loved classic tale.

The original story of Peter Pan, the Darling children and the villainous Captain Hook is so well known it needs no explanation. This adaptation had all the timeless aspects of the original, while expanding on the nursery toys and creatures who inhabit Neverland’s mystical world.

There are two distinct components of Peter Pan: Adventure To Neverland – the inspiring adults who behind the scenes put together the creative and technical aspects, and the amazing onstage performances from these brilliantly capable students.

Without the vision of Artistic Director Miss Zoë Mather and the support of her superb creative team, there would have been no enchanting voyage to Neverland to enjoy – but it’s the commitment, discipline and teamwork of the talented (predominantly female) students who brought the concept to life in such an enchanting way.

Among the principal roles, the trio of Peter Pan, Wendy and Tinkerbell will remain with me for a long time. Charlie Delstanche (the personification of Peter Pan), Eve Tucker (endearing as warm and loving Wendy) and Abigail Grindey (with wonderful characterisation as sassy and hot-tempered Tinkerbell) are a genuine ‘triple threat’ with excellence in dancing, acting and singing. Whatever their plans for future careers, they are born to perform at the highest level! Not only did they have amazing stage presence in principal roles, but they also blended into smaller group performances as pirates, planets, spirits or dolphins.

They weren’t alone in giving performances of the highest quality. However, with a cast of 350 students (aged from 2 to 17 years old), it’s impossible to pick out and name individual performances amongst the largely uncredited cast list, so forgive me for not highlighting each and every one and my apologies for any group I’ve inadvertently missed out!

With such a wide age range, it’s inevitable that some performers will be technically more advanced and accomplished than others, but the outstanding choreography enabled them all to perform to their best, while they all brought a joie de vivre to the production which left me smiling (and a little emotional at times!) throughout. Each cast member, from the tiniest teddy bear to the most glorious heavenly planet, knew exactly where they should be, what was expected of them, and looked completely at home on the Lighthouse Poole stage, filling the stage with passion, enthusiasm, proficiency and high quality narrative skills, culminating in the most compelling battle.

Music, singing and drama were all well represented as means of storytelling (incidentally, the students made it look deceptively simple when delivering dialogue to pre-recorded music – trust me, it isn’t!); however, as the school’s name suggests, there was a larger emphasis on dance than the other genres. While I may not know a pas de basque from a pas de chat (I doubt many of the audience would either!), I loved the way the style of choreography was perfectly devised to suit each of the numerous characters while also showcasing each student to the best of their current capabilities.

The students may have been prevented by Health & Safety regulations from actually ‘flying’ on stage, but their acrobatic skills, staged combat and contact dance movements more than made up for this. They made great use of the entire stage area, no mean feat when moving from a smaller rehearsal space to a full size professional stage.

From toy teddies, clowns, Zoo animals and dancing puppets who came to life in the nursery, via the moon, shooting stars and planets, to Neverland’s resident Lost Children, Pirates, Indians, the welcoming parrots, fireflies, elves and gnomes, swimming dolphins, mermaids, flamingos, ravens, dragons, spiders, snakes… all were beautifully brought to life and there were so many wonderful little details that were such a delight to watch.

Do the Arts matter? Absolutely, YES! It’s not just stagecraft skills that students can learn, but also the many life skills that they can gain and take with them into the outside world: teamwork, supporting each other, discipline, dedication, diligence and resilience. All were demonstrated throughout the performance, be it the hours of rehearsals and hard work before the show, the older students helping the youngest ones throughout the show (whether deliberately choreographed into the dance numbers or being alert to their needs during the curtain call), or dealing with any slight stumble or wardrobe misfunction with a professionalism that wouldn’t be out of place on the West End.

Special mention should be made of the courageous way the tiny skeletons took a power cut in their stride, brushing it aside as if it were an irritating gnat, and getting straight back into their routine as if nothing untoward had occurred!

At over 3 hours, it was a long show – but the energy, focus and commitment throughout never wavered. Exquisite costumes (the amount of work that must have gone into creating the numerous detailed costumes is staggering!), atmospheric lighting, pyrotechnics, beautifully designed projected backdrops for each new location… all combined with the onstage performances to make a truly memorable and enchanting production. Congratulations to all involved!