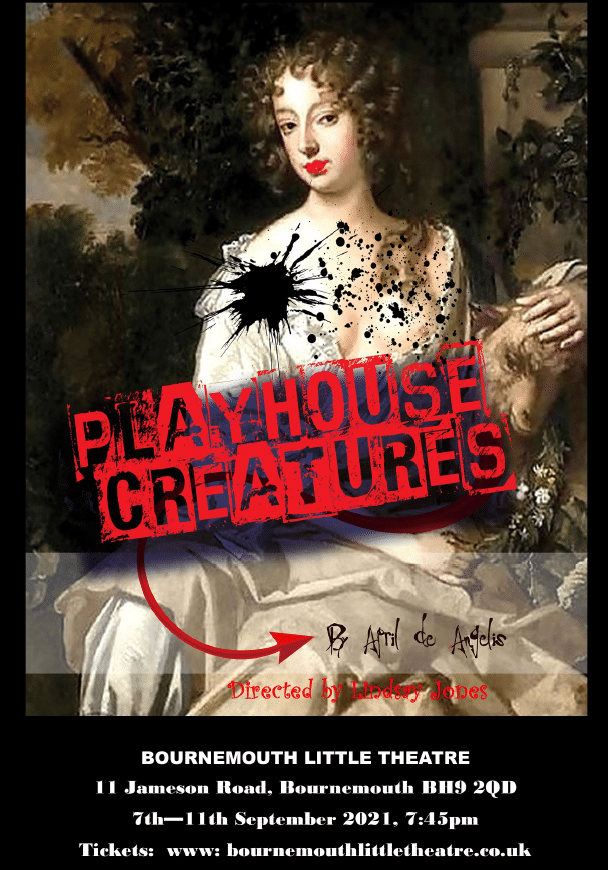 No-one could have known that my review of Timon of Athens at the Bournemouth Little Theatre in February last year would be my last review anywhere for 17 months. Tonight’s production of Playhouse Creatures is my first since then and only the second main production at this theatre in that same time-frame. Maybe one day someone will write a play about the COVID-19 pandemic – it might even be performed at the BLT.

Having recently read The Diaries of Samuel Pepys, who was an enthusiastic theatre-goer, I was excited to see a play set in the period covered by his diaries (the 1660s) – some of the characters in this play are mentioned in his writings. The suppression of the arts under the puritans was over and the newly restored monarch, Charles II, was an enthusiastic supporter of the theatre. For the first time women were (officially) allowed on stage.

This 1993 play by April de Angelis takes us on an emotional roller-coaster ride through the lives of five such women – a ride which is at times bawdy, often comedic but at other times shocking, gruesome or even tragic. Snippets of various plays from the period and earlier are shown in production or rehearsal by the women’s company – if I were an expert on the period I could perhaps identify them – but at times the distinction between the action within the plays within the play and the current play are blurred. Some themes which are still with us today are touched on, such as the paucity of parts for older women and the preference for sexy young women such as Nell Gwyn – brilliantly portrayed here by newcomer Lauren Killham. One issue which is not as prevalent today, but undoubtedly would have been at the time, is the tragic consequences for those actresses who became pregnant and had to leave the stage. The plague of 1665-66 is mentioned at least once, though the parallels with the modern world wouldn’t have been obvious when this play was written nearly 30 years ago.

The play opens with Issy Coombs as the old but loyal acting drudge and wardrobe mistress, Doll Common (Pepys mentions an actress by this name), who sits centre stage, telling us that the theatre used to be a bear pit. She returns to this theme at the end of the show and is the more-or-less unchanging factor on which hangs the rest of the play and its characters.

Experienced hand, Denise King, plays an exhausting part as the wife of the actor manager Thomas Betterton and the leader of the small cast of women players in her husband’s company. Although at one point she complains in character of having only 14 lines in one of their productions, in the course of the evening Denise rattles through hundreds of lines, including a long soliloquy in which she is conversing with her unseen and unheard husband. Bravo!

Mica Sharples, in only her second production with BLT, plays an excellent part as the haughty ingénue Elizabeth Farley, whose dalliances with the gentlemen personages of the court lead to tragic consequences. Her well executed downfall evokes some real pathos.

Molly Jackson, as Mrs Marshall, is an experienced and familiar face on the stage both here and on Brownsea. Her character is a bit more worldly-wise than the younger actresses but the aftermath of her affair with the Earl of Oxford provides some considerable humour and a chance to air the witches scene from Shakespeare’s “Scottish Play” which, although never mentioned by name, features quite prominently within this one.

Playhouse Creatures is not an easy play to get to grips with and is certainly not one for those who are easily shocked or offended.

There is a lot of humour in it, some interesting choices of anachronistic inter-scene music, but also some thought provoking themes.

These five modern-day actors bring it to life very competently. The old hands are as good as ever but the two newcomers, Mica Sharples and Lauren Killham, are a revelation and I hope to be seeing more of them.