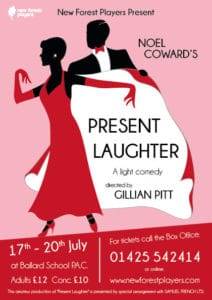 Present Laughter is an amusing play written by Noel Coward in 1939 but not actually produced until 1947 because, whilst rehearsing the show, the Second World War started and British Theatres closed.

The plot depicts a few days in the life of the egotistical, successful and self-obsessed comedy actor Garry Essendine as he prepares to travel to Africa for a touring commitment. A series of hilarious events take place which Garry has to deal with – women who want to seduce him, placate both his long-suffering secretary and his estranged wife, cope with a crazed young playwright and overcome his ‘mid-life’ crisis. The character is a caricature of the author’s real-life persona, as Coward acknowledged.

David Luker who plays Garry the egotistical actor is larger than life in his role, he is never off the stage and delivers his lines with timing and perfection. Whilst he had to be prompted a couple of times, this did not detract from his magnificent performance. The whole play revolves around him, he never once lost character and was always reacting to his fellow players. It was difficult to take one’s eyes off him as you never knew what reaction was coming next.

Liz Essendine was played by Jane Sykes and is excellent as his estranged wife; Jane lends precise words real weight so that when she accuses Garry of his wayward behaviour the charge hits home. She is both warm and a very likeable character. Together Jane and David also lend the climax a rueful tenderness that explains why the play was originally entitled Sweet Sorrow. Garry’s devoted secretary is played by Wendy Beaumont with humour and wonderful facial expressions. You only had to look at her and you were laughing.

The show opened with Daphne Stillington played by Tina Ward sitting on the sofa; she had stayed the night having “mislaid her latchkey”! I found her accent and affectedness charming, she was a very believable character who brought the stage to life every time she appeared. Her eyes shone with excitement as she drew the audience in with her mischievousness. Kate Smethurst who played Joanna was also superb in her role as wife of Henry, mistress of Morris and hopeful lover to Garry. She strutted about the stage with confidence and conviction in her promiscuity.

Martin Cox (Henry Lyppiatt) and Gordon Baker (Morris Dixon) both played their characters well, interacting with their fellow actors as did Judy Spooner (Lady Saltburn), who made a brief appearance but looked and dressed magnificent. Fred played by David Woods came on and off the stage, making his presence known every time, bringing laughter from the audience without him even having to speak; very commanding use of the stage.

Leuan Luker as Roland Maule was wonderful, he pranced about the stage taking his role very seriously and having us in fits of laughter. Last but not least, Maggie Soares as Miss Erikson certainly put her own mark on this character, I absolutely loved what she did to the role; obviously a very experienced actor who picked her moments with timing.

I thought the set design was excellent, very much in keeping with the 1940s. Attention to detail had been placed on the costumes, which I thought were fabulous, depicting the period perfectly. The whole play was stage managed well with precision and timing.

There were a few little glitches being the first night; the prompt, I felt did come in a little prematurely on some occasions, not giving the actors the pregnant pauses they were aiming for, and a couple of lighting issues which I am sure will be resolved. Having said that, it was a superb production directed by Gillian Pitt, of which the whole company and production team should be proud. Thank you for a very entertaining evening.