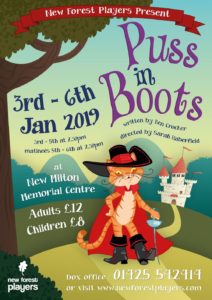 The Miller’s sons, Jasper and Jethro, and their adopted brother, Jack, congregate to hear the reading of their father’s will: while Jasper and Jethro receive a wealthy inheritance, Jack is bequeathed his adoptive father’s beloved cat – and a silver coin. It soon becomes apparent, however, that the greater legacy is not the money, but Jack’s favourite feline friend. A kindly fairy bestows Puss with a special pair of boots, enabling the cat to not only talk but also become the brains behind humble Jack’s attempts to find his fortune and win the hand of his true love, Alice. What Jack doesn’t realise is that Alice is a Princess who is also being wooed by an evil ogre…

Pantomimes are often a child’s first experience of live theatre, and it seems fitting that the New Forest Players’ latest foray into Pantoland includes the newest of performers (from the tiniest dancers in the Children’s Chorus, to the not-so-young stage or panto debutantes) and is enjoyed by an audience of all ages.

Max Lucas is very good indeed in the title role, his energy and stage presence combining to create a charismatic leader, with Lola Eldridge a delightful Mime Puss. Martin Mansfield is very entertaining as Queen Wendy the Won’t, his physicality in the conventional Panto Dame style, with his deeper singing voice working just as well in the more dominant role within the Royal marriage and resonating with a lovely tone, especially in ‘her’ lullaby to Princess Alice (the Queen’s rendition of ‘Hushabye Mountain’ being one of my evening highlights). Alan Whitty proves to be more than just a “Yes, Dear; No, Dear” spouse as King Wally the Will, and together Mansfield and Whitty portray a strangely endearing couple! Emily-Jane Charge (Jack) and Geena Morris (Princess Alice) also work well together, their voices, both lovely individually, blending together beautifully to deliver another of my evening highlights, ‘A Million Dreams’.

Martin Cox (Jasper) and Martin Bloor (Jethro) give good debut pantomime/stage performances, more bumbling, ‘Chuckle Brother’ types than out-and-out villains, which makes them rather lovable rogues as well as them being very funny, particularly when relaying the ‘Twelve Days of Panto’ with their love interests, Babs (Judy Anders) and Betty (Kerry Bloor)!

Tina Fagan (Good Fairy Priscilla) and Shannon Cook (her wicked sister, Witch Pernicia) are great together, exhibiting a real feeling of sibling squabbles between each other with their verbal rhyming battles; Cook has excellent physicality and a really good singing voice as she succeeds in giving Pernicia a lively and dynamic persona.

This is a traditional, some might say old-fashioned, family pantomime, but it is also a fine example of how good community theatre can be and why pantomimes remain ever-popular with audiences. With a large cast of all ages, Director Sarah Haberfield, Musical Director Lee Redwood and choreographer Tina Fagan have combined their unquestionable skills to bring about a thoroughly entertaining and cohesive collaborative production. There are some lovely characters amongst the ensemble, while the biggest smiles on the faces of the Children’s Chorus – with arguably the most beaming coming from the tiniest, youngest performers – show how much they are enjoying performing and are genuinely heart-warming.

Without giving away any surprises, Haberfield has ensured some delightful directorial touches and Fagan’s choreography is well devised to suit the mixed abilities of the cast, bringing out the best in all of them; the woodland creatures are very cute indeed and the Youth Chorus contains some very talented dancers. There is good musicality and the diction is crystal clear in the songs, helping to add energy and pizzazz to the production.

Although tonight there was evidence of some opening night nerves and technical hitches (noticeably with microphones and a couple of slow scene changes), I applaud the manner in which the occasional forgotten line was recovered in character rather than relying on a prompt and the pace rarely dropped throughout. The lighting and special effects are very good, creating atmosphere while still including adherence to the customary “pink lights for good, green lights for evil”, and the scenery, costumes and heightened makeup merge to bring a storybook aesthetically to life. This is a production to warm your heart on a cold January afternoon or evening and deserves to be performed to full houses.