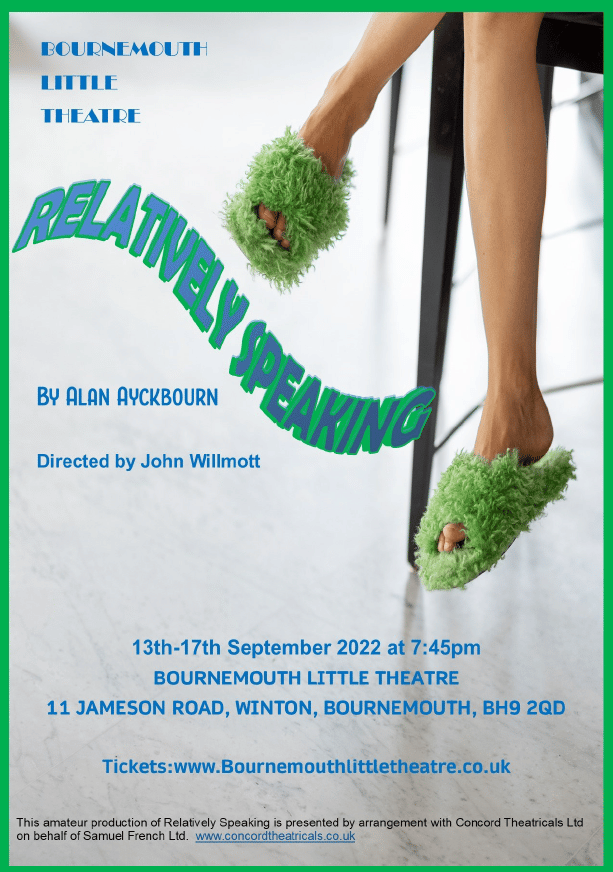 The Summer has passed, the rains have come at last and the nights are drawing in.  Doom and gloom has descended upon us with the war in Ukraine and a cost of living crisis – and then the TV schedules are full of the funeral arrangements for our late monarch.  This comedy play, which launched Alan Ayckbourn’s stage writing career originally titled Meet My Father in 1965, is just the play to bring a smile to your face and to chase those blues away.  There is no better place to do so than the Bournemouth Little Theatre; I have often said that this is one theatre that you should visit at least once before you die – to experience its charming and intimate character.

There are only two scenes – Ginny’s bedsit in London and the garden at The Willows, Lower Pendon, Bucks.  Both are expertly designed and created with period touches such as the patterned throw over the settee, the bead curtain and the 1960s posters.  The problem, as is explained at the start, is that it’s a big scene change and could we be patient for 5 minutes or so while they change it – maybe some big venue would have it on a carousel – but on the small stage at the BLT we wait, watch and wonder.

Three of the four members of this cast are familiar faces – James Bourner (Greg) and Georgina Stone, (Ginny) we have seen at the BLT as recently as June in The Kitchen Sink  and they have a great on-stage chemistry.  We have seen Carole Allen (Sheila) here in Timon of Athens, Cheshire Cats and Suddenly Last Summer – probably others besides.  Unknown, to me at least, is Peter Court, as Phillip.  Suffice it to say that these four actors; well experienced and at the top of their game; really make this play come to life – with all its comic misunderstandings, deceptions, counter-deceptions and unexpected twists.  The comedy timing is perfect, the facial expressions are wonderful, the direction, by John Wilmott, has added amusing touches – such as the “tennis match” side-to-side head movements by Greg as he tries to take in what Ginny and Phillip are telling him.  A lot of the humour is in the Ayckbourn script – but the key is in the execution and these four actors nail it.

I get stick from the tech. crew if I don’t mention them – so  I notice Norwegian Wood (1965) at the start and other incidental music throughout.  I have mentioned the scene change – the audience want to applaud but don’t get the chance – and the garden set is good too.

If you can spare £12 (even less if you are an OAP, student or member) from the money you have put aside to pay your heating bills – then get down to this cosy little theatre above a garage in Winton and have a good laugh.

The show runs every evening until Saturday (17th September) at 7.45pm.